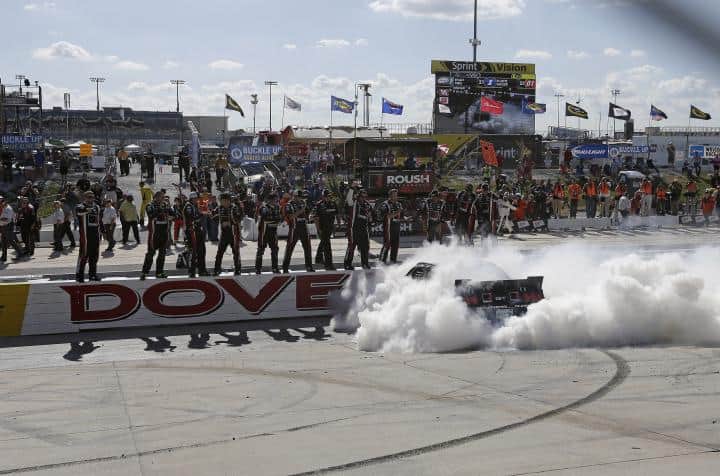 It was all about fuel Saturday afternoon in the NASCAR Xfinity Series. Chris Buescher was able to extend his championship lead, nursing a tank of gas 98 laps to a victory at Dover International Speedway in the Buckle Up 200.

The triumph is Buescher’s second of the season, but was more controversial than his first as he tangled with Roush Fenway Racing teammate Darrell Wallace Jr. with 10 laps to go to take the lead. Wallace had a tire rub, eventually having to pit with a flat left front with less than five laps remaining in the race. The No. 6 car ended up running 17th after starting on the pole and leading a career-high 52 laps Saturday afternoon.

Matt Kenseth led 51 laps at the Monster Mile, dominating for portions of the second half yet finished runner-up after cycling 11 seconds behind the race winner. Making his third start of the year in the Xfinity Series, the 2003 Cup Series champion seemingly had the perfect pit strategy until it was clear that Buescher had saved enough fuel.

After leading 70 laps late in the race, Erik Jones sagged to ninth at Dover. The No. 54 car was speeding on pit road during his final green-flag stop, tagged along with Joe Gibbs Racing teammate Daniel Suarez. Suarez, who earned the penalty two straight times fell to 19th in a disappointing ending for that organization.

Regan Smith came home third Saturday afternoon, his best career Xfinity Series result at Dover. The finish was strong enough to give him a $100,000 bonus as he outran Wallace, Suarez and Ty Dillon in the first Dash 4 Cash event of the season.

Chase Elliott ran outside the top 10 for the first half of the race in his JR Motorsports car. However, as the high line started to come in, so did the No. 9 car. The reigning champion came back to finish sixth and still sits third in points, 37 markers behind Buescher. Buescher has extended his championship lead to 15 points now over Dillon. Elliott is third, followed by Smith (-47), Wallace (-49), Elliott Sadler (-73), Brian Scott (-90), Ryan Reed (-95), Brendan Gaughan (-102) and Suarez (-103).

During the race, there were seven lead changes among five different drivers. The race lasted one hour and 43 minutes, with four cautions being thrown for 23 laps.

Smith’s Dash 4 Cash victory is an extra bonus for the team’s rather consistent efforts this year. He now has nine top 10s in 12 races thus far into the season, earning consecutive top fives to insert himself into the championship race. The No. 7 team has struggled at Dover in the past, but this year’s event had Smith inside the top five for nearly the entire contest.

Heading to Indianapolis in July for the next Dash 4 Cash event, Smith will be facing Buescher, Elliott and Gaughan for the next $100,000 prize. None of the drivers besides Smith finished inside the top 10 in last year’s race at the Brickyard, with Buescher and Elliott just behind him.

Teammates fighting for the lead late in the race usually battle cleanly. That was the case at Dover. Well, at least until Buescher got loose entering turn 1 and took the lead over Wallace. Wallace radioed in to his crew saying: “This is the third straw.” However, in a post-race press conference, Buescher begged to differ, saying that Saturday is the first time the two tangled. Team co-owner Jack Roush was not pleased with the confrontation, and stated he will be interviewing those involved in the situation to figure out what is going on.

BOWLES: Will This Teammate Rivalry Stick?

Sadler had an engine let go late in the going at Dover. The No. 11 car was running just outside of the top 10 throughout the 200-lap race, but began to report motor issues with approximately 30 laps left. He finished 21st, dropping outside the top five in the championship standings.

Brian Scott was trying to pass Ryan Blaney for ninth on lap 64 when the two connected entering turn 1. Blaney squeezed the No. 2 car to the low line, a move which caused Scott to spin. Jamie Dick then slammed into the Richard Childress Racing car, ending both of their days. Dick was involved in an earlier incident with Ryan Sieg, one where he was called a “jackass” on the sophomore’s radio channel and wrecked out of last weekend’s race at Charlotte.

I feel horrible for the @RCR2BScott guys and my @VivaRacing55 team. I made a mistake and it cost two racecars. @bscottracing

Scott’s anger, though was directed not at the underdog Dick but at the Ford driver he felt took him right out of the race.

“I feel like the [No.] 22 just crapped me getting into turn 1,” Scott said. “He didn’t give me any room. If you don’t have any air on the side of these cars, they just get really loose. Luckily, I got my hands off the steering wheel just after he hit me. You never like getting hits on the driver’s side.”

Blaney broke a a truck arm, which sent his No. 22 car to the garage. He finished 34th, ending the team’s top-10 streak to begin the season.

Jeremy Clements was running inside the top 15 throughout the race. After the first caution flag, he was outrunning Elliott in 13th, but fell back to 15th after the halfway point. However, with chaos on the final green-flag pit cycle, the No. 51 car rallied back to finish 10th for the team’s first top-10 result of the season and sixth straight top 20.

The victory for Buescher gives him a tremendous amount of momentum heading into the summer months. After his first win of the season just weeks ago at Iowa, the 22-year-old showed what he can do given the right equipment. According to Roush, while the team has collected more information the biggest factor has been continuity inside the Ford camp.

Edging out the Cup Series drivers on a weekend where there were three (Kenseth, Dillon and Kahne) that had potential to win, Buescher proved the nay-sayers wrong. The Xfinity Series regulars are much stronger this year than they have been in the past, especially in the Roush camp. Even without fuel strategy, Buescher and Wallace were running inside the top 10 for a large part of the race, continuing to audition for potential sponsors.

Only five cars finished on the lead lap due to the wild pit cycle. Obviously, Kenseth was going to win had Buescher run out of fuel. However, this young man is determined to continue his recent hot streak as he searches for his first NASCAR championship.

Wallace Jr.: “It is my teammate so I can’t really say much unless I see a replay. I asked the spotter after the race and he said we got run over. They talk about that Dash 4 Cash stuff and we got jinxed. I am glad I am not in it for the next one. I was saving fuel there and Chris [Buescher] just ran over me and he ends up winning. It should be interesting Monday morning. We just got run over. It sucks that it was my teammate. I thought he got help from the No. 7 but I just saw the replay there. I was saving fuel. I didn’t think I was holding him tight and the next thing you know, we are almost in the fence. The crappy part about it is we had a really strong Ford EcoBoost Mustang and we couldn’t get off pit road to save us and we got caught in dirty air and then we were in fuel saving mode. I thought we were doing okay until that little incident. I would say I am happy Roush won, but I am not.”

Buescher: “Honestly, I never know what to believe when it comes to the end of these races. Scott (Graves, crew chief) always tells me we are a couple short but you just never know how much you need to save. We saved quite a bit there at the end and that whole run really we were just trying to be easy on the throttle. Toward the end of the run we started to have to clutch it and let it coast at least half of the straightaway which is really tough to do. I felt like we were going so slow and it is hard to convince yourself to do it. We had just enough left to do the burnout and we got ourselves another win.”

Jack Roush: “We have got great drivers and of course, the Ford Mustang Xfinity car is a mature package that really had very little change last year. The guys worked hard and we had some influx of a couple staff members that have brought some information that has been useful from other teams and we also lost some staff members that moved on. NASCAR has a way of moving the technology around based on the people that change jobs from program to program.

“We benefited on an influx of information, we had continuity, the manufacturing side has gotten us nice consistent cars, the aerodynamic part has come on good and Ford technology has been great with the simulator effort they have behind us. It takes a combination of things. You can be off just a little bit and not be able to win a race and we had circumstances work out for us three times this year where we might not have won but have been able to. I am grateful for that. It has a way of averaging out though. I expect to give some of it back in the future.”