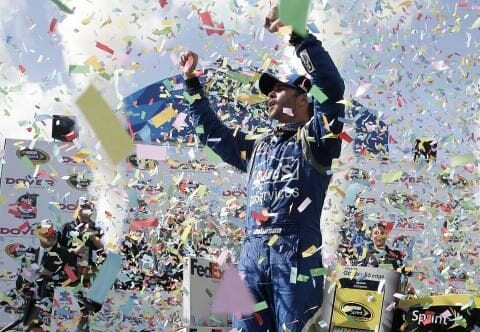 Jimmie Johnson may not have had the quickest car in the FedEx 400 at Dover International Speedway, a rarity based on his past success here. Instead? He proved to be the smartest, staying out during a final pit stop with 25 laps to go and out-dueling Kevin Harvick to emerge a rare “unlikely” winner at the Monster Mile.

Clean air, experience, and a few lucky breaks is what it took to hold off Harvick – who was on the same strategy as Johnson – to win Dover for a record-extending 10th time on a green-white-checkered finish.

“It was a long-fought day,” said Johnson, who led only 23 laps en route to a fourth victory in 2015. “It seemed like four or five of us could run the same speed and just couldn’t really pass. We did a great job of hanging in there.”

Harvick had more than a two-second lead over Johnson before a caution flew on lap 377 for a wreck involving Kyle Busch and Brian Scott. The unfortunate break for Harvick was a saving grace for Johnson, getting the best on the following restart as he became just the fifth Sprint Cup driver in history with ten or more career victories at a track.

“We kind of took a chance on pit sequence to pick off a couple spots to get us from fifth to third, [then] third to a shot at the win,” said Johnson. “Then, that last set of tires I was running Harvick down and we ended up staying on them. His car didn’t look as strong as it was early in the day and we were able to take advantage of it.”

The bright blue No. 4 Ditech car of Harvick settled for second for the seventh time in 13 races. The reigning champion pointed his finger on little things as his biggest struggles throughout the 400-mile afternoon.

“We just struggled at the end of the race on restarts, really all day on the restarts,” he said. “Once the track bar broke, we were pretty much in a box and just kind of had to hold on for the first 25 laps and if we weren’t in the front, then we struggled to just maintain what we had. All in all, everybody did a great job, and I think when you look at Dover it’s been a good race track for us.”

Second-year driver Kyle Larson pounced on the final restart to earn a third-place result, his first top five of 2015. For a moment, it looked like the No. 42 car could dice it up with the top-two drivers but it wasn’t to be as he’d have to settle for momentum gained after a rough year.

“I figured it would be tough to have a shot at Jimmie,” he said of the final GWC attempt. “Really happy with how our team rebounded from last week. We were terrible at Charlotte, and to get a nice run here this week is really good.”

The opening 150 laps on the “Monster Mile” appeared tame as only one debris caution waved. However, the pace changed quickly as a three-car accident sparked into turn 1 on lap 176, sending Trevor Bayne into the inside SAFER barrier nose-first with both HScott Motorsports cars of Michael Annett and Justin Allgaier getting swept up into the mess.

All three drivers returned to the track, finishing 41st through 43rd, respectively.

For Truex, the driver off to a flying start to the 2015 Sprint Cup regular season, leading the most laps for the third straight race (131) did not result in a victory. The No. 78 Chevy struggled on the final restart in which Kahne appeared to act like a blocker for teammate Johnson.

“He ran me down on the apron so I either had to let off or wreck all of us,” said Truex. “We had a good car today but it was never right. We were never right yesterday all through practice. Clean air was huge. When we were out front, we were OK. It just never turned good all day long.”

Polesitter Denny Hamlin, who led 118 laps, found himself in trouble on the backstretch following controversial contact with Bowyer. Nosing into the outside wall, Kurt Busch was clipped in the left rear by the spinning Toyota, causing significant damage to Busch’s Chevrolet as both drivers found their days destroyed with 13 laps left.

“I was racing the [No.] 27 for position when that happened in front of us,” said Busch, who limped to a 31st-place finish. “I had him on my outside so I wasn’t able to head to the wall. I saw (Hamlin) turn, and I knew I wouldn’t be able to avoid him.”

The younger Busch brother, Kyle, had a similarly frustrating day in his No. 18 Toyota. Running in the top five for a majority of the afternoon – the second time in two races since his return behind the wheel – Busch tangled with Scott on lap 377. The contact was severe enough to end both drivers’ days, finishing 36th and 38th, respectively.

Kyle exited the car under his own power and walked to the ambulance without issue.

One aspect of Dover that always plays a factor is its pit-road entrance. The steep 24-degree banking, combined with a 35-mph speed limit proved to be a problem for multiple drivers. Dale Earnhardt Jr. got nabbed for speeding on a lap 250 stop and Danica Patrick was caught on lap 333. Last week’s winner Carl Edwards, unlike the prior two, was too high on the clock exiting pit lane. All three drivers managed top-20 results but could have ended their days much better.

Further back, amongst the underdogs Alex Bowman drove his Tommy Baldwin Racing Chevrolet to a 20th-place finish on Sunday, the third top 20 for the 22-year-old in 2015 – a positive gain from all of 2014 where he managed just one top 20 for BK Racing.

The Sprint Cup Series next heads to Pocono Raceway for its 14th race of 2015. Their 160-lap, 400-mile event will be held in northeast Pennsylvania next Sunday.

Watching the last 30 laps or so of the race pretty much told you all that is wrong with NASCAR. When cars that took two and four tires can’t catch the leader who is running older tires there is something really wrong with the package. To me it seemed that the finishing order was based solely on pit stops and pit stop rotations verses actual on track passes. I know that we are told by some writers such as Jerry Jordan that the racing today is really great but I’m not seeing it. Dover used to be a great track but it seems with the package/tires that NASCAR is running now all the races play out the same way no matter the track.

I have to add that I’m not sure what area of the stands Jimmie Johnson was referencing when he said in Victory Lane that the stands were full to capacity but that’s not what I saw watching it on TV. Is he trying out for a Fox booth analyst spot?

I suspect Jerry Jordan is 20 something and this is all he has ever seen so I’m inclined to give him a break. If you’ve never had a piece of cake a slice of wonder bread may seem delicious.

I didn’t watch but tried to check in once in awhile to see what was going on, like the casual fan the bosses desire. After four straight attempts found the broadcast in commercial, I gave up even caring. Upon reading this story I am proud that I did not devote my afternoon to that event.

There are very few tracks on NASCAR’s schedule now that don’t produce an aero-push mess. Road courses and Martinsville are the only ones I can think of. I suppose Dega would also be pretty free of aero-push although both it and Daytona have a lousy current package for drafting/passing. It’s hard to believe that NASCAR could’ve done a worse in both creating and addressing this mess if it tried. It didn’t used to be this way. They really need to address down force and remove hundreds of pounds worth so mechanical grip can let the guys race.

Don’t like hearing that NASCAR is thinking of sticking with the 2015 aero-package for next year. Shaking my head typing this.