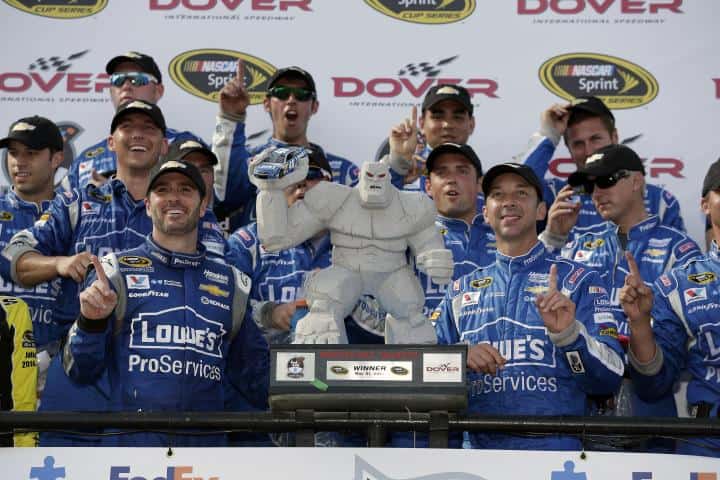 Success for Jimmie Johnson is what keeps him going. It makes his humble, happy and proud. What it does not do is provide him much time to think about his legacy in NASCAR.

The six-time Sprint Cup Series champion is chasing his seventh title and is looking as strong as ever. His latest triumph at Dover International Speedway might be the start of a trend for the No. 48 team.

Winning his 10th race at the concrete oval, Johnson became the fifth driver to win 10 or more races at a single track. His continued excellence in the sport continues to grow, and so does his resume. With 74 victories through his 484 starts in Cup, he is just two trophies away from tying Dale Earnhardt‘s 76 wins, which would put him sixth on the all-time NASCAR win list. As of now, he is nine wins away from Cale Yarborough for sixth and 10 behind Bobby Allison and Darrell Waltrip‘s mark for fourth.

“Man, I really don’t think about those things,” Johnson said in a post-race press conference at Dover. “I’m very thankful for the opportunity that I’ve had at Hendrick Motorsports, the amazing people I’ve had to work with, the support from our sponsor, Chad [Knaus] and Rick [Hendrick]. All of those things and the fact that I sit in that [No.] 48 car has allowed me to win the 10 races here (Dover) and have this great opportunity at history with Dale’s win total.”

With criticism that his wins don’t align with Earnhardt’s due to their different eras in racing, his legacy is a potential question.

His accomplishments are well-known around the globe, yet he has never quite received the respect that he deserves. Early Sunday morning, when Johnson walked across the stage during driver introductions, he was again greeted with an abundance of boos.

The same thing happened to Jeff Gordon years back when he continuously won races, but things are different with Johnson. He races in an era when people think the sport is all about the money, though in reality, it is a team effort that crew chief Knaus and he have built since day one.

Knaus has been atop the pit box for Johnson for 72 of his 74 victories, and looks to continue doing so for the foreseeable future. Through rough times and heart breaks, the two have created a bond similar to Richard Petty and Dale Inman.

“It’s not a goal that I put out in front of myself,” Johnson continued. “It’s right there in front of me, so I look at it and think, wow, this is incredible, what an opportunity. It’s a priority for me and something I want to do, but I’m almost in shock that we’re there.”

The continued success of the No. 48 team is unprecedented in NASCAR, where approximately 15-20 cars have a shot at winning on a weekly basis.

His mark of tying Earnhardt, which may very like occur this season, is a gigantic accomplishment for a California native who grew up racing dirt bikes and off-road vehicles. Along with approaching the top five in the sport’s all-time wins list, he also has multiple tracks that he is approaching 10 victories at.

Besides Dover, Johnson has seven wins at Charlotte, along with eight at Martinsville, five at Fontana, and four at a handful of other tracks. If he can continue at this pace, he may reach 10 victories at those tracks over the next few seasons.

As he continues to set the standards very high in NASCAR, Johnson is ready for a championship run once again. He is hungry for another title, and the 39-year-old is still in the midst of the peak of his career.

“I mean 74 race wins, 10 here, I mean, you can’t dream that big. I’m just blown away and honored by the success – what we’ve done with our opportunity and honored to have a shot at history with Dale and then the 10 wins here.”

I dunno about respect. A 10 race Champ? A crew chief with questionable “grey area” stuff. I as you now am not a HMS fan or any of their drivers, but out of all them I never seen Jimmie “mix it up” or “race” somebody. Sounds weird I know, always seems like he has more HP or nitro and just runs thru the field and when things aren’t going his way a self inflicted spin or two. I know, I know. Jeff mixes it up much more than Jimmie ever did, at least I can respect Jeff’s skill. Strange, I know..my opinion of course.

I’m glad I’m not the only one who feels that way about Johnson. I used to think Gordon was the king of the “don’t touch me” aero snoozers. Don’t mix it up and whine if anyone else does. Compared to Johnson, Gordon looks like Bobby Allison or Tim Richmond.

It’s often hard to see how hard the driver is pushing the car. I’d say more so with the last couple generations of cars or maybe last 3. When the guys ran the bias ply tires you could see the cars sliding around a lot more. They would often do a four wheel drift. The radials (Earnhardt Sr. complained about this) would “hang on” longer but then would suddenly break loose.

During on of Jimmie’s earlier Championship runs he was racing Jeff Gordon at a track (can’t remember which one) and the announcers were losing their minds. Johnson kept trying to pass Gordon for the lead and lap after lap he was nearly wrecking. They were saying he was foolish to keep trying as he’d throw the Championship away for the few points he’d gain. He finally completed the pass. After that I could see he really would mix it up and go for it.

As for claims of cheating. That is part of motorsports at all levels. Always has been and always will be. If you aren’t working the gray areas and beyond then you won’t even be competitive much less win any. Just because some others haven’t been caught doesn’t mean they aren’t doing it. And plenty have been caught before. Roush, Gibbs and Penske (say it ain’t so Captain! LOL) have been caught in the recent past. Heck, Childress just had their problems getting caught with drilling their tires.

If you have any doubts about everyone cheating then I’d point you towards any number of books on racing. There are plenty of them that detail what they did including Darrell Waltrip’s admissions. Give yourself a treat and check them out. You’ll laugh at their creativity.

Nobody is saying that other teams don’t monkey around with things, the subject matter is Jimmie and how often he and his crew chief get a slap on the wrist and things are magically absolved, where others get the stick to the wall treatment and the scarlet “C” pinned to their fire suits for the remainder of the season. HMS almost always gets an apology from Castle Daytona, with groveling and butt kissing galore for their “what were we thinking moment”. And no, I don’t see Jimmie’s brilliance at all, I see a lot of whining from the two premiere HMS drivers …”don’t race me, and how dare they, don’t they know who I am”? One just does it more than the other, and one at least shows he can hustle a race care if he is forced too, not that he likes it. Jimmie just runs on the track and has a strange way of driving like other cars are not there, and the way he drives..they are not. How does he “mix it up”. I don’t see it. But as they say..it is what it is, and who the hell am I? I am just a less and less interested on way to being a non fan. Kinda sick of all of it, and I wish I did not feel this way.