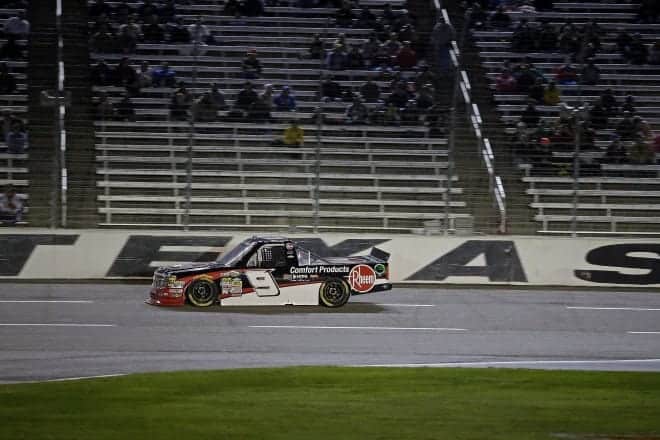 The Truck Series, paired with IndyCar this weekend is struggling to fill their 32-truck grid. NASCAR has released the entry list for the June 5 Camping World Truck Series WinStar World Casino & Resort 400 at Texas Motor Speedway; as of now, only 27 teams are listed, meaning the field will run five short. The race, a NASCAR standalone, will be run as part of a companion weekend with the Verizon IndyCar Series.

With the Sprint Cup Series running in Pennsylvania, none of the series drivers will make the trip to Texas. Instead, Truck Series regulars will get a chance to compete amongst themselves for the win.

Jennifer Jo Cobb will pilot her self-owned No. 10 Grimes Irrigation & Construction Chevrolet, just one week after creating controversy when she walked onto the racing surface at Dover to voice her displeasure following an incident with Tyler Reddick. Penalties for the incident could be announced as soon as tomorrow.

Cup veteran Joe Nemechek will return to his own NEMCO Motorsports No. 8 Chevrolet. Nemechek’s son, John Hunter, is the typical driver of the vehicle, but the 17-year-old remains too young to compete at 1.5-mile tracks.

Daniel Suarez will return to the No. 51 ARRIS Toyota for Kyle Busch Motorsports, as will Brandon Jones to the No. 33 GMS Racing Chevrolet.

Timmy Hill will pilot the No. 94 Chevrolet for Jay Robinson. Ryan Ellis will compete in the No. 50 BurnieGrill.com Chevrolet for MAKE Motorsports.

The NASCAR Camping World Truck Series will return to Texas Motor Speedway on Thursday, June 4 for two practice sessions. The field will return on June 5 for Keystone Light Pole Qualifying at 6:15 p.m. ET, followed by the WinStar World Casino 400 at 9 p.m. ET on FOX Sports 1.

Another short field! I am fascinated by NASCAR’s inability to see just how much trouble this series is in. Maybe a few more Cupholes could push out the remaining regulars and finally put this mess out of its misery

JohnQ, it could be the ole “NA$CAR makes no mistake thing”. To admit, point out, or acknowledge anything other than everything is wonderful is just not done by Daytona. To do so would signal that a mistake could have been made and that would not do. I know this is a truck article but the chase for the cupholes comes to mind.