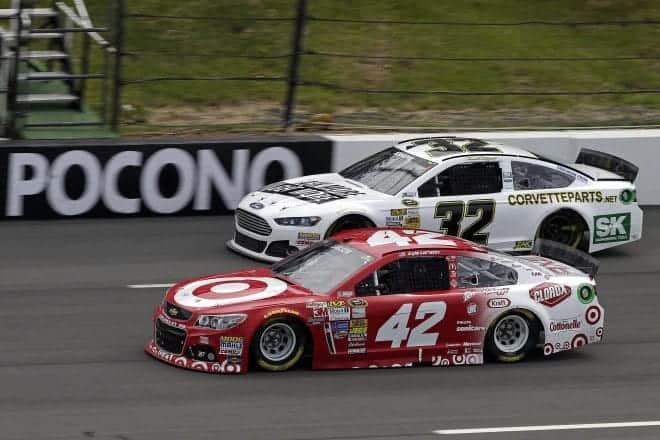 After 400 laps at the Monster Mile, 43 Sprint Cup Series drivers are heading to Pocono to take on the Tricky Triangle.

NASCAR released the entry list for the June 7 Axalta “We Paint Winners” 400 at Pocono Raceway on Saturday, May 30. The preliminary list contains 43 drivers, meaning all will make the race if no new entries surface before qualifying.

Xfinity Series regular Ty Dillon will return to Cup action for his third start of 2015. The younger brother of Austin will pilot the No. 33 for Joe Falk, prepped with support from Richard Childress Racing. Dillon will be sponsored by Yuengling beer as he makes his first career Pocono start. The 23-year-old driver last ran at Kansas Speedway, winding up 26th.

No other major changes are expected within the smaller programs. The three-car BK Racing team of JJ Yeley, Jeb Burton and Matt DiBenedetto will continue their full-time campaigns at the 2.5-mile Pennsylvania track. The team has traditionally struggled to make races, but all will qualify should no new entries arise. Brendan Gaughan will attempt to make the race in the No. 62 for Premium Motorsports, as will Mike Bliss in the No. 32 for Go FAS Racing.

The NASCAR Sprint Cup Series will return to Pocono Raceway on Friday, June 5 for practice and Coors Light Pole Qualifying at 4:45 p.m. ET, followed by two practice sessions on June 6. Coverage of the Axalta “We Paint Winners” 400 will begin on June 7 at 1 p.m. ET on FOX Sports 1.