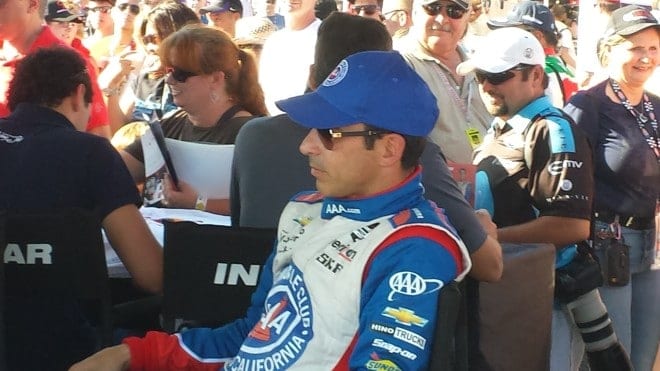 Sunday was far from a banner day for Team Penske in the Verizon IndyCar Series.

Championship leader Juan Pablo Montoya and Simon Pagenaud ran out of fuel in the closing minutes of the second Dual in Detroit while Will Power and Hélio Castroneves were both involved in the same crash with four laps to go.

The incident began when Tristan Vautier squeezed Power off the dry line that had formed around the drenched Raceway at Belle Isle. Since he was on Firestone dry tires, Power immediately lost control of his Chevrolet and spun left, directly into the path of Castroneves, who clipped his teammate and ended both of their days.

All three cars were racing inside the top 10.

With Chip Ganassi Racing teammates Charlie Kimball and Scott Dixon crashing each other earlier in the race, much had been made of the Team Penske inter-squad contact. However, Castroneves says there was nothing to it and called it a racing incident.

“I saw them (Vautier and Power) get together coming off the corner and I wanted to take advantage,” Castroneves told Frontstretch.com Tuesday morning. “There were only a few laps left and I needed to pick up a few spots.

“I didn’t expect Will to spin the direction he did because he was correcting the car right. But it did and he spun right in front of me.”

Power and Castroneves finished 18th and 19th, respectively and are both ready to move on to Texas this weekend where both cars should be contenders in the closing laps. Power led the most laps and finished second in the Firestone 600 last year while Castroneves is a four-time winner at the Fort Worth speed plant.

He believes victory number five is looming on the horizon.

“I’m absolutely excited for this race,” Castroneves said. “Chevy has done a fantastic job with this aero kit and we’ve been strong with it on both roads and ovals. We’ve got a bit of a new package [from Indianapolis] over there so we’ve still got to figure that out.

“We tested in the spring and there was no issue so I’m ready for Texas.”