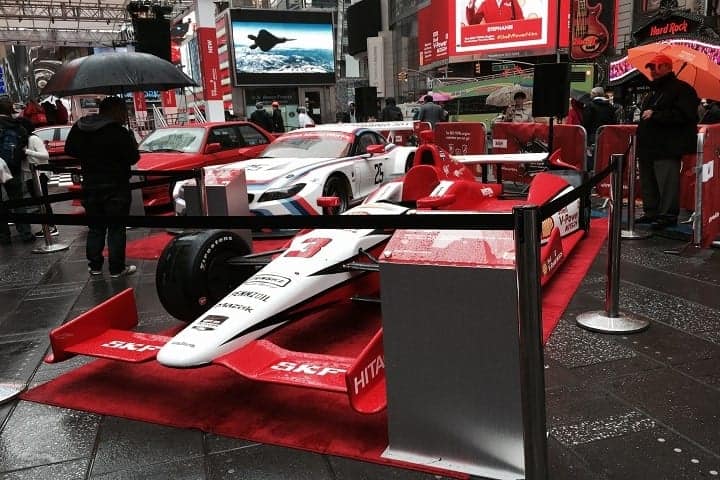 Amidst the bright lights of New York City, Helio Castroneves walked across the stage on Military Island in Times Square to announce the start of a new journey for Shell. The Verizon IndyCar Series driver for Team Penske shouted “start your engines” as a red and white Dodge Challenger with Shell logos slabbed on its doors and hood drove off into a crowd gathered in between an ABC television studio and Toys R Us in the middle of a wet, unpleasant afternoon.

But Castroneves’s smile as he made his way through the stage on a mock-gas station created by Shell created a roar from the crowd. Joined by Carson Daly, host of Last Call with Carson Daly on NBC, the two unveiled a 3,000-mile cross-country relay spanning Manhattan to Los Angeles, with stops in Chicago and Las Vegas.

They set up a mock Shell station in Times Square pic.twitter.com/LP99ssDmfK

“Having a partner like Shell is not only a name on the car, but Shell and Team Penske do great business-to-business,” Castroneves told Frontstretch at the event. “Unfortunately, we aren’t allowed to use the Shell fuel, which would be perfect, but because of the rules, we can use their other products. That’s the benefit of having an incredible company like Shell with us. Shell has been with Team Penske (in IndyCar) since 2012, and it is great because every time we have a good company like Shell, it shows what they are capable of doing.”

The Netherlands-based company launched its new Shell V-Power Nitro+ Premium Gasoline on Tuesday. The V-Power fuel is claimed to create a longer life for engines, along with making motors more efficient and is also fuel efficient.

“Nitro+ adds protection against wear and corrosion to the detergents our gasoline already contains,” Shell researcher Ed Nelson told Detroit Free Press. “Fuel comes in contact with moving metal parts in pumps, cylinder rings and injectors. Nitro+ reduces wear” by adhering to those parts. It also keeps water in gasoline from adhering to the metal parts to reduce corrosion.”

The Dodge, driven by Wayne Gerdes, a hyper-miler (technique to improve fuel efficiency) and blogger, set off into the rain-soaked New York City streets as he became the first person to fuel a car using the new fuel. Shell’s other gasoline products will offer small amounts of the new chemicals, but will not be as high in value as the V-Power gasoline.

“New Shell V-Power Nitro+ Premium Gasoline isn’t just a breakthrough for Shell; it’s an industry breakthrough in fuels technology,” said Elen Phillips, Vice President, Shell Americas Fuels Sales and Marketing in a press release. “For most Americans, cars are essential to their livelihood and represent a huge investment. That’s why our scientists continuously push the boundaries of fuels technology. We want our customers to know they are filling up with a premium gasoline that offers the best total engine protection they can get.”

Though Castroneves cannot use Shell’s new fuel in his racecar since the division has a deal with Sunoco, he believes the team’s performance its other products through Pennzoil can help him win his first IndyCar Series title a year after teammate Will Power won the championship for Team Penske.

“We have been in the top four basically since we started [the season] and we are right up there,” said Castroneves. “We are battling for the wins. We finished second many times, but the win hasn’t happened yet. It is still early in the season and we are going to continue fighting for it.”

The three-time Indianapolis 500 champion has two runner-up finishes this year (at New Orleans and Long Beach). After finishing second in the championship battle each of the past two years, Castroneves is looking to move up in the standings following a drop at Belle Isle this past Sunday when he wrecked on lap 64 with Power to finish 19th. Shell sponsored him in this year’s Indianapolis 500, where he finished seventh after leading a pair of laps.

This upcoming weekend, IndyCar returns to Texas, marking more than a year since his last victory. With Chevrolet dominating the sport, winning all but two events this year (New Orleans and race No. 1 at Belle Isle), Castroneves believes his No. 3 car will be a force to be reckoned with as the second half of the season approaches.

“It is a very competitive sport,” he said. “You have to keep making the most of opportunities and it happen sooner or later. It will happen soon. As long as you keep working hard, the dream [of winning a championship] will come true.

“Chevy did their homework during the preseason. At this point, you have to just keep up the hard work. The team is doing their job, and we are looking forward to give Chevy a championship as well. Hopefully, we can keep doing what we are doing because it seems to be working.”