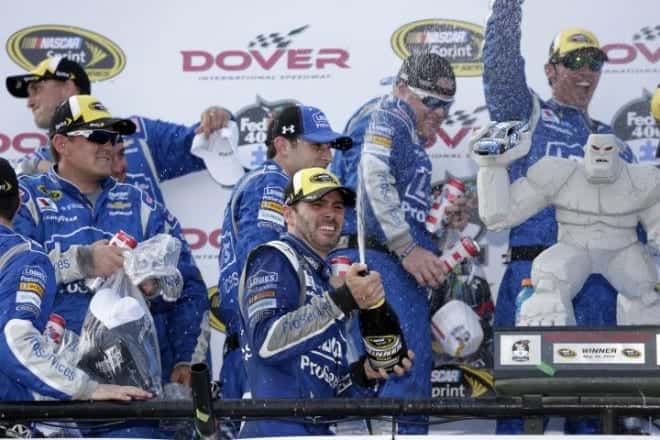 Well folks, if anyone in the country doubted Jimmie Johnson this year, it’s officially time to eat your words. He has 10 – count them – 10 victories now at the, the most of any driver all-time at the mile oval. Johnson took a commanding lead in the race and held off fast cars from Kasey Kahne, Kevin Harvick and Martin Truex Jr., who led the field from the pole at the start of the race. Johnson and the No. 48 team are back to being right where they want to be at this stage of the season.

Now, having these four wins (Atlanta, Texas, Kansas, Dover), through only 13 races, Johnson and crew chief Chad Knaus can now focus in on what tweaks they want to make to their ride with plenty of time before the Chase starts. What a fine place to be…

Speaking of being in a great place and performance, Toyota has really stepped up its game as of late. With Kyle Busch back in the seat of the No. 18 Camry, things are looking up for Joe Gibbs Racing heading into the summer season. Matt Kenseth, Carl Edwards and Denny Hamlin all have wins in the 2015 campaign. With Busch healthy again and clearly ready to compete, based on his strong performances at Charlotte and Dover, this summer could prove to be a strong one for JGR.

Now onto this week’s Mailbox questions from you our readers….

Q: Hey Greg, I know Jimmie Johnson and the No. 48 team were hit with a P1 penalty from issues at the Charlotte races. What happened to that, and why did they get to pick their pit lane stall for Dover? I thought that part of the penalty that NASCAR handed them? Just wondering. Thanks! – Paul J., Annapolis, Md.

A: Hi Paul. The No. 48 team did receive a couple of P1 penalties from NASCAR as a result of an “accumulation of written warnings for minor infractions” that had taken place back during the Charlotte race weekend for the Coca-Cola 600, according to NASCAR.

As a punishment for these penalties, NASCAR had planned to take away the team’s ability to choose where its pit stall would be at Dover this past weekend. But what Hendrick Motorsports and the No. 48 team did was really kind of brilliant. Knowing that pit strategy and pit stall selection is so critical to success at a track like Dover, they timed their appeal to the sanctioning body so that they wouldn’t be affected for the Dover race, and thus the “punishment” is deferred until the appeal is heard. Now whether or not HMS and the No. 48 camp intentionally timed the appeal, no one really knows for sure. But nevertheless, it’s a really smart move.

And sure, a win this weekend at the FedEx 400 benefitting Autism Speaks can’t hurt to make fans forget all about those “minor” infractions either.

Q: I heard about this “drivers’ council’ thing. Why hasn’t this happened already, and what are the driver’s talking to NASCAR about? – Kerry B., Winchester, Ky.

A:  Kerry, thanks for writing in. This new council of NASCAR’s top stars is really a positive thing for the sport. As I’m sure you know, in NASCAR, unlike the other stick-and-ball sports leagues in the US, the athletes don’t have any sort of union or formal group to speak to the sanctioning body through. So the formation of a group of drivers, with the goal of discussing with NASCAR their issues and how the sport can improve for today and for years to come, is a phenomenal thing. According to reports, drivers from across the garage area were present, including Hamlin, Harvick, Dale Earnhardt Jr. and others.

NASCAR has really shied away in its statements since the initial meeting took place over the weekend at Dover. NASCAR’s Senior Vice President, Brett Jewkes said to media: ‘NASCAR meets with drivers frequently on a wide range of topics. As part of our ongoing commitment to foster dialogue between all stakeholders, we’ve met formally with drivers on several occasions this season, including here at Dover. We’ll meet with them again later in the season as normal course of business. The meetings have been productive and we find the dialogue very valuable.”

Now to me that sounds a lot like, business is as usual around here, please don’t make a big deal out of this and start asking questions about what the drivers are angry about every week.

I could be wrong, but I hope that this new Drivers’ Council idea does in fact continue, and that NASCAR embraces it wholeheartedly in the coming months ahead.

Call me tin foil hat crazy, but last year with their “new” rules package Chevy DID NOT dominate they had COMPETITION! I would say Ford seemed to have the honors of shocking NASCAR and adapting, not something I feel they wanted or want going forward, imo. The love affair between the France family and Chevy is a hard combo to beat. So, it is no surprise the “slumpers” of last year have adapted well to the new rules change, who is to say who sat down with whom and said this is what “we” want.

As for the “Driver Council”, typical tactic of the people in charge to make you feel as if you have a say…well let me rephrase that, you have a “say”, they just won’t listen. But something is needed because the DRIVERS ARE FRUSTRATED and have been for some time. You don’t need to look far when you know where to look to validate my statement.

As far as the 48 penalties..oh please I am sure Brian is making sure the other teams are being spied on for their sins and making sure they whip themselves daily for penance. He is having his secretary work overtime to book vacations, Broadway shows and restaurants it takes a year to get into, to make Chad and his team along with Rick to know that he was off his meds at the time of those horrible mistakes of calling them out, imo of course..:)

Didn’t team owners form a council a few years back. I can’t remember hearing of anything positive or negative coming from that. The Drivers Council could be powerful but I don’t think they’re willing to give up their riches to right the ship and that’s what t would take. NASCAR fines the drivers for voicing any negative opinion so we will never hear what grievances they may have. I’d love to know how the drivers actually feel about the “Show”. It was predictable watching Brad Keslowski mature from a critical and outspoken kid into a polished NASCAR spokesman. We’ll see.

So the drivers are “talking” to NA$CAR. Didn’t they try that at the first Talladega race? How did that work out?

Brian and Hendrick (Chev) are happy. End of story.

With the massive ratings drop and faltering ticket sales, I can understand why Nascar would suddenly want to chat with the drivers.

Did they discuss the resignation of Brian France?

The drivers council is for appearance only. NASCAR will go through the motions and then do whatever the hell they want. Wonder how long it will take the drivers to figure that out (not long I’d bet).