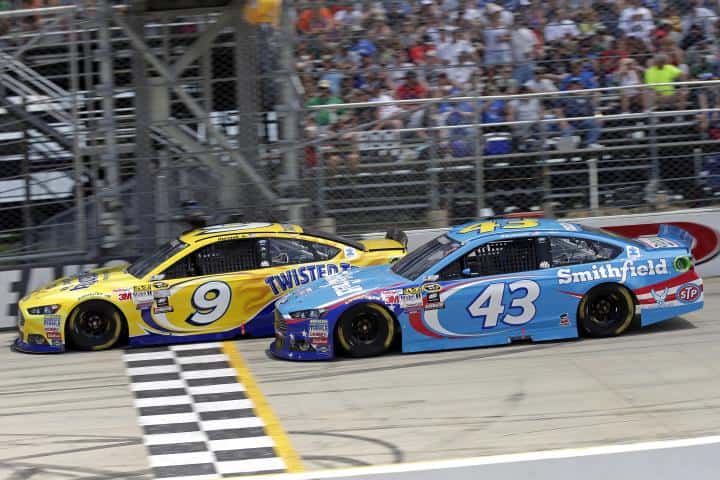 It’s one thing to be fast for most of the race, but it’s quite another to be the fastest at the end of a race. Figuring out just how to work the end game of a race can be pretty tricky. But that’s what championship teams do, and the No. 48 team got it right again Sunday at Dover. It’s certainly no coincidence that Jimmie Johnson and crew chief Chad Knaus have won six Sprint Cup titles. And sure, they’ve always been good at Dover, having won there a record ten times now. The give and take and trust in each other they have, it’s one of the more unique working relationships in all of sports. Do they get in a spat every now and then? Sure, but that’s just part of both of them wanting to win all the time. Now, they’ve got four wins together this season and all but two of Johnson’s 74 career wins come with Knaus on the box. And once again, the No. 48 will be considered one of the teams to beat come Chase time.

While it was no surprise that Johnson won again at Dover, it was a just a bit of a surprise that Kevin Harvick finished second. Not because Harvick hasn’t been good this year. He been very good, as you probably know. Dover has traditionally not been one of his strongest tracks, so for him to pull off a second there just shows how good the No. 4 team really is right now. As we enter the second third, or the so-called dog days, of the NASCAR season, it’s clear that Harvick and Johnson are the two favorites for the Chase title.

This seems to be the landing place for Martin Truex Jr. Once again, he had one of the best cars all day during a race. And once again, not quite having the ability to get the end game right left him with a top-10 finish instead of in victory lane. Truex led a race-high 131 laps in this one and was right there in the final laps. But on the final restart, he got caught behind a slower Kasey Kahne and that took any chance he had of catching Johnson or Harvick, who were on the front row then, on the green-white-checkered finish. Everyone keeps saying a win will come for Truex at some point this season. The challenge for him and his team now will be to learn from the past and not dwell in it, while still moving forward with what has been a fast car the past three weeks.

Ok, for weeks now, I’ve been a skeptic about Aric Almirola somehow being in the Chase at the moment because he was the only driver in the top 25 in points without a top-10 finish. But let’s give credit where credit is due here: Almirola was in or around the top 10 all day, and then with really almost nothing to lose, came in and got four new tires before the final restart. The result was moving up several places and earning a sixth-place finish. It was a good call by crew chief Trent Owens and a good job by Almirola to make it work. Now Almirola has a 46-point cushion on the 17th-place driver in the standings, Clint Bowyer.

Ricky Stenhouse Jr. got his mullet chopped this week. Even with his lack of success on the track, it’s a step in the right direction.

It was hard to tell from the replay just exactly what happened to Kyle Busch in his crash with Brian Scott Sunday. But no matter the situation, the crash and the resulting 36th-place finish is not what Busch needed in his efforts to reach the top 30 in points where a win would then make him Chase eligible. Busch, who missed the first 11 races due to leg and ankle injuries suffered during the Nationwide race at Daytona, is now 168 points behind 30th-place Justin Allgaier. With 13 races remaining in the regular season, Busch needs to make up 13 points a race on Allgaier to reach the top 30. Busch can’t afford many, and maybe any more, 30-something finishes if he wants to be successful in his Chase quest.

It seems Kyle Larson has been on the cold list here for a while, but a late rally to a third-place finish Sunday has him at least thawing out a little now. Larson is still 20th in points and sits 72 points behind 16th-place Ryan Newman. But we all know Larson is capable of winning his first race at any time and even if he doesn’t win, if he runs off a string of four or five top-10 finishes, he could find himself in contention to reach the Chase on points, too.

For the last couple of years, I had always wondered why Trevor Bayne was not given an opportunity to run a full-time Sprint Cup car. And first, to be fair, none of the Roush Fenway Racing cars are setting the series on fire right now. But Bayne sits 31st in points after crashing out of Sunday’s race and has not had a top-10 finish or led a lap this season. Bayne is certainly one of the good guys in NASCAR, but if the results don’t improve, his Sprint Cup career could be a short one.

Along with Larson, last year’s other top rookie was Austin Dillon. And, you would think, he might be ready to make a leap and get at least some top-10 finishes this season and contend for a spot in the Chase. But that’s not happening for him at all. Dillon has just one top-10 finish this season and also has not led a lap in 2015. It’s just a prime example that success in the Xfinity Series is by no means any guarantee that a driver will have success in the Sprint Cup series. Dillon sits 24th in points right now.

I think pretty much everybody is cool..strange year, indeed.