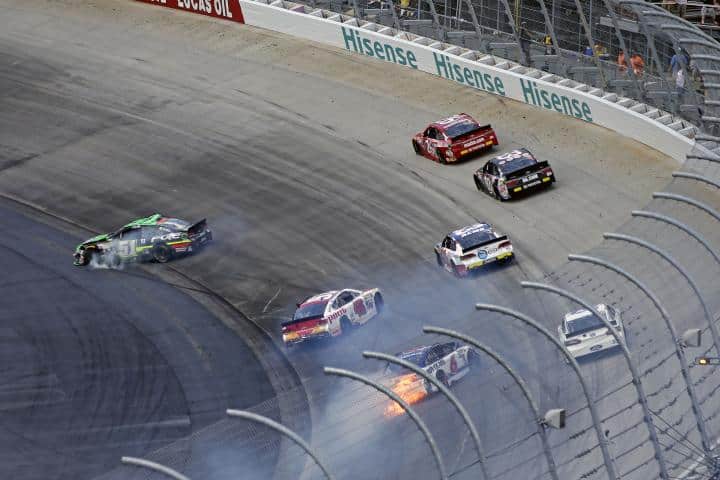 Trevor Bayne and Jennifer Jo Cobb were among five drivers among all three national NASCAR series to be penalized for infractions at Dover International Speedway last week.

Both drivers were expected to be penalized on Wednesday for failing to stay within their vehicles after crashing out during competition at the Monster Mile.

The behavioral infractions come from failing to follow a newer NASCAR rule implemented late last summer that says drivers involved in incidents must stay within their vehicles unless a mitigating circumstance such as fire makes them unable to do so.

The rule was enacted following the death of Kevin Ward Jr. in a sprint car race held in New York last August. Ward crashed following contact with Tony Stewart and proceeded to walk toward Stewart’s car to express his displeasure. He was struck by Stewart’s car as it passed by.

Both crashes during the Dover race weekend did not involve such circumstances.

During the Lucas Oil 200 on Friday, Cobb got loose after racing with eventual race winner Tyler Reddick early on and crashed along the frontstretch. After stopping, she exited her race truck and walked toward the racing line, where she gestured at Reddick as he followed the caution car around the track.

Cobb said that the action was due to a lapse of judgment. “I completely forgot,” she said. “It was a huge error in judgment on my part.” Following her first expression of frustration, she had to be restrained from returning to the track by a NASCAR official as the trucks passed by again.

Bayne was involved in a wreck during the Sprint Cup Series’ FedEx 400 on Sunday, making contact with Michael Annett coming off turn 4 and hitting the inside wall. Following the spin, Bayne exited his car before safety crews arrived and walked down the banking of the track.

Bayne was fined $20,000 and placed on probation through the end of the year.

In addition to Bayne and Cobb, Kevin Harvick’s No. 4 Sprint Cup team was given a P1 penalty for consecutive weeks with written warnings. At Charlotte, the team took three passes through inspection, and last weekend at Dover, it had a non-conforming exhaust pipe. The team will receive last pick in pit selection this weekend at Pocono.

The Xfinity Series also saw two teams penalized. The No. 97 team and driver Peyton Sellers were given a P3 penalty for an improperly attached weight during practice. Crew chief John Monsam was fined $15,000, suspended for the next points race, and placed on probation through the end of the year. Car chief David Jones was also suspended for the next points race, and both Sellers and team owner Victor Obaika were docked 15 points in their respective points standings.