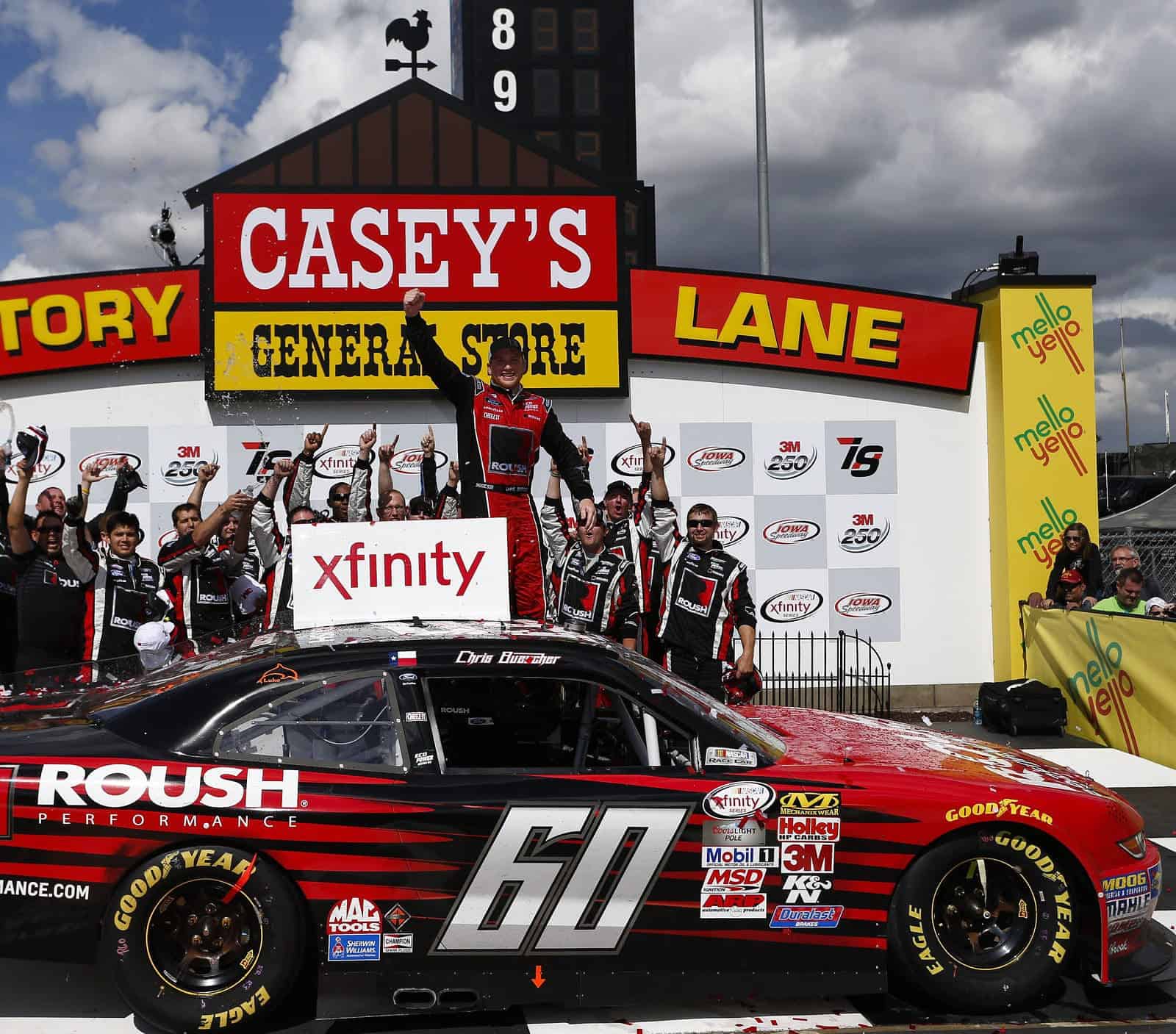 The often red and black No. 60 Ford Mustang has been paired with plenty of publicity over the past few weeks. 2012 ARCA Series champion Chris Buescher is leading the championship battle 12 races into the Xfinity Series season, doing so without any major funding.

Following a rookie year that rebounded after a Daytona DNQ, leading to a fuel mileage victory at Mid-Ohio plus a plethora of top 10s, Buescher has settled in at Roush Fenway Racing. His role is now one of a title contender, the team’s first since Ricky Stenhouse Jr. departed for the team’s Sprint Cup Series operation at the completion of the 2012 season.

“I take what we learned last year and apply it to all of the tracks,” Buescher said prior to Dover. “Everything that we were doing last year, we are doing this year. The guys have done a good job since the offseason of getting better racecars put together and putting faster Fords on the track.”

The improvement has come as Ford has piled more resources into the Roush camp. By the time the Xfinity Series reached Iowa Speedway in mid-May, Buescher was runner-up in the standings to Richard Childress Racing’s Ty Dillon. However, a triumph created a swap in points, and the No. 60 team has not looked back.

A victory at Dover, approximately nine months after his win at Mid-Ohio, proved that Buescher’s Iowa triumph was no fluke. The tenacity of his team, led by crew chief Scott Graves, has propelled this Texas native into the next level of NXS title contention.

“It is very early and points don’t mean a whole lot until the very last lap is run at Homestead,” said Buescher. “It is good to have that momentum and to run up there. We go in every weekend with the same intention, and that is to go win a race. As long as we keep that up, we’ll be just fine.

“It is just pretty much the same thing we are working on every weekend. It is just trying to make our cars faster, all the while trying to keep the drivability in them. That has always been the name of the game and if we can keep improving on it like we have through the offseason to the beginning of this year, we will be good until the end.”

With two wins on the year, he is the only Xfinity Series regular with multiple victories this season. Besides teammate Ryan Reed, who won at Daytona to begin the season, Buescher has left his mark as the lone driver running for points in the division with a victory.

So what is the biggest difference for the 22-year-old this year compared to last? Well, Buescher believes that the team’s longevity is playing a role in its success. Graves is more experienced now, and has moved past his abysmal season with Stenhouse at the Cup level in 2013, a year which saw three top 10s and little chance at wins. But that has changed with Buescher, a driver that is hungry for his first title and a chance at the Cup Series.

“We have got great drivers and of course the Ford Mustang Xfinity car is a mature package that really had very little change last year,” said Jack Roush, owner of Buescher’s car, during a post-race press conference at Dover. “The guys worked hard and we had some influx of a couple staff members that have brought some information that has been useful from other teams; we also lost some staff members that moved off. NASCAR has a way of moving the technology around based on the people that change jobs from program to program.

“We benefited on an influx of information, we had continuity, the manufacturing side has gotten us nice consistent cars, the aerodynamic part has come on good, and Ford technology has been great with the simulator effort they have behind us. It takes a combination of things. You can be off just a little bit and not be able to win a race and we had circumstances work out for us three times this year where we might not have won but have been able to. I am grateful for that.”

With the success, Buescher was given a shot at the Cup Series. He had previously tested Cup cars for RFR in the past, but this was his first shot at competing in an event. When Front Row Motorsports was searching for a substitute following the departure of David Ragan, it left Buescher sitting strong in rather underfunded equipment.

His first start in the No. 34 Ford came at Auto Club Speedway where he finished on the lead lap in 20th. It was unclear whether or not Buescher would return to the car, yet the success of driving the team’s Ford into the top 20 provided him with two more week-to-week deals, then eventually a two-race deal.

“It was good to get my feet wet and learn what I could in a short period of time,” he said. “Those guys are really a great group of guys that work really hard. We were able to get those five races in, and learn what I need to do when I get up to the Cup Series on a full-time basis. It was a good time and I really appreciate the opportunity.”

Through his five starts at the Cup level, his lone finish outside of the top 25 came at Texas Motor Speedway. The experience provided Buescher little information that he could carry over to the Xfinity Series. With severely different rules packages inside the two divisions, it makes it difficult for a young driver to take many lessons into a title hunt in NASCAR’s second-tier series.

“I don’t know that there is anything specific from that side that has helped us,” Buescher explained. “It is a different motor package, different rules on ride height and there isn’t a whole lot that we can apply to this (NXS). You just have to be aggressive early and make sure we get our spots when we need to. Those guys go very hard from the beginning and there is no down time, even with the races being as long as they are.

“Even with them cutting power, [Cup cars] are still very, very powerful compared to the Xfinity cars. The ride-height stuff [gives a feeling that] is more rigid. You don’t get the swoops through travel. You don’t get that in tracks where you would feel a lot of it like here (Dover). In our cars you will, but in those cars, you don’t get the feeling of the suspension moving.”

Now Buescher’s focus is back on the Xfinity Series, where he heads into an off weekend with plenty of momentum. A 15-point advantage over Dillon in the championship has elaborated on Buescher’s potential behind the wheel. However, with a lack of funding, it is unknown when he will get the opportunity to race in the Cup Series again.

In 12 events this year, Roush Performance Parts, which is a separate entity owned by Roush, has been on the No. 60 car seven times, including both of his victories. The same can be said about Darrell Wallace Jr.‘s No. 6 team, which has been soaked in Ford EcoBoost colors for the majority of the season.

The continuous sponsorship hunt for both drivers has created an in-team rivalry to make it to NASCAR’s top level. Buescher’s championship hopes will likely send him to the Cup Series sooner rather than later. However, without funding, there is little for the team to do for him. With some success already, sponsors have begun to express interest in pairing up with a driver that has a 7.5 average finish this season.

“It is just tough right now,” Buescher said. “We have had some one-off stuff come on board. We are talking to a couple of different people. We are looking forward to seeing what that will evolve into. We have had Roush Performance on board, and they are a bunch of great guys and girls. It is a fun sponsor. We get to do a lot of cool stuff with them. We are still hunting for somebody to come on board for a full season and really take on an anchor partnership.”

Buescher’s raw talent has provided him with the opportunity to race with limited backing throughout his career. It was the case during his ARCA Series time with Roulo Brothers Racing and the same has occurred with RFR.

According to Buescher, there is no plan in place to race in the Cup Series with Roush. But as success continues to pile in, this young man is showing he deserves a shot in a fourth car for the team in 2016. The No. 60 car is clicking on all cylinders, and Buescher has set his sights on being the man to beat as the Xfinity Series heads into the second half of the season.

OK, let me see if I have this straight. The XfiniCup series functions as an extended practice session for about a half dozen Cupholes. The series regulars functioning like sparring partners rarely show up in the top 5 let alone win. At the end of the season we all pretend the series is legitimate racing and Crown as Champion some battered fool that rarely if ever sniffed the Winners Circle.

Yeah John, that about sums it up. This series is waaaaayyyyy better now than when Randy Lajoie and the Green brothers were running in the late 90’s.

Great piece Joe! Tyvm! long time RFR supporter who’d love to see Chris or Bubba bring the NCS championship home this year. Chris & his team have been running great & I think the NXS championship seems like an early, but safe bet at this point. I believe sponsorship will be generated & that Chris will get bumped up next year (RFR #99 Cup car). I am also beginning to believe the plausibility of Bubba & Trevor switching seats in ’16. But I am not sold on that yet. Technically speaking, he is not a rookie, but he really is, considering this is his first full Cup season. Heck 8 of the 13 track so far this year he has never driven on in a RFR Cup car! So his recent trend of lapses in judgment & possibly skill are easily attributable to inexperience. And the RFR Cup cars are not exactly contending for wins either. Even Biff has only managed 2 top tens (in points races) all season. Plus, I do not see Bubba as a proven commodity or Cup worthy at the moment. But I will agree in the sense that the #6 Cup seat for ’16 seems to be up in the air. Between now & Homestead, if Bubba if he knocks off a couple victories & Bayne displays continuing mediocrity, perhaps the change happens. But it seems just as likely that Bayne could turn a corner & matures significantly between now & then. And if he does then it wouldn’t seem to matter what Bubba does. Ask again later in the season, but I do think Chris will be a Cupper next year. He has already shown his worth & abilities.