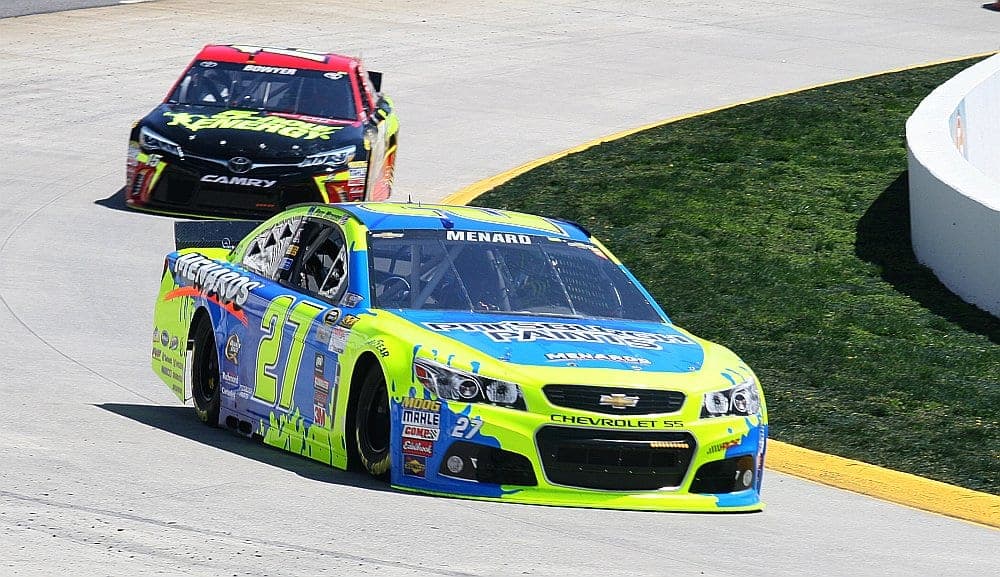 NASCAR’s northeast swing rolls through the Pocono Mountains this weekend for the Axalta “We Paint Winners” 400 at the historic Pocono Raceway. Jimmie Johnson shocked no one last week by attaining his 10th overall victory at Dover, a result that was largely expected given Johnson’s aptitude at the ferocious concrete mile oval.

But Pocono, ladies and gentleman, is a much different story. With its long straights, crazed restarts and silky smooth surface, the three-cornered circuit has been a bit of a wildcard since being repaved in the winter of 2011.

We’ve seen everything from big wrecks and major pit strategy shuffles to lots of topsy-turvy results at the track in recent years, and with a new rules package once again shaking things up at every speedway on the circuit, Pocono appears to be a track that will be tough to prognosticate.

1. How will the racing differ with the new rules package?

Pocono is one of the few race tracks that actually saw an improvement in the on-track racing product after being repaved. Pocono was repaved in 2011, and courtesy of the new pavement and shortened 400-mile races, the track has seen an uptick in on-track excitement.

Now as we all know, the 2015 intermediate track rules package has been somewhat hit or miss in terms of putting on competitive races. The package has honestly improved or maintained the quality of racing at some tracks (Atlanta, Auto Club, Texas, Kansas), and seriously hurt the racing at other tracks (Vegas, Charlotte, Dover, Phoenix). Some are thus wondering how the package will affect Pocono.

I’ll throw my hat in the camp that feels this package will maintain the solid racing we’ve seen here in recent years. Pocono, with its long straightaways and uber tight corners, is a track where the drivers carry so much speed going into the corners that they have to lift out of the throttle quite a bit on corner entry. Thus, while corner speeds should be up due to the new package, they shouldn’t be up enough to hurt the racing simply because Pocono is such a technical track. Unlike Charlotte, where the drivers hardly had to lift at all (leading to aero issues), the drivers will have to lift quite a bit in turns 1 and 3.

On top of that, the lower horsepower should mean the cars will be slower on the straightaways, and with how long Pocono’s straights are, that should lead to more draft-assisted passes since drivers will have more time to utilize the leading car’s wake.

Put it all together, and I think this could all help Pocono put on an even better show than what we saw here in 2014, and that is something a lot of tracks can’t and haven’t been able to say this season.

Dale Earnhardt Jr. has been the best driver at Pocono since the track was repaved in late 2011; frankly, there’s no one even close to him. Earnhardt was a stalwart in both races at the facility last year and used cunning strategy in each race to seal up two victories and a season sweep. He hasn’t delivered that sort of track-specific dominance since his early 2000s DEI days on superspeedway tracks.

The question I am sure most Earnhardt fans are naturally asking this weekend, then, is whether or not he can duplicate his 2014 results. Realistically, I think he can. Earnhardt hasn’t quite had the raw speed he had last year, but he and his team have still very much been a top five group on downforce tracks this year and easily have the chops to knock down a win on a good day. There’s really no reason to think he won’t be in the mix again on Sunday assuming he performs as well as he did here last year.

But the funny part is that Junior’s driving skills may not be the reason he ends up winning.

Indeed, Earnhardt’s real ace in the hole this Sunday will be the Hendrick powerplant fitted under his car. Some drivers estimated that Hendrick engines had as much as a 10- to 20-horsepower advantage at Pocono last year, enough to put even a mediocre-handling car into the top 10. Hendrick engines have shown that same blinding speed once again at horsepower-intensive tracks this year, so assuming the horsepower advantage is in play on Sunday, Earnhardt (along with his Hendrick teammates) appear to be a very safe bet.

3. Will Jeff Gordon be a threat?

Jeff Gordon’s farewell season has been a bit of a dud, at least by his standards.

Just one year removed from his best season since 2007, Gordon has been a ninth- or 10th-place car at best for most of the season, with Hendrick officials citing the new rules package as the reason for the team’s struggles. He has zero wins and only two top fives entering this weekend’s race. Not exactly championship-level numbers.

Pocono should be a breath of fresh air for the No. 24 team as it searches for the win that could give it more leverage heading into the Chase. Pocono has been a great track for Gordon in recent years, and his Hendrick powered engine should make him a lock for a top-10 run at the very least.

My question is whether the No. 24 team can capitalize on any of this. Gordon was perhaps the fastest car here in the August race last year before late-race strategy snafus relegated him to mid-pack, so we know he has what it takes to run well here as a driver. But can his team match his skills? Can it finally figure out this package so that Gordon can make one last championship run? Time is beginning to run out on the regular season, and while Gordon is in good shape to make the Chase, he’s going to need some momentum at the very least heading into the final 10 races if he wants to make a title run a reality. A top-five run on Sunday could go a long way in accomplishing that.

Paul Menard is not quite like other drivers. If he did not have the obscene amount of family money that he has, he would likely never have been afforded the sheer number of opportunities that he has been granted over the years in this sport to improve as a race car driver.

But the fact remains that Menard, courtesy of lots of development time, has blossomed into a damn solid race car driver with a very capable race team behind him, and that team is sitting 12th in points as they stand today.

That, of course, means Menard has a realistic shot of making the Chase on points, a feat that I don’t think many in the industry expected. He’s never been this high in the points this late into a season, after all. But is he for real, is his team for real? It’s something that many will be asking in the coming weeks as we edge closer to the Chase.

With Pocono on the table for this Sunday, a track that Menard has run quite well at in the past, it will be fascinating to see if this team can keep applying the pressure and deliver Chase-worthy runs. In fact, it wouldn’t be surprising to see Menard contend for the win on Sunday. His team has been known to score big on strategy gambles, and if he is running well enough on Sunday, his team could be in position to capitalize. Pocono has been known for featuring fuel-mileage-related strategy shuffles. Could that benefit Menard and send him to the Chase? I think it’s realistic.