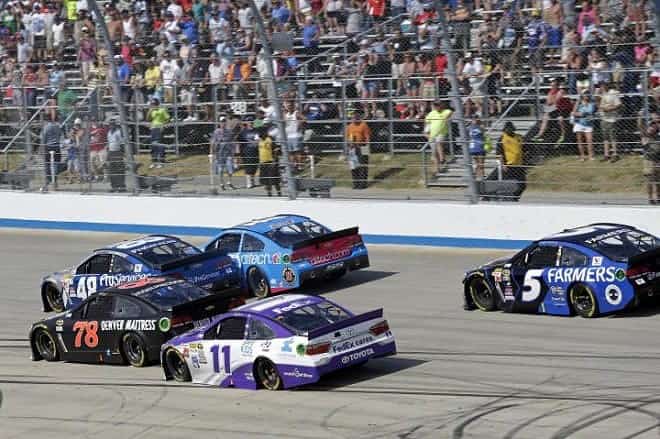 Holding a Pretty Wheel: What’s It All About, Anyway?

Once upon a time, a very long time ago, NASCAR was just about racing, plain and simple. Or at least mostly. Sure, the France family was in it for the money (and at the end of the day, that’s why people start businesses — to make money), but it was, at least for the fans who bought tickets and sat in the stands wearing their often-homemade t-shirts pronouncing them a fan of such-and-such driver, about fast cars and dashing drivers and tricky tracks.

Even then, the results weren’t always what fans hoped for — can you imagine baking in the South Carolina sun to see Ned Jarrett win the Southern 500 by 14 laps (plus two car-lengths, if you want to be technical about it)? Races often were decided by more than a lap. By today’s standards, many of those races would instantly be declared boring and three-fourths of the fanbase would be screaming at NASCAR for changes.

Now, for full disclosure, I wasn’t around for pre-modern-era NASCAR, but most people I know who were don’t complain of the lack of action back then. Maybe they’re looking back wearing rose-colored glasses. If we’re completely honest, we all do that with our fondest memories. But it’s also entirely plausible that they don’t complain because they understood the nature of the sport, that not every race was going to feature a door-banging finish.

Again, to be fair, the issues with the racing have changed. Unlike the days when drivers often won by a huge margin, drivers can catch each other; it’s passing that’s so difficult. And that is frustrating to watch. Track position should not trump speed and talent, period. On the other hand, you sometimes have to wonder what today’s race fans do want. If cars could pass easily and then run away, would fans then complain about it when a car was fast enough to win by half a lap or more?

And there’s the real question: can today’s race fans every really be satisfied with anything?

I’m not saying that the sport is perfect. It’s not. Everyone knows it’s not and what the problem points are. Besides the aero-dependence of the cars, there’s the giant Chase gimmick, drivers who are muzzled by sponsors, cookie-cutter tracks that don’t exactly promote great competition. You hear about them all the time, and yeah, there are issues.

But it’s hard to discern what fans really want sometimes. Races that have action throughout the field all day long (Bristol and Martinsville come to mind) are declared boring if there aren’t dozens of passes for the lead — apparently other positions have become irrelevant. Restrictor-plate races, which often have dozens of passes for the lead, are often declared boring because some team employed the “hang out in back until after everyone wrecks a few times” strategy. Fuel-mileage races – which can be nail-biters as they enter the final laps, are at times declared boring and the wins are said to be somehow less than a win in a boring race where fuel strategy doesn’t come into play. If a driver pulls a bump and run for a win, it’s dirty, but if he doesn’t, he’s a pansy who couldn’t carry Dale Earnhardt‘s driving gloves.

At some point, after running through all the “boring,” “terrible” racing scenarios, what’s left? What would make a great race for modern fans? Is there even such a thing? You have to believe that at one time, either the races were all great, or that fans took them for what they were, all with their moments of excitement and moments some wish might have turned out differently. Fans didn’t watch every race expecting a perfect race, but they watched and cheered for their favorite driver, no matter where he finished, and enjoyed a Sunday afternoon of dreaming and scheming from the sofa or the stands.

Now, it seems like some would find fault with anything, just for the pleasure of doing so. I know not all race fans are like that, but it does seem like racing has become, to some extent, a microcosm of a society full of entitlement and unrealistic expectations. On one breath, some would disparage one driver for winning too much (as if that was actually a thing), another for not winning enough, a third for driving dirty and a fourth for not using his bumper. If a driver is putting up hall of fame numbers, he much be cheating. If he’s not, he must not have any talent.

Motorsports media aren’t free of criticism, either (and sometimes, rightfully so, but nobody here is trying not to bring fans what they want). If they talk about a driver who’s dominating, they’re biased. If they talk about a backmarker, they’re wasting their time on someone instead of the leader, who is dominating. Talking about the private lives of drivers? That’s too much fluff. Ignore the private lives of drivers and you’re ignoring the hot topics.

Yes, it’s about balance — the key to all of this is balance.

One shift I’ve noticed is that in the late 1990s, you could find at least one fan at every race wearing something representing every driver in the field. I sat under the stands before a race at Loudon and took a tally, and it came out 43 for 43. That’s not the case anymore. The mid- and lower-tier drivers and teams seem to be invisible to race fans. Yes, it’s harder to find gear for some of those teams, but it’s not impossible to dig it up (or make it; homemade gear used to be more common). Many of the fans who complain about so-called boring or vanilla drivers haven’t seen enough of half the field to make that blanket statement. There are some great personalities to counteract those boring guys who win too much – but wait, they don’t win enough, so forget them. (Though if you want to look at a race from a fresh, interesting, humbling perspective, listen to the scanner of a small team for an entire race. It’s enlightening and it might convert a few naysayers.)

My point? It seems like there is a good-sized and very vocal group of fans who watch the sport not for the pleasure of watching drivers racecars, but for finding anything they can to pick apart. Instead of cheering for their favorite driver, this group seems to get more out of tearing the others down.

The sport is still special. Yes, fans complain because they know what the sport was and could be, but it wasn’t perfect then, either. There has to be something positive, something worth watching.

Otherwise, why do people still watch?