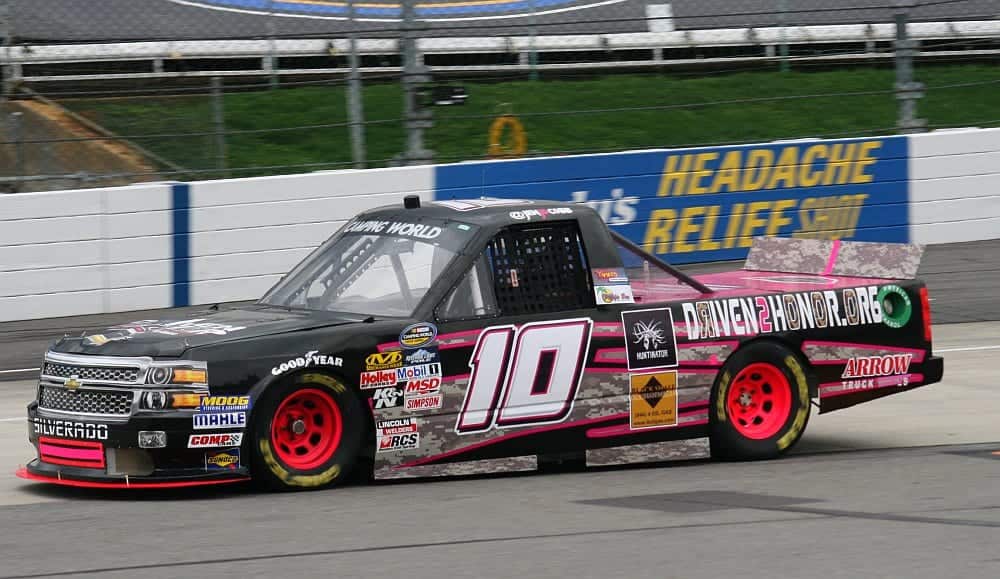 The Camping World Truck Series heads off to Texas Motor Speedway with a dismal 28 entrants for Friday night’s WinStar World Casino 400. Meanwhile, all eyes were on NASCAR this week as everyone awaited word from the sanctioning body about how it would penalize Jennifer Jo Cobb following her actions at Dover International Speedway last Friday.

In case you’ve been living under a rock and don’t know what’s going on, just 15 laps into Friday night’s Lucas Oil 200, Cobb’s No. 10 Ford had come to rest in pieces, seemingly off of the front end of Tyler Reddick‘s No. 19 Ford. Television replays were inconclusive whether there was actually any contact, but Cobb was sure there was and she wanted Reddick to know she was angry. After getting out of her truck, Cobb removed her helmet and walked up the track to gesture at Reddick as the field passed by; she repeated it again the next time the pace car brought drivers around, that time held back by a NASCAR official.

Late last season, the sanctioning body issued a rule change that prohibited drivers from leaving their vehicles until the safety workers arrived for assistance, and the video shown to competitors before each race even reminds drivers and crew chiefs of that rule. Not too long after safety workers arrived to tow away her wrecked truck, Cobb was promptly called in for a discussion with NASCAR. Following a “stern meeting” with officials, the driver of the No. 10 called the walk on the track “a huge error in judgment on my part.” For its part, NASCAR made it clear that her actions would not be tolerated.

Fast forward to Wednesday afternoon, and the penalty question was answered. Cobb’s actions were found in violation of Sections 12-1, 12.8b (behavioral penalty) and 10.4.2.1 (driver safety) of the 2015 NASCAR rule book. As a result, she was fined $5,000 and placed on probation through Dec. 31. Per the series rulebook, Cobb does have the right appeal the penalty.

“I believe NASCAR has acted in a fair and necessary manner,” Cobb told CATCHFENCE.com. “The irony is that there are no consequences to turning someone head first into a wall. NASCAR is diligent about our safety and that is something I have always appreciated. I hope we can continue to see improvements in rules and policies that best benefit the entire NASCAR community.

“We will not appeal and now can fully shift our focus on Friday night’s race at Texas.”

The problem was that Cobb not only got out of her truck, but also took off part of her safety gear and took 12 steps up the track toward oncoming traffic. Granted, the trucks were circling the track at caution speeds, but even at 45 mph, it’s still a dangerous situation. While Cobb still remained a safe distance from where the field ran, a simple mechanical failure (Juan Pablo Montoya, anyone?) could have turned disastrous in the blink of an eye.

And that’s exactly why NASCAR had to answer Cobb’s actions with the penalty. The reassuring thing, however, is that the fine was just $5,000. It’s still a chunk of change for a team running on just $300,000 a year, but it’s far from what a friend and I were speculating might happen. Instead of making an example out of Cobb and pricing her out of the business, the sanctioning body simply sent a message that its rules must be followed at all times, especially when it comes to the safety of the competitors.

Let’s face it, the reality is that Cobb didn’t walk up onto the track set on defying NASCAR. Instead, she was angry that she had a wrecked car just a handful of laps into a 200-mile race, and it’s likely that as an owner/driver, she was also thinking about the price tag for the repairs needed. The bottom line is that NASCAR had to react, and it did make the right decision. Safety is paramount in the sport, and anyone who violates those rules put in place in the interest of driver safety does need to be punished.

I’ll take a contrarian view, not that you haven’t made good points. I don’t think it was necessary for NASCAR to implement such a rule in the first place. I think it was a PR move to stem bad press from a media that couldn’t seem to distinguish sprint cars from the Sprint Cup series.

While what happened at the dirt track was tragic, I think it was a fluke occurrence.

Since there is that rule in place, I’ll say I’m also glad that the fine was manageable rather than what they did to Carl Long effectively booting him from the Cup series with that $200,000 fine.

AMEN! What NASCAR did to Carl Long was a bigger crime than his slightly oversized engine

Ok, back up the excuse train! Let’s not displace blame. When can not claim to have “forgotten the rules” while draped in the arms of two different track workers who are attempting (unsuccessfully) to direct her to safety. And irrational & counter-intuitive “passion” is not an explanation or justification. To the contrary, in fact, she provided a gleaming example of how & why such rules are required & have been enacted, essentially, globally. And no surprise she is not appealing. She, no doubt, considers herself lucky the punitive measures against her were not MUCH more sever! TBay’s infringement was (seemingly) MUCH less flagrant, yet he got a fine 4X bigger? Since when is the driver’s income taken into consideration? Even if income is a factor, the other head scratcher is that the #18 (KyBu), who is comparably daddy war bucks compared to these two paupers [JJC & TBay] combined, also exited his wrecked car prematurely & did not get so much as a warning? Nascar’s rules delineation & penalty/fine schedule has always been a black science that defies logical explanation, but this is slightly more mystifying that usual imo. Been a avid Nascar follower for decades, & I can usuly get my head around the fines & stuff, eventually, after grappling with it for a while, but not this time! This time is, like, pfft, whatever, are we in Pocono yet?

TBay should appeal the amount. Imo, JJC 5K, TBay 2K (not 20K) & KyBu 2K seems more, across the board, proper & equivalent, as compared to the driver’s actions on the track, imo, but we are clearly well beyond achieving that expectation.