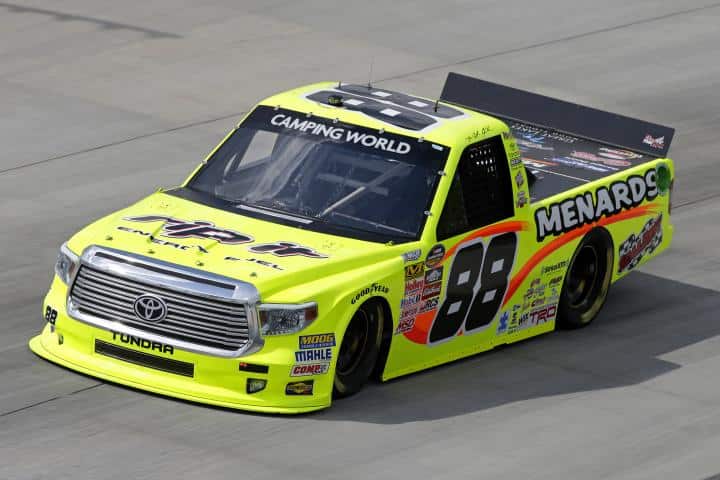 On Thursday, the Camping World Truck Series took to Texas Motor Speedway for two practice sessions in preparation for Friday night’s WinStar World Casino 400k. With the short field (now up to 30 entrants instead of the 27 on the initial entry list), everyone will qualify.  Regardless, speed and handling are still crucial.

Teams were generally limited to one set of tires on Thursday. As a result, the first session saw limited action since it was held in warmer conditions than the conditions the race will be run in. As a result, the 24 trucks that ran in the session combined to run 70 laps. The majority of the trucks that practiced only did one run. Only three drivers ran more than four laps in the session.

One of those three drivers was Spencer Gallagher, who turned in the fastest lap of the session on his fourth lap. Gallagher’s lap of 30.268 seconds (178.406 mph) was more than 15-hundredths of a second quicker than Johnny Sauter in second.  Tyler Reddick, Erik Jones, Cameron Hayley, John Wes Townley, Austin Theriault and Brandon Jones all turned in laps within a tenth of a second of Sauter’s pace. All but Jones did it with only one run.

In the second session, 28 trucks took to the 1.5-mile quad-oval and turned many more laps to dial their trucks in for Friday night’s 400-kilometer duel.  Here, some of the drivers that skipped the first session came into their own.

Points leader Matt Crafton, who chose to sit out the first session, turned in the fastest lap of Happy Hour on his second lap with a time of 30.241 seconds (178.566 mph). The lap actually tied with Reddick to the thousandth of a second.  However, Crafton gets credit since he is higher in points.

MAKE Motorsports had a very tough day on Thursday, but not because of anything that happened on track. According to driver Ryan Ellis, the team’s transporter broke down on the way to the track. As a result, the team got limited track time.

Crazy day with the hauler breaking down. Only got one or two laps each in the 50 and the 1 trucks. Things will be much better tomorrow!

Ellis drove both trucks in the session, but is scheduled to drive the No. 50 in the race. The No. 1 that he shook down for two laps is scheduled to be driven by Donnie Neuenberger. Ellis got the No. 1 up to speed and was 25th quickest. Ellis’s own No. 50 did not fully get up to speed and ended up at the bottom of the speed chart.