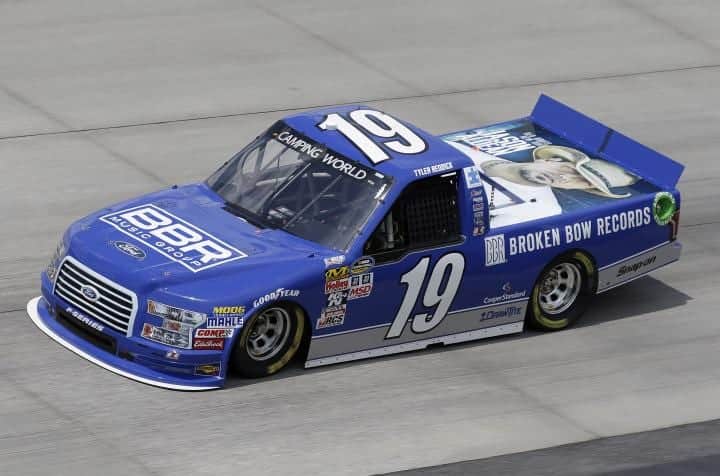 The duo left Dover International Raceway with differing opinions of what happened to send Cobb’s No. 10 Ford to the inside wall and wrecked just 15 laps into last week’s Lucas Oil 200. Fast forward a week and neither one seems all that interested in talking to the other about the incident.

“I get the feeling that she’s not going to talk to me about what happened, which is fine,” Reddick said Friday at Texas Motor Speedway. “I really don’t need to talk to her. We both know what happened. It’s racing that left a sour taste in one of the two’s mouths, but that’s normally how racing deals go.

“Obviously at this track, we have a lot more room to work with and work around. Dover is probably one of the more intense racetracks we go to. Those types of things do happen at racetracks like that that don’t happen anywhere else.”

Meanwhile, Cobb became visibly tense when asked about the incident between her and Reddick and was very quick to say “no” when asked if the two had talked.

“It would be nice if he would apologize, but he hasn’t shown any kind of… I’ve walked by him a couple times,” Cobb said at TMS when asked if she was interested in talking to Reddick. “It is what it is.”

For his part, Reddick maintains that there was no contact between the two.

“I was watching the [NXS] and Cup races later on in the weekend, and it’s crazy to watch. I didn’t see it a lot in the Truck race even when I watched it – I saw it once,” he continued. “In the Xfinity and Cup cars, when someone would get a little loose and get off the bottom a little bit and the guy behind would get a run on them, they didn’t have any contact but the car in front would just get so loose it was unbelievable.

“I figured that’s what happened. But that made it concrete in my mind. I had a run coming up to her and she had a lot of wheel in it. It was coming off the corner where you go from having the most load on your vehicle to having none, and it snaps you around. You have a hard enough time – if your vehicle is not handling good on corner exit anyway – just not hitting the wall or spinning as it is.”

Clearly, both drivers still have differing views. Since there’s really no conclusive evidence, both Reddick and Cobb will continue to move forward with their separate beliefs. Just don’t expect them to be the best of friends any time soon.