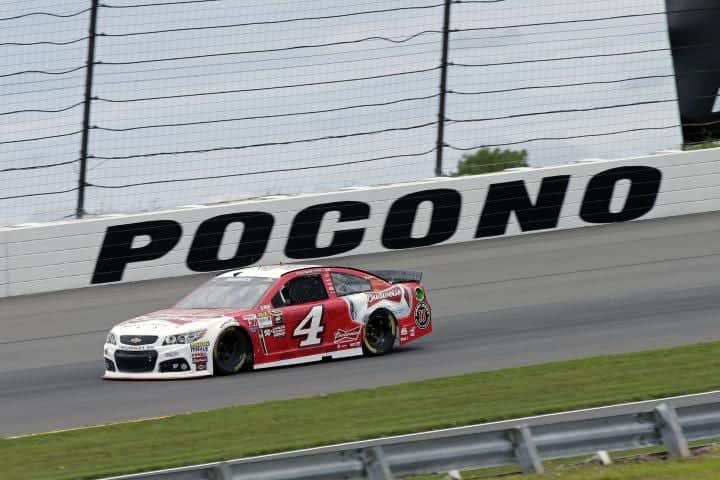 It’s been a good weekend to be Kevin Harvick. The No. 4 Chevrolet was fastest in opening practice on Friday, the first two rounds of qualifying, led Saturday morning’s practice and once again, Harvick paced the field in final practice.

Harvick posted nine of the fastest 10 laps run in the 55-minute session, including the fastest time at 51.144 seconds late in the session.

The second fastest driver in the session was Kyle Larson, who is still looking for his first career Sprint Cup Series victory. Posting a time well off Harvick’s lap, Larson’s fastest lap of the session was 51.343 seconds. Harvick and Larson were the two quickest drivers in single-lap, five consecutive laps and 10-straight lap speeds.

Kasey Kahne led the way for Hendrick Motorsports with a time of 51.454 seconds, which was good enough for third. HMS will attempt to win six straight races at Pocono on Sunday, dating back to Jeff Gordon‘s victory at the “tricky triangle” in August of 2012. Gordon was ninth in the session with a time of 51.569 seconds. Dale Earnhardt Jr., who swept the Pocono races a season ago, was the third fastest HMS driver and ninth on the speed charts (51.590 seconds). Jimmie Johnson was the slowest of the brigade, ending the session in 19th.

Martin Truex Jr. ran 26 laps in final practice and posted a fast time of 51.512 seconds, placing him sixth on the leaderboard. Joe Gibbs Racing only had two drivers in the top 10 in final practice, with the second being Matt Kenseth in eighth (51.576 seconds). Jamie McMurray completed the top 10 with a time of 51.601 seconds.

With final practice complete, the Sprint Cup Series will take the green flag for the 14th time this season in the Axalta 400 at 1:00 p.m. ET on FOX Sports 1.