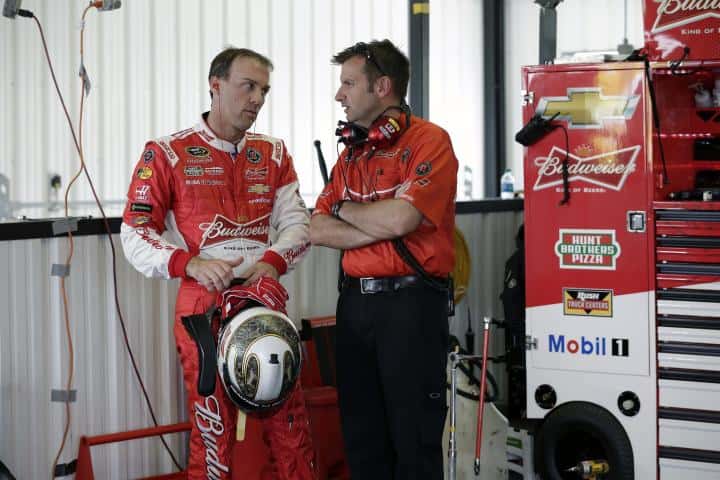 Kevin Harvick picked up exactly where he left off on Friday by being the fastest driver in the 43-car field as he was quickest in the opening Saturday practice for NASCAR Sprint Cup Series teams at Pocono Raceway. Harvick was fastest in Friday’s practice session and in the first two rounds of qualifying.

Harvick’s fast time of 51.236 seconds (175.66 mph) was 18-hundredths faster than Dale Earnhardt Jr. He is trying to become the first driver since Tim Richmond to win three consecutive races at Pocono, and posted a fast time of 51.254 seconds. Two-time Pocono winner Carl Edwards was third in the 50-minute session, followed by Martin Truex Jr. in fourth and Denny Hamlin completing the fast five.

Matt Kenseth was the third Joe Gibbs Racing driver in the top six with a fast time of 51.370 seconds. 2013 summer Pocono winner Kasey Kahne was seventh fastest in practice after running 21 laps. Kyle Larson, coming off of a solid top-three finish last week in Dover, was eighth fastest with Kurt Busch and Kyle Busch ending practice in ninth and 10th. Larson’s 10 consecutive-lap average speed of 51.576 mph was the fastest in the field. He also had the third fastest five-consecutive lap speed, with second fastest being Hamlin and fastest going to Harvick.

Jeff Gordon was 11th fastest in practice with time of 51,520 seconds. Jimmie Johnson, who went to victory lane in this race in 2013, was twelfth fastest in practice. Ryan Newman was 13th quickest (51.614 seconds), followed by Brad Keselowski (51.629 seconds) and Paul Menard.

The bumps in turn 2 and temperatures continued to cause problems for teams. Teams worked to figure out the most effective package while going over the bumps in the tunnel turn, with several teams also having issues with water temperatures. Drivers such as Jamie McMurray, who was 17th fastest, and Earnhardt at times during the session had their water temperatures pegged going down the straightaways. Both Earnhardt and McMurray are running Hendrick engines.