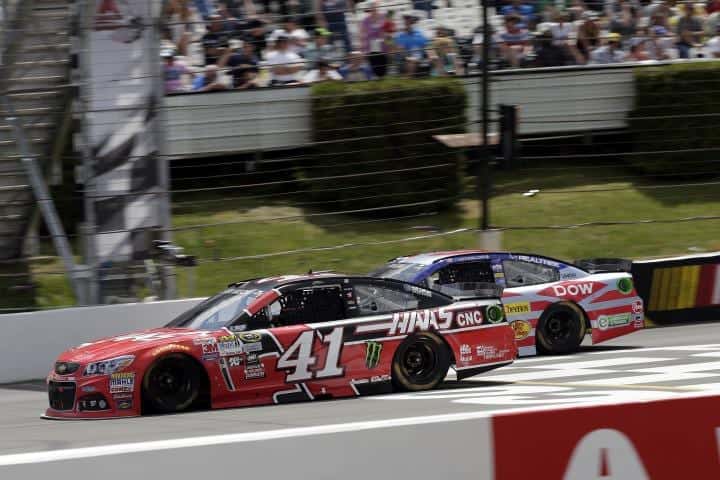 For the third time this season, Kurt Busch will lead the field to the green flag. The No. 41 car set the fastest time in qualifying at 50.676 seconds (177.599 mph) at Pocono Raceway for the Axalta ‘We Paint Winners 400.’

Edging out Coca-Cola 600 winner Carl Edwards, Busch is looking for his first win since 2007 at the 2.5-mile track. By earning a win at Richmond a few weeks ago, he has all but confirmed his place in the Chase for the Sprint Cup, as he now sits 15th in points after missing the first three races due to a suspension. With two victories at Pocono, the 2004 Sprint Cup Series champion is aiming for his third top five in four races at the “tricky triangle.” This is Busch’s 19th career pole in his 518th career Cup Series start. The pole also marks the fourth for Stewart-Haas Racing this season.

“It’s a triple whammy of track position, pit box selection, it helps with race strategy and then to be in that clean air, you get to dial in your car when you are up front,” Busch said in a post-qualifying press conference. “There are times when you work all day to recover from a poor qualifying run, and you are stuck in that dirty air. When you do get to the front, then you don’t have the perfect balance to win a race. We did a lot of good things today during practice, and we hope to back that up tomorrow.

Edwards is on the front row for the first time since he joined Joe Gibbs Racing this year. His previous best starting position was third (twice, Bristol and Charlotte). Martin Truex Jr. starts third for Furniture Row Racing after being 22 hundredths of a second off Busch’s pace.

Rounding out the top five are Jeff Gordon and Kevin Harvick. Gordon is running a special paint scheme at Pocono, featuring Penn State on his No. 24 car. Harvick was quickest during Friday’s lone practice session at 50.867 seconds, but will start in the top five for the first time since Richmond. He said he missed it in turn 1, but overall, the car is relatively fast.

Last year’s pole winner for the August race at Pocono, Kyle Larson, qualified 15th for Sunday’s race. Finishing fifth and 11th, respectively, in the two races at Pocono last year, he is looking for his second consecutive top five after finishing third at Dover.

“It seems like when you come to Pocono, there are a lot of different fuel strategies that go on,” Larson said. “I can make up a lot of track position just by making odd-ball calls on pit road. Our guys are really good at that, and we should have a decent race on Sunday.”

During the final round of qualifying, four-time Pocono winner Denny Hamlin spun out without hitting anything. The incident brought out a red flag with 39 seconds left in the session, which meant that five drivers failed to turn a lap, including Hamlin, Jimmie Johnson, Kyle Busch, Joey Logano and Kasey Kahne. For the first time since Kansas, Hendrick Motorsports had at least one car (three at Pocono) in the final round of qualifying.

The majority of the field has complained about the bumps in turn 2 on Friday, something that has sprung up after the track endured a rough Pennsylvania winter. Some drivers believe that the bumps have been caused by a fountain that was built on the outside of the track by the entrance to the tunnel turn. However, Brandon Igdalsky, President and CEO of Pocono Raceway, immediately took on the task of attempting to fix the bumps after the race weekend is completed.

you know , I am personally sick of these tracks “fixing” after the fact. They didn’t know these hills existed? Come on. Hate on the drivers all you want but it wasn’t just one of them voicing concern, it was many and they were not “whining”. And the debacle with the Hamlin spin, is a wonder..and no it wasn’t the drivers fault “waiting till the last minute”. Nascar screws up again.