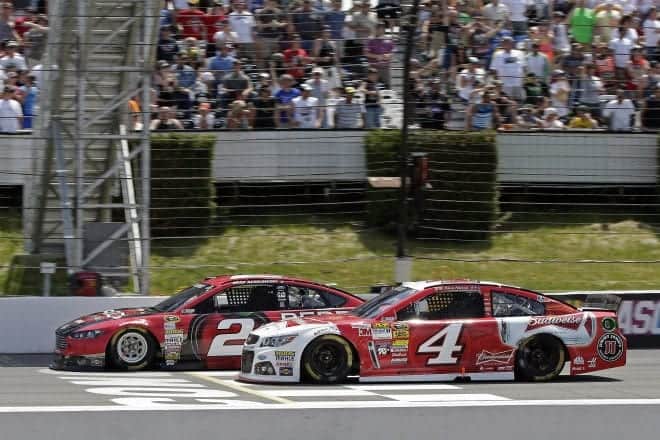 Miles the Monster reached out and grabbed a few drivers at the end of the race last week, putting a spin on quite a few fantasy teams. But as we continue NASCAR’s Northeast swing this week, there’s a 1-2 punch of an organization who continues to stand out. The Kevin Harvick – Kurt Busch duo looks to be strong as ever, Stewart-Haas Racing positioning them as title contenders halfway through the regular season. Harvick was the fastest car in the first practice, and then Busch put it on the pole for this week’s Axalta 400. Denny Hamlin, who is usually fast at Pocono, also remains near the top of the charts, waving the flag for a resurgent Joe Gibbs Racing. One week after taking the Dover pole, he had a spin in the last session of qualifying but kept it off the wall.

Pocono is a bit of an oddball not only in its triangular layout but in how we need to approach it for Fantasy Points. There are not many laps to be run here, as the track is 2.5 miles and the race is only 400 miles long. Normally, this length would mean you would want to look at some front-to-back guys; however, I am going to go with a little different strategy this week. Halfway through the “regular” season, I’ll be honest: it is about time I get on the Martin Truex Jr. bandwagon. Truex has been fast everywhere and is an undervalued pick; it’s time to get him on your team this week before he becomes more expensive.

So who else made the list? Read below to find out. As always, the prices listed are those that you would have if you have been following along with my team week-to-week.

No. 4 Kevin Harvick $28.00
Harvick remains a threat each and every week; this one is no exception. The Sprint Cup point leader was fastest in the first practice and in previous races this year that means trouble for the competition. Harvick qualified fifth and should be a factor early and often during the race; his nine top-two finishes to start the year have tied a NASCAR record for the modern era through 13 starts. (Bobby Allison ’72 and Cale Yarborough ’77, in case you’re wondering)

No. 78 Martin Truex Jr. $22.75
Truex has had a fast car pretty much every race this year. I was slow to get on the bandwagon, taking time to trust single-car Furniture Row Racing but now, it’s almost a necessity. Hopefully, I wasn’t too late and can still ride Truex while his price increases and he continues to perform well. The veteran has used the same car the last three races but is bringing an all new chassis to Pocono this week. The car seemed fast in practice and that transferred over to qualifying, as the No. 78 Chevy will start third. Having led well over 350 laps the last three weeks, it’s hard to bet against him getting to the front of the pack this Sunday.

No. 41 Kurt Busch $22.50
Kurt put it on the pole this week and continues to show the speed he and the No. 41 team from SHR have discovered. Miles may have reached out and grabbed Kurt at the end of the race last week, but that was bound to happen for at least one person on any fantasy team at Dover. Let’s hope that this week he comes back with a vengeance; so far, so good with qualifying dealing the No. 41 team a top starting spot. I think Busch starting on the pole at any race can be a dangerous thing for the competition, so keep him on your roster.

No. 19 Carl Edwards
The JGR teams have been fast the last few weeks, and Pocono is no exception: all were solidly within the top 15 during Friday’s first practice before qualifying. Edwards is still value priced and fits nicely onto your roster here at Pocono. The No. 19 team was fast in practice, qualified second for the race and is still riding momentum from May’s Charlotte triumph. I think that the JGR guys are going to continue to improve as the weeks go on and Carl might just be another buy and hold option.

No. 26 Jeb Burton $5.25
Jeb starts 40th this week and wasn’t ridiculously slow. That’s about all you can ask for with a back-of-the-pack pick. The BK Racing team was also brimming with confidence after Burton survived Dover’s carnage last week; a 30th-place performance was his second best of the year. Hopefully, some people fall out this weekend, victimized by Pocono’s Tunnel Turn issues and he moves up the board.

Race Winner: Kurt Busch
I think Busch is going to go wire-to-wire this week. It’s a man on a mission, paired with clean air and the raw speed SHR and partner Hendrick Motorsports keep pumping out.

Manufacturer: Chevrolet
Going with the No. 41 means you have to go with the Bow Tie Brigade.