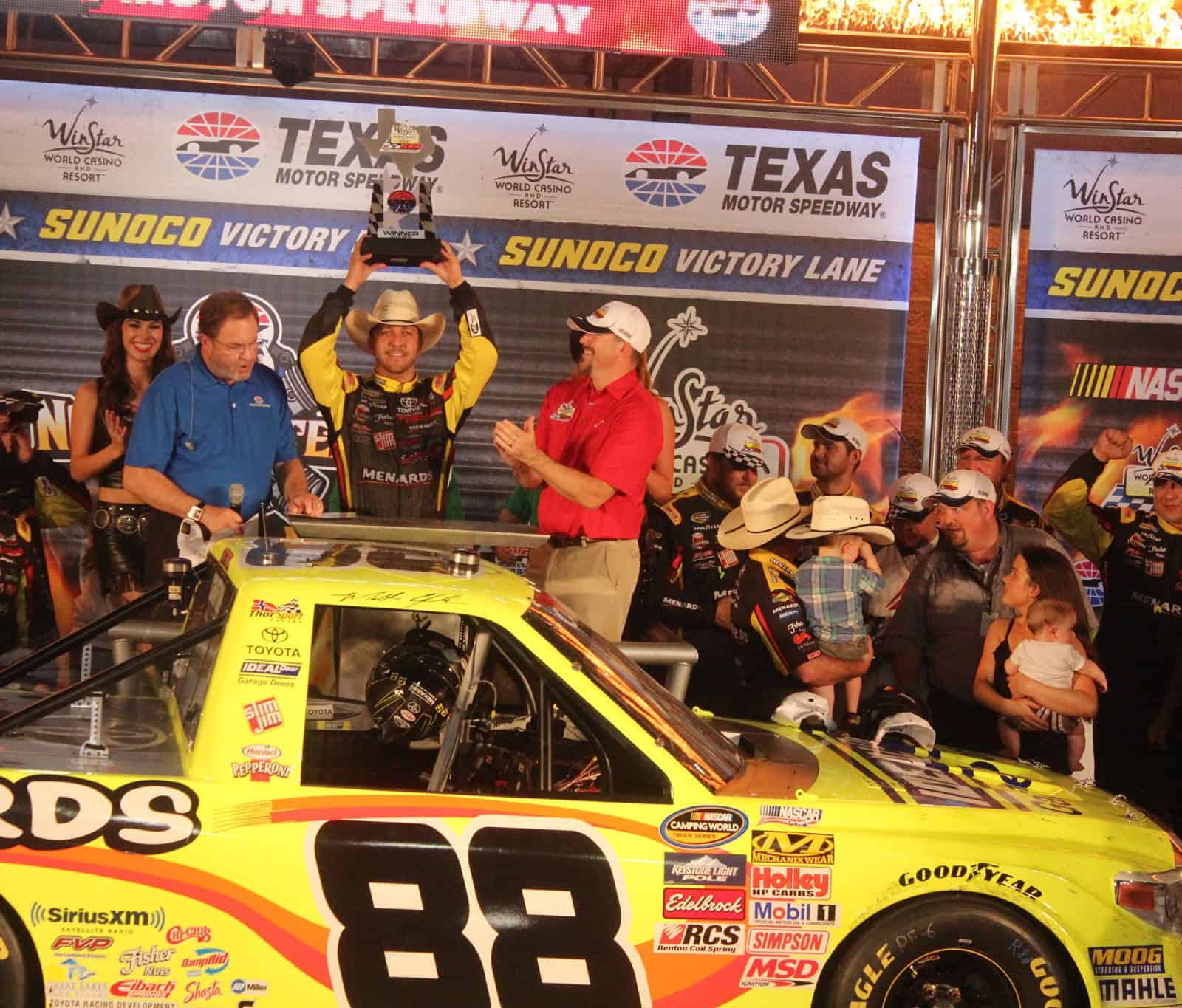 In a Nutshell: Matt Crafton scored his third victory in seven races this season with a convincing half-second win over Daniel Suarez in Friday night’s WinStar World Casino & Resort 400. The driver of the No. 88 Menards Toyota held off a late-race side-by-side challenge from Suarez and led a race-high 77 laps en route to Victory Lane. John Wes Townley, Johnny Sauter and rookie Austin Theriault rounded out the top five.

Who Should Have Won: It was really a toss up between Crafton and Erik Jones as the drivers to beat. The duo started on the front row and combined to lead 112 of the first 118 laps before trouble hit Jones in the form of battery problems. That left Crafton with very little challenge at the front of the field and smooth sailing to a solid victory, one that likely would have been hard fought in the closing laps if Jones had remained in contention for the win.

After an initial entry list of just 27 trucks for 32 starting spots, the field for Friday night’s WinStar World Casino 400 featured just 30 drivers, and eight were out of the race before the 50-lap mark. Of those eight, five were start-and-park efforts. Donnie Neuenberger, who completed just eight laps suffered suspension issues that were found shortly after the start of the race, while Jordan Anderson and Timmy Hill each succumbed to engine problems.

In the garage a little sooner than planned. Running top 20 when we lost a cylinder, and then the whole motor next lap pic.twitter.com/0Ij9lyj9NF

Motor let go early tonight. Not what we needed. Hope to have better luck next week in Gateway. @NASCAR_Trucks

In each of the last four races, Jones has led at least 50 laps before something derailed what appeared to be setting up for a dominant victory. At Kansas, it was a dry fuel tank; in Charlotte, he was edged by Kasey Kahne at the line. Last week at Dover, Tyler Reddick‘s four tires beat out the two-tire call for Jones.

Fast forward to Texas and Jones started on the pole and appeared he was on his way to a dominant victory, leading 68 of the first 118 laps before voltage issues popped up. A handful of circuits shy of the 100-lap mark, Jones was forced to make a pit stop for a battery change under caution, and a miscue on pit road left him a lap down. With his speed, Jones easily put himself in the free pass position before he was forced to make stop again for another battery, this time going three laps down.

But despite another battery change, Jones’s electrical issues remained. With 10 laps remaining, Jones complained that the motor was starting to miss and that his gauges were no longer functioning properly. The caution flag few and he was able to make another trip down pit road, however the damage had already been done. Jones ended up racing to the finish but was credited with a 15th-place result, two laps down.

If it weren’t for bad luck, Jones would have no luck at all, but the 19-year-old has nothing to worry about in the long run. It’s clear his No. 4 Toyota has the speed to compete and dominate, but the results at the end of the race don’t show the strength. With that said, Jones

Dover race winner Reddick came into Texas Motor Speedway with high hopes of another solid finish, and in round one of qualifying, it looked like he was well on his way. But his speed dropped off significantly in the second round, leaving him to start 16th.

When the race began, Reddick methodically worked his way to the top five and remained there for much of the night. But a pit road penalty for driving through four pit stalls on exit left the driver of the No. 19 Ford with a pass-through to serve under green, something that would have all but ended his chances at a trip to Victory Lane.

Just as Reddick was pulling down pit road to serve that penalty, Spencer Gallagher spun, keeping Reddick’s hopes alive. However, he once again ran into problems on pit road, getting popped for speeding. And if that wasn’t enough, the No. 19 Ford stalled at the exit of pit road late in the going. He ended up 11th, one lap down.

“Our Bulldog Ford F-150 was really good.  A lot of things happened tonight that shouldn’t have happened so I’ve got to work on that,” Reddick said. “I don’t normally think about how many boxes I exit on because it’s just second nature. The other time I was leaving pit road and I was more focused on Timothy Peters on my outside than my speed and I sped in the last segment. It was another learning experience but it’s disappointing.”

Thanks to the trouble Jones had, Reddick didn’t lose any ground to one of his closest championship competitors despite his struggles Friday night. Meanwhile, race winner Crafton continues to distance himself, taking advantage of any miscues the duo has. The most important thing for Reddick to take out of his 11th-place finish are the lessons learned about pit road mistakes. After all, if he expects to beat the rest of the field, Reddick needs to learn to not beat himself.

Fresh off of a career-best fourth-place finish at Dover International Speedway last weekend, Daniel Hemric followed up with a strong run at Texas. He started ninth and remained comfortably inside the top 10 for much of the night, well on his way to a second consecutive top-five finish. But with just a handful of laps remaining, his left-rear tire went flat, causing the No. 14 Chevrolet to bobble and eventually spin, bringing out the final caution and setting the field up for a green-white-checkered finish. He ended up ninth, still a solid day for any driver, much less a rookie.

“That wasn’t the way we wanted the race to end, but all in all, today was the best we’ve run all year. My NTS Motorsports team built me a truck that was really fast; I was able to get good restarts and do a lot of passing,” Hemric said. “If we hadn’t had that tire go down at the end, I have no doubt that we’d be looking at a second- or third-place finish, possibly even a win, depending on how it all played out.

“I’m just really proud of our guys; we had a really fast California Clean Power Chevy and I know we can build on this finish. We qualified well and continued to get better and better during the race, and we continue to have really great pit stops. At the end, we just got a lot more travel in the rear than we had all race and got a left-rear fender rub. It’s not really something you can predict; everyone is going as hard as they can at the end. The air pressure came up and I thought we were going to be fine, but the left-rear tire hit the body and cut it down down. Overall, I’m really happy with the direction that this program is going and I’m looking forward to going to Gateway [Motorsports Park] next week.”

Despite the finishing position not reflecting how well he ran in the race, it’s clear that Hemric is well on his way to making himself at home in a truck. While Jones may be the rookie that’s stealing all of the headlines, it’s Hemric who might be stealing a win in the very near future.

Rookie of the Race: Hayley, finished seventh
Note: Only drivers declared for the Rookie of the Year battle are eligible for the award.

Hayley moved up one position on the strength of a seventh-place finish, and fellow rookie Hemric jumped two spots to seventh. Gallagher remains eighth, while Peters dropped three positions to ninth following an engine failure late in the race. Rookie Boston moved up one spot and rounds out the top 10.

“I had a blast racing with Daniel [Suarez] there at the end. We were literally running the center of the racetrack and up against the wall in turns 3 and 4, and you really have to work the throttle, and drive the thing. We’re happy for sure – we’re definitely not satisfied. We’ll be satisfied when we get to Homestead and we see where we are there. I can’t thank these guys enough. This Menards Toyota Tundra was very, very good. We were a little off and that second to last run we got really loose for whatever reason and Junior (crew chief) made a couple adjustments on that pit stop and tuned it right up for me again.” – Matt Crafton

There was one point – not the last one (restart) – I really think I had a shot [at Crafton] because we had on new tires. Maybe all of us had new tires and I was able to be a little more aggressive. I knew the second restart, I really tried for one lap (to take the lead) and I was so loose to the right side of my truck. The last thing I wanted to do was wreck that fast truck. I like to bring complete trucks back to the shop. I’m not sure if I could do something different there. I need to see what Matt did, what I did, what I could do better, what I could do faster. Like I said, I do my homework and try to be better for the next time.” – Daniel Suarez

“The last caution was the break we really needed. Before we had a bad set of tires and fell off quite a bit. Didn’t quite have it for Crafton, so congratulations to him. It is nice to get a career-best and definitely be showing progress. We’re getting better and better and I’ve got to thank Zaxby’s and Hendrick horsepower.” – John Wes Townley, finished third

Up Next: The Camping World Truck Series heads to Gateway Motorsports Park next Saturday night. Last season, Darrell Wallace Jr. led a race-high 85 of 160 laps en route to a 0.329-second victory over German Quiroga. Coverage of the Drivin’ for Linemen 200 begins at 8:30 p.m. ET on FOX Sports 1; the race can also be heard on your local MRN affiliate.

Not just a short field, there were only about 20 trucks on the track by lap 30. I didn’t last much longer than that as Michael Waltrip chased me away a few laps later. Anyone know how many trucks were on track by the halfway point. As usual there was no one in the stands. But everything is fine folks. Nothing to see here. Move along please.