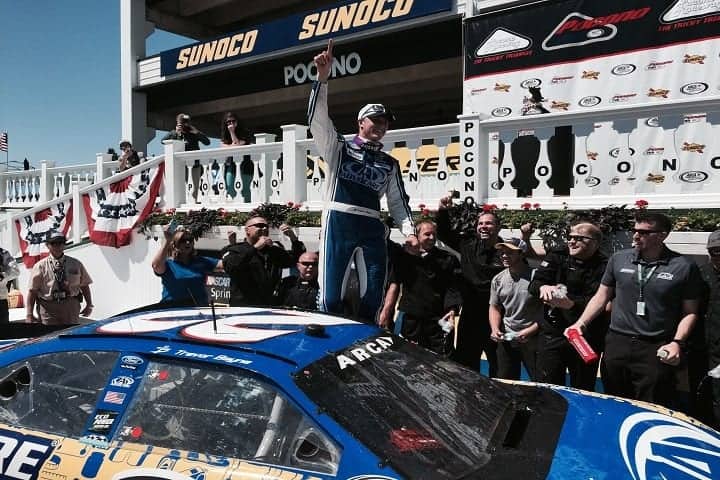 Desperate times call for desperate measures. That has been the story of Trevor Bayne thus far in the NASCAR Sprint Cup Series.

The 2011 Daytona 500 champion, in his first full-time season sits 31st in the championship standings entering Pocono Raceway. With a best finish of 18th (twice, Martinsville and Texas) Bayne has underperformed compared to Roush Fenway Racing teammates Greg Biffle and Ricky Stenhouse Jr. Driving a No. 6 Mark Martin made famous, Bayne is scrapping and clawing to simply finish on the lead lap.

“On the Cup side, it is up to Bob Osborne and I to figure it out,” Bayne said. “We are three-and-a-half months into it, and other guys have been working with their crew chiefs for five to 10 years. We are trying to play catch-up a little bit. Our cars have a ways to go in terms of getting speed. It’s too tight this weekend, and we really need to get it turning better.”

That season-long slump, highlighted by those Pocono problems made Saturday’s ARCA victory so much sweeter. In an effort to improve his results in the Cup Series, Bayne ran the ARCA event for Cunningham Motorsports at Pocono. Going to a backup car after Kyle Weatherman wrecked during a midweek test, the 24-year-old had his work cut out for him at the 2.5-mile track.

Adding the challenge of running the old-style Cup Series bodies in ARCA, along with not shifting at the three-corner track, Bayne still went on to overcome adversity, dominating the 200-mile race. Leading more than half of the 80-lap distance, he cruised to victory over Grant Enfinger, coming through in a “must-win” moment considering he was the only driver in the field with Cup experience.

“I felt like the car would do pretty much anything I wanted it to,” he said. “It’s not often you get a car like that. It was a great day for us and a lot of fun to be back in Victory Lane. I came to be better for [Cup], but we’ll take a trophy home with us along the way.”

The victory could be the start of what Bayne feels is a confidence boost. While RFR has struggled in the Cup Series, putting the “rookie” squarely on the hot seat he sees light at the end of the tunnel sooner rather than later.

“Every week, we are a little bit off and we are gaining on it for sure,” he explained. “I feel like we have gained a ton since the beginning of the season. The results haven’t reflected that since things have happened on the track. I think our speed is getting there. Greg Biffle is making a lot of progress over the last couple of weeks. Once Bob and I figure each other out, we will be good to go.”