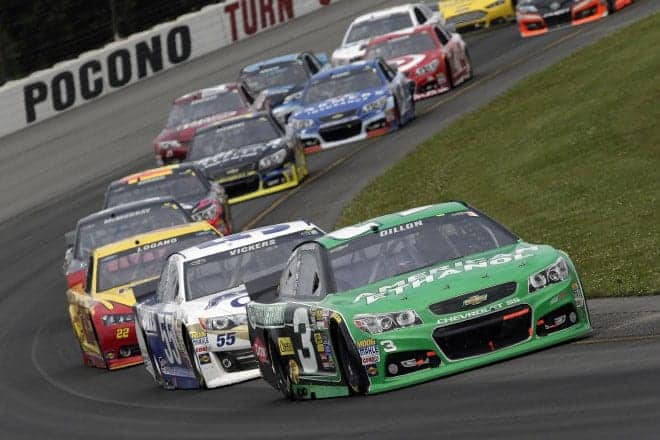 The Northeastern portion of America suffered through a horrendous winter. Pocono Raceway, smack in the middle of it all got its fair share of record cold and snow. Frost, hanging around for months forced bumps and cracks on to the surface of one of motorsports’ toughest challenges: the Tunnel Turn.

It’s a rough patch of road that’s led to a tricky weekend for many teams. Peaking with Tony Stewart‘s spinout Friday, concern is rising for what is seemingly an addition of character to the 2.5-mile track. Multiple critics, including Team Penske’s Joey Logano spoke to the media and voiced concern for getting through a 400-mile race without tearing up race cars.

“Apparently, winter was really harsh here or something,” Logano said. “It’s unbelievable. I figure Travis Pastrana would be really good here with the jump in the tunnel turn. It’s brutal. It’s a big, big jump. The front tires are completely off the race track, so obviously that’s hard inside the race car to figure out how to get over that. But for the team, if you try to fix that you hurt the rest of the racetrack.”

Speculation has run wild about what’s caused the issue, with some calling the “rough winter” theory an easy excuse. A rumor even spread a new fountain by the entrance to the tunnel, constructed for aesthetic purposes actually caused damage to the asphalt.

“For some reason, the top side of the entryway was compromised,” Kurt Busch said after winning the pole for Sunday’s Cup race. “There are literally speed bumps the size you would put in grocery store parking lots up on top of the track. Where did they come from? They had to come from the underside, where they were creating a beautiful, fancy entryway.”

However, Brandon Igdalsky, CEO and President of Pocono Raceway, quickly shot down that idea.

“If you go on the roads here in Pennsylvania, you know the winter was pretty harsh on all of the roads,” he said Saturday morning. “It affected turn 2 as well. It has nothing to do with that [the fountain]. Where that is, there is not a lot of soil anyway because the tunnel is below it.”

Whatever the reason, Igdalsky has hatched a plan to grind the track down before stock car racing returns to Pocono Raceway the weekend of July 31 – Aug. 2. Along with the NASCAR event, there is also a Verizon IndyCar Series contest upcoming at Pocono on the weekend of Aug. 23.

“We had one of the worst winters. The frost-line here was deeper than some our guys that have been here for 45 years have seen it. It’s all because it was so cold this winter,” Igdalsky explained. “We’ll get to work on Monday with our engineers, come back in August and have something out here.”

In the short-term, though the drivers are stuck fighting through what’s already Pocono’s most difficult turn. The main problem is with the current aero package, the Cup Series cars hit the ground with the front end, creating a bouncy splitter problem that has been seen at other tracks in the past – such as Fontana on the backstretch.

“It’s not gonna promote much two-wide racing through the tunnel, but it might off the corner because cars can make a mistake and you go up the racetrack, lose momentum, and a car can pass someone that way,” Logano said. “But two–wide through there, there’s a good chance someone loses the nose and gets up into somebody. It makes it exciting to watch for sure, but it’s definitely gonna be harder for cars to hold the bottom. Especially on new tires with low air pressure, you’re on the splitter more, so all of that is kind of going against you on a restart.”

“The sooner you get over it,” added Busch, “The better you are going to be. The problem is when you adjust too much for the bumps, then it upsets the car for its balance for the other corners.”