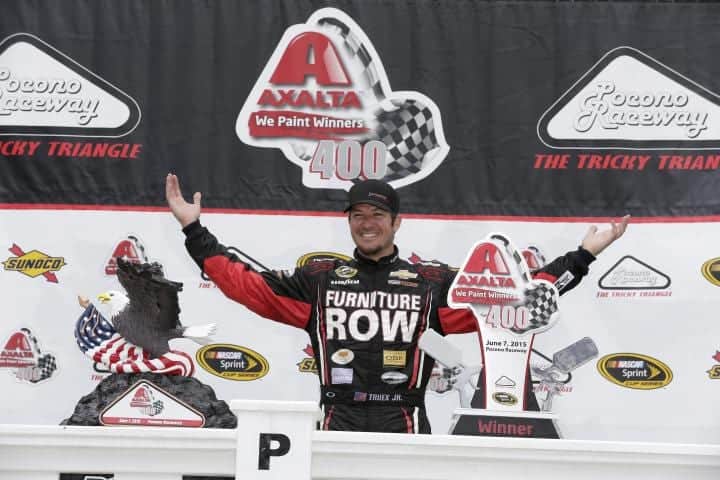 Finally. It has been a while, almost two years in fact since Martin Truex Jr. won a race. In between that last one, at Sonoma in June 2013 and Sunday’s trip to Victory Lane at Pocono life has been filled with tough moments – both for he and his family.

After being forced out of the Chase by NASCAR for something he didn’t do (Spingate) Truex was left searching for a ride. He landed at Furniture Row Racing, a decent team yet struggled in his first season with an average finish below 20th. Accompanying his 2014 struggles on track, Truex has been attending to his longtime girlfriend, Sherry Pollex, who was diagnosed with ovarian cancer in Aug. 2014. The two have a more important battle off the track, but success at their second home, with all they have been through, is something that brings life to their relationship.

“It means a lot, it really does, because there’s going to come a time when racing and where you finish in races doesn’t matter,” he said about the support received. “What’s going to matter is kind of the legacy you leave and how people look at the person that you are. So that means a ton to me to have that respect, and honestly, it’s kind of humbling.”

It’s a series of difficulties, the positive way both have tackled their problems that was noticed throughout the NASCAR garage area. Among those congratulating Truex after his win included Jimmie Johnson, Dale Earnhardt Jr. and runner-up finisher Kevin Harvick.

Despite the hardships, 2015 has been refreshing for Truex, culminating in Pocono’s winning performance. Former lead engineer Cole Pearn replaced Todd Berrier as his crew chief this season, sparking a turnaround that’s left them a shocking second in the standings. With 13 top-10 finishes in 14 races, Truex has more than doubled last year’s output with more than half the season left to go. He’s on track to set career highs in laps led, top-five finishes and even his average start.

Running up front is one thing; closing the deal is another. Following a streak of three dominant races while utilizing the same car, Truex finally earned his first victory, taking the Axalta “We Paint Winners 400” over Harvick. With the support of Pollex, the 34-year-old has finally overcome adversity to lock the Denver, Colo.-based team into the Chase.

“You know, I did believe in her, but I just knew it was going to take a lot of work,” Truex said. “I knew it was going to be a tough road to get back. I felt at the time ‑ I felt lucky. At the end of the that season, I felt really fortunate that there was a great ride open with the No. 78. They were just coming off their best year ever, and went into last year honestly feeling like, okay, this is going to be good. This might take a little time to get things figured out, but it’s going to be good and we’re going to pick up kind of where I left off, and it was just the complete opposite. It was just miserable. Nothing went our way, nothing ‑ we had no speed. We couldn’t make the cars work; they felt terrible to me. They were so inconsistent, you just never knew what you were going to get.”

The turnaround from that point, a season in which Truex led just one lap has been simply remarkable – especially when considering his overall resume. Winning at Pocono marks a third career Cup triumph, the first since 2013 at Sonoma. The revived organization has been second-best most of the season, trailing only Harvick and seems poised to be a serious title contender.

Now, instead of having to rely on points to make the Chase, his team can breathe. Known as the best single-car outfit, they’ve proven to be just as competitive as teams with twice the funding.

“Right now, they’re as good as anyone out there,” the driver said of his FRR organization. “I mean, look what we’ve done the last four weeks. We went head‑to‑head with the big guys, the Nos. 48 and the 4, who have been the guys to beat for a year and a half. The No. 48 has been the guy to beat for seven, eight years. We’ve been right there with them, toe‑to‑toe.”

While edging out the championship favorites, the No. 78 team has continued to grow, especially concerning its alliance with Richard Childress Racing. Prior to Pocono, the No. 78 team prepared a fresh car, a more updated one with new specs that the previous one from Kansas, Charlotte and Dover did not have. The move paid off for them, and because of it, Truex is in the best position of his career. The potential is there to ride on cloud nine for the remainder of the year, especially if the on-track success continues to pile in. Winning a race is just one small step of making it into NASCAR’s Final Four.

As the season rolls on, Truex has momentum on his side, consistency paired with confidence. He has led the most laps in every race dating back to Kansas, and with a new car being sent to Michigan, the team believes that victories will start to come a lot more frequently.

“There’s still mountains to climb and things to conquer. We haven’t won a championship,” he cautioned. “This is one race. We’ve got a lot of work to do yet.”

That maybe true. But so far, plenty has been accomplished by the underdog-turned-contending driver and team.

MTJ has been in Cup for over a decade…3 wins in 12 years isn’t much to hang a hat on. He has had two of the longest winless streaks in CUP, twice in that time period. The “popular” win is because of what happened with MWR, not so much for his driving prowess or “bad luck”, that one could feel sorry for him…although so far very good this year. People can’t stand Michael Waltrip and view this win as a big middle finger in his face, whatever.
Reminds me of Kurt’s win a short time ago..most could care less it was Kurt other than they thought it was a big middle finger to BZF. SMH. IMO, of course…:) :)

I find it interesting that Furniture Row Racing is doing so well with one car with the RCR alliance while RCR itself hasn’t come close to wining a race this season. Austin Dillon and Paul Menard have the pedigrees and the sponsorship dollars that come with all that, but they aren’t really making their mark on the sport, at least not yet. And Ryan Newman hasn’t won a race since he joined the organization. As it stands, RCR is the Roush Fenway of the bowtie teams.