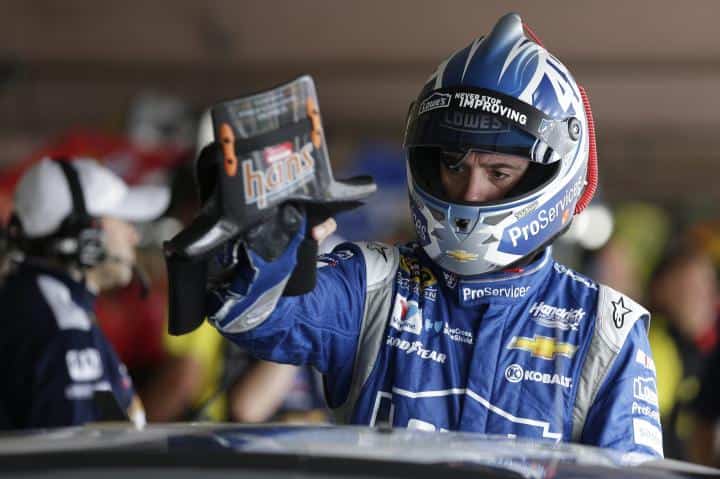 Jimmie Johnson‘s appeal for a P1 penalty assessed at the end of May has been rescinded. A National Motorsports Appeals Panel handed down their decision Tuesday after both sides, Johnson and NASCAR presented their case surrounding warnings the No. 48 team had been assessed in back-to-back weeks. Those warnings, penned by NASCAR officials concerned a May 16 penalty in the All-Star Race for illegally pulling out a side skirt followed by difficulties passing pre-qualifying inspection the following week.

Since the No. 48 team gotten more than one warning back-to-back, NASCAR penalized the team after the Coca-Cola 600 by putting them at the end of the pit stall selection process at Dover. The team appealed the P1 penalty that week, giving them the ability to choose their stall instead until the appeal was heard Tuesday. The end result may have helped Johnson to win the Dover race, his 10th career victory at the facility.

While hearing the penalty, the National Motorsports Appeals Panel concluded the warnings themselves were not appealable, justifying NASCAR’s actions to issue a P1 penalty. However, the panel went a step further to discuss whether the rules themselves had actually been violated to the point a warning should be issued in the first place (Section 14.15.1.b). In that case, they decided the second set of consequences, a warning after pre-qualifying inspection at Charlotte was not fully proven by NASCAR. Citing “conflicting evidence,” the three-member panel claimed a warning should not have been issued, rescinding the violation and therefore the penalty (only one warning exists now instead of two).

Richard Gore, David Hall and Jay Signore made up the NASCAR appeals panel for this case. Gore is the owner of Old Dominion Raceway, a 3/8-mile oval near Manassas, Va. Hall is the former president of Gaylord Communications Group, a company who once ran former NASCAR television partner The Nashville Network. Finally, Signore is the former president of the defunct International Race of Champions.

There has been no word on whether NASCAR will now issue separate penalties for the No. 48 team after Pocono, a separate incident where it took four times for the car to make it through pre-race inspection, an issue crew chief Chad Knaus claimed on FOX Sports 1’s Race Hub was the result of “making the most out of every advantage we can.” As an addendum, the P1 section in the sanctioning body deterrence system has numerous options. These include last choice of pit selection, track time deductions in practice, track time deductions in qualifying, a delay in order of inspection, being selected for post-race inspection, forcing a vehicle to stay inside a hauler until the beginning of the day or event, temporary suspension of an annual hard card, reduction or suspensions of other event privileges or community service.

It is always a “grey” area for HMS in particular, Chadley. The mere mortals in the same situation wear the scarlett “C” on their fire suits and their bank accounts are always lighter, and probation is activated. BZF, I am sure is hustling up a big “I’m sorry” package to send to HMS HQ.

Who’s surprised by this announcement?

Not surprised at all. Another Hendrick penalty swept under the rug.

Does there ALWAYS have to be that whiff of fix?

Geez, can it be any more transparent that NASCAR is in bed with HMS?

dupont teflon at work again…..penalties and infractions just slide off.

hendrick’s payola check must have cleared in time.

Rick Hendrick’s pockets have got to run dry one of these days.

This gives me one more reason not to watch nascar. When crap like this happens it usuall y signals the end. Rules selectivly enforced. Just more stupidity, kind of reminds one of our government.

At 71 years old, this old gal can say this decision is bullshit.

And NASCAR wonders what is wrong with the sport. There is too much bias in the organization, which gets paid off by Chevrolet and Hendrick. They only penalize the smaller teams with the lesser known drivers. I think even Bill France, Jr. was better at running this organization.