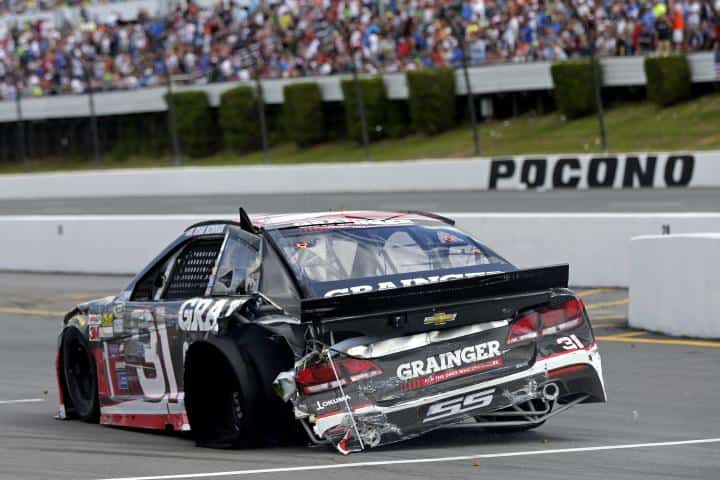 What a popular victory that was on Sunday at Pocono Raceway for Martin Truex Jr. I know that I am meant to be scrupulously impartial – and for the most part I am, honest – but there was something about that win that really warmed the cockles of my heart and maybe, just maybe I clapped a little when the No. 78 Furniture Row Racing Chevy took the checkered flag. Truex has been through so much both professionally and personally with his girlfriend’s cancer diagnosis, so to see him finally break through after being so close so often this season was, simply put, fantastic and it was a feeling shared by many up and down pit road.

The real question now, though is how far can he go this year? Second in points behind Kevin Harvick, Truex has a very real shot at a championship if he can keep running like he has been. It feels, truth be told, almost remarkable to type that but the truth is on current form he is absolutely in the mix. For me, that’s the key now after watching the No. 78 move to the front. Truex needs to parlay this speed into a deep run for a championship and he has the time over the next 12 races or so to really get ready. Rookie crew chief Cole Pearn, who was promoted from the lead engineer role in the offseason (replacing Todd Berrier) has had a charmed life so far. What he does from here on in will certainly be interesting to watch. It’s a partnership, you suspect, from which there is much more to come.

Sitting pretty atop the Sprint Cup standings is reigning champion Harvick, who has picked up this season just where he left off in 2014. Sunday’s second-place effort was, incredibly his eighth “first loser” finish in 14 races: a stunning, metronomic run of form however you slice it. When you add in his back-to-back wins at Las Vegas Motor Speedway and Phoenix International Raceway plus three other top-10 runs, giving him 13 on the year it’s even more impressive. The only blot to Harvick’s copybook was a 38th-place finish at Bristol Motor Speedway when he was caught up in an incident not of his own making.

There is precedent for this fast start, as you might expect, but you have to go all the way back to Bobby Allison in 1972 to find the last driver to have a similarly strong start to the season. Allison, for the record, finished runner-up that year to King Richard Petty despite recording 10 wins and 25 top-five finishes in 31 races. Second place can become a habit, it seems. Jimmie Johnson may have more wins (four total) in 2015, but you get the sense that Harvick is the driver the wheelmen of Cup will have to best to pick up the wavy silver trophy at Homestead-Miami Speedway.

There has been much talk, multiple column inches and many, many tweets (not to mention an interview funny from Johnson) on the subject of the driver council these past couple weeks. It is, to be fair, an interesting topic and very worthy of discussion. In public comments this past weekend, NASCAR CEO Brian France noted: “I’ve said from the beginning that we’re going to improve our communications across the board with all the stakeholders, and they’re certainly as important as anybody. So that’s consistent. What you’re seeing is just more formalized conversations.”

Those formalized conversations are, in my opinion, much welcomed because the drivers know better than anyone how this rules package works on any given Sunday. In the past, this sort of thing might be seen as almost a threat to the governing body’s hegemony but in this day and age of always on social media it seems like the right thing to do. At the end of the day, drivers will have their own self-interest but as a group the overriding theme will be to see the sport improve. Given the issues with aero push and clean air domination this year, anything the drivers can suggest to change the quality of competition can only help. I look forward with great interest to see how this driver council develops. Watch this story, folks; it’s not going away.

FOUR: Michigan Up Next

After the first of two races at Pocono Raceway this past weekend, we’re off to Michigan International Speedway for, yes you guessed it, the first of two 2015 races. Sunday will be Cup race number 91 at the D-shaped, high-speed, moderately-banked oval, a streak that goes all the way back to June 1969 – a race won by the one and only Cale Yarborough. The two 2014 Michigan races were won by Johnson and Jeff Gordon, and those two famous names will very likely be in the mix this weekend. Another driver itching to make it to Victory Lane will be Greg Biffle, who has four victories at the track (the most among active drivers). That’s appropriate considering Ford leads in all-time manufacturer wins with 34; Chevrolet is a distant second with 22. It will also be a double duty weekend for Kyle Busch, who runs in both the Xfinity and Sprint Cup series races – his first time back in a second series ride since the injuries he sustained at Daytona back in February.

Michigan is one of the fastest, if not the fastest tracks in NASCAR so it will be interesting to see how much passing occurs. Unfortunately, I suspect it’ll be more of the same of what we’ve seen this year so far. This one could be a snoozer….

BEARDEN: Busch Is Back In The NASCAR Xfinity Series

Finally this week, a quick word on Ryan Newman, who tangled with AJ Allmendinger at Pocono Raceway this weekend, much to the veteran’s chagrin. The wreck ended Newman’s day when he looked set for a solid top-10 finish. But what I really liked was Newman’s caustic response in an interview with Motor Racing Network when asked what went wrong. “It’s pretty obvious what happened,” said Newman. “The [No.] 47 [AJ Allmendinger] just ran out of talent. He has got one coming now.” In this age of politically correct responses and sponsor-friendly statements, it’s great to see a driver call it like he sees it. You wouldn’t expect any less of Newman, and it will be interesting to see if he does end up taking revenge in the coming weeks — especially considering the alliance Richard Childress Racing, Newman’s employer has with Allmendinger and JTG Daugherty.

I see the Newman “incident” differently. He is one of those guys who is a card carrying member of the “do as I say, don’t do as I do club”, with Kevin Harvick clearly the President, Newman the Vice President and Tony Stewart the Sargent at Arms. I think for a man who got into that absurd “Chase” last year by punting Larson, he should learn to eat a little humble pie and shutup. His comments at this time, are not entertaining or wisdom orientated. Given the freshness of the fact that he ALMOST won a Championship with NO WINS, and just 41 laps lead for 35 races, he needs to lay low with the big mouth, orge stuff, for the time being. IMO. Go AJ!

Not getting the anti-Newman comments. He’s driving RCR equipment that really is no longer top tier. It’s rare you see a RCR car leading laps or looking like a contender for a win. That said, Newman has done a masterful job of getting what he can out of the cars and staying out of trouble. Sure he punted Larson and under the circumstances it would be difficult to name a driver that wouldn’t have done the same thing. Sure don’t understand the comparison to Tony Stewart’s constant complaining. Hell, normally a reporter can’t get more than two sentences out of him whether he had a good or bad day. I do agree he was tough on ‘The Dinger,’ (though he clearly screwed-up) but perhaps there is a history there we are not aware of. Were it not for the 50-point penalty Newman would again this year be solidly in the top-10 in points and almost a cinch for the Chase. The guy is a solid racer that pretty much keeps his mouth shut.

Thanks, kb. You saved me the trouble. I see it exactly the same as you do.