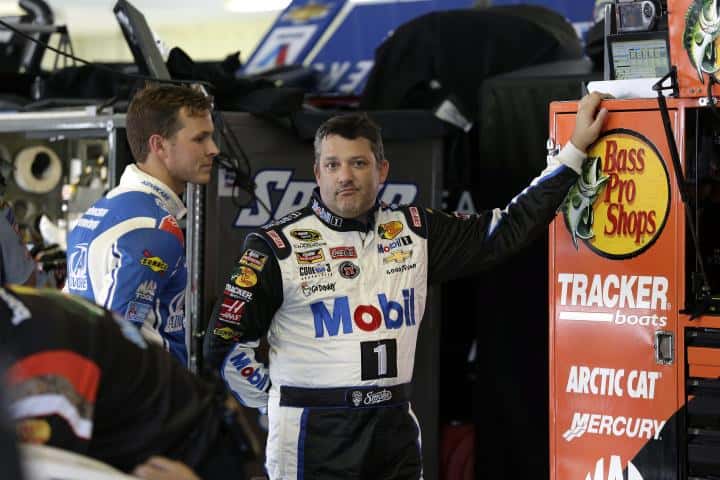 Martin Truex Jr.‘s win this past weekend at Pocono Raceway has been declared by many inside the sport as one of the most popular victories in the garage area. In fact, one popular member of the media even compared the overall outpouring of support by the entire Cup garage for the Truex victory on Sunday to the only Sprint Cup win for the late Dale Earnhardt at Daytona back in 1998. There’s no question that, given everything Truex has endured both on and off the racetrack, starting with the way he was dismissed from Michael Waltrip Racing back in 2013 to most recently, the battle with cancer that his girlfriend, Sherry Pollex has gone through, Truex deserved this win, period.

His No. 78 Furniture Row Chevrolet, a single-car operation owned by the Denver, Colo.-based furniture magnate, Barney Visser, with support from Richard Childress Racing, has been one of the fastest cars off the hauler each weekend thus far this season. We’ll see if Truex, currently third in the Sprint Cup points standings, can produce another victory before the series heads to Chicagoland this fall.

Now onto the penalty saga with Jimmie Johnson If you’ve been following the developments in this ongoing story, on Tuesday the P1 penalty was rescinded by the National Motorsports Appeal Panel, due to the absence of information on one of the warnings that was given after the No. 48 car failed inspection. The first penalty that was due to a side skirt violation at the All-Star Race in Charlotte was upheld. It seems like Johnson and crew chief Chad Knaus have dodged the bullet of penalties being handed down from NASCAR. They felt as if they were wronged by the penalty, not at fault, and rightfully went to NASCAR and won their case. However, the No. 48 Chevy did fail pre-race tech inspection three times before Sunday’s Axalta 400 at Pocono, which could result in another penalty.

Remember, six warnings in inspection in a six-month period does warrant a P2 penalty to any Sprint Cup team in violation. So the penalty saga continues for the No. 48 bunch over at Hendrick Motorsports. Oh, by the way, Johnson finished third in Sunday’s race at Pocono, and is currently first place in the Sprint Cup points standings with four victories on the season.

Now onto this week’s Mailbox questions from you our readers…

Q: Greg, It seems like there are a ton of races coming up on the Cup schedule that don’t have a title sponsor. How big of an impact does that have on the tracks and event, and do you think it’s an indication of what’s to come in the sport? – Barry K., Richmond, Va.

A: Hey Barry, thanks for writing in this week. If you look at the schedule there are actually a total of four events in the remainder of the 2015 Sprint Cup season that currently do not have title sponsors on board for their events – Loudon’s in July, Pocono in August, Chicagoland in September and Talladega in October. I really should have capitalized currently in that previous sentence because time is really the track promoters’ friend in these situations. A sponsor could very well come out of the woodwork for one of these events at any time, and in many cases does, sometimes just weeks before the race takes place. The front offices of these tracks are working hard right now to secure sponsorship and work out the most beneficial package possible.

As far as it being a negative sign of things to come for the sport in general, I don’t really subscribe to that way of thinking when it comes to sponsorship and marketing in NASCAR. What it comes down to is getting people in the seats at these facilities and ensuring that the sanctioning body has the best TV deal in place for the maximum exposure of the product. NASCAR has delivered on its end as far as the TV deals go with strong partners in FOX and NBC. The sanctioning body is also constantly working to further refine the rule package, which is a hot-topic all the time, on these cars, thus improving racing each week.

What is comes down to is getting innovative with how the race promoters and tracks are using sponsorship dollars and marketing, especially regionally, to get fans in the seats trackside. This issue is one of the biggest facing the sport right now- growing the fanbase with new, younger fans. The tracks are well aware and are continuing to invest in their facilities with amenities like wi-fi throughout, more room in the seats and better restrooms, concessions and video integration to help make a day at the track for today’s fan more appealing.

Sponsors will come and go, but what is really crucial is people.

Q: Hi Greg, OK so my question has to do with one of my favorite drivers, Tony Stewart. What’s up with him and that No. 14 team this year? I understand last year was just a terrible series of events and with what Tony dealt with you couldn’t expect him to really be dominating the field every week. But this year it seemed like everything was firing on all cylinders at SHR [Stewart-Haas Racing] and some of the good fortune the Nos. 4 and 41 cars had in 2014 might have transferred over to the No. 14. What’s going on? Thanks. – Fred F., Lancaster, Ohio

A: Fred, thanks for writing us! Stewart has been talked about a lot this week, especially after wrecking in practice and having to go to his backup car at Pocono on Friday. There is no real answer right now to whatever the problem is with the No. 14 car at SHR right now because no one, including Stewart and crew chief Chad Johnston, know exactly what is wrong. To be fair, I think it’s a lot of things right now. Stewart has indicated in one recent interview that it’s him, that he’s the reason for their bad runs this season, but no one outside that organization can really put a finger on exactly what the issue is.

I’ve also read and heard that there may be an issue with Stewart’s driving style and the new horsepower changes to the engine package this season. There could also be a communications issue between Stewart and now second-year crew chief, Johnston. Some have said that the three-time Sprint Cup Champion, now at age 44, has simply “forgotten how to drive a race car.”

That last one I do not, under any circumstances, believe for a second. Stewart is one of the best racecar drivers the sport has even seen, and still can be.

Why the speed and the dominance that we’ve seen basically every week this season out of his teammates Kevin Harvick and Kurt Busch in the No. 41, is one of the great mind-boggling issues inside the sport this entire season. There is no good answer anyone can give right now to the mess Stewart and the No. 14 team is in right now. We’ll just all have to wait and see.

Some boxers are brawlers and some are finesse fighters. Stewart is a brawler in a finesse car. It could be as simple as the current vehicle not suiting his style.

I agree. And a brawler in a finesse car requires more patience than Tony Stewart is known for. I also agree with Greg… no way has Stewart forgotten how to drive. I suspect that Stewart’s team will bounce back by Chase time. Whether he actualy qualifies for the chase is anyone’s guess at this point.

Don’t forget Stewart’s last championship run. With the Chase format he is right on track to win another one. He just needs to pick up the team and carry it on his back like they said he did last time. All it takes is a hot streak when your playing craps.

One good thing going for Stewart. He is capable of winning a race at anytime, and that’s all he really needs to right the ship and get in the Chase. If there were no chase, he would be toast already this season, but thanks to Brian’s ridiculous “win- and-your-in” gimmick, he still has hope until Richmond.

AS for man Smoke I think I have an idea. I compare him with Tiger Woods. Both are suffering a form of PTSD. Both Tony and Tiger suffered very public and emotionally disabling events. Yes Tiger screwed up on his own and his fault, Tony’s wasn’t. But they were both scandalized in the press. Both also had physical problems that required multiple surgeries that kept them on the side lines for long periods of times. Neither has been right since.

If Smoke can’t get it together in a couple of seasons, hope he waits retires gracefully instead of embarrassing himself like D.W. did (changing the champions provisional along the way).

Tony is my favorite driver, too, but there’s a problem there. Harvick’s car is fast, Bush’s car is fast, Danica has even shown to be fast at times, but where’s Tony? Maybe he needs a new crew chief. Johnston doesn’t deem to be getting it done for Tony.