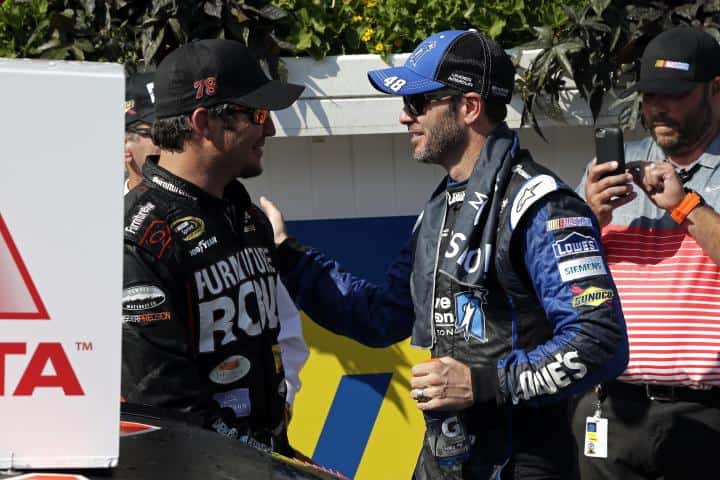 Frontstretch will scour Twitter and other social media platforms every week looking for some of the best posts from your favorite NASCAR drivers, personalities and other people around the world of stock car racing. These were some of our favorite posts and we hope you enjoy them too!

1.) Bring Buescher & Bubba to Pocono
2.) Tell them not to get out of that heart-shaped jacuzzi until they make amends pic.twitter.com/DQSmqNiw8p

During the NASCAR Xfinity Series race at Dover, Darrell Wallace Jr. and Chris Buescher, who are teammates at Roush Fenway Racing, got into one another in the closing laps. While Buescher was able to hold on to capture the win, Wallace did not get the finish he would have liked.

While NASCAR drivers weren’t on the track, Danica Patrick spent some time watching some horse racing. After the race had completed, Patrick posted this tweet on her Twitter, congratulating American Pharaoh on the Triple Crown.

Thanks for setting this up & then for lighting me up @DaleJr. What a fun afternoon for the 48/88 crews. @SkirmishUSA pic.twitter.com/GCnQBUrRQp

Jimmie Johnson, Dale Earnhardt Jr. and the rest of their team members had some fun over the weekend during some down time. The two teams went paint balling and appears they had a blast. Johnson posted this photo while holding a paintball gun looking for his next target.

Clint Bowyer is one of those drivers who still enjoys watching races at the dirt track. Over the weekend, the car of Scott Bloomquist was found to be 25 pounds too light after the race. Bowyer sent out this tweet, saying that Bloomquist lost $100,000 pretty quickly. Some people actually thought Bowyer wrecked or destroyed something worth $100,000.

Pocono in the 1930s pic.twitter.com/FgsDuVr5iT

During the Pocono weekend on Friday, many drivers talked about the bumps that developed over the winter at the Pocono Raceway in turn 2. The bumps were so bad that drivers said they would feel their cars lifting as they went through the tunnel turn. NASCAR Wonka posted this GIF, showing what it was like at Pocono back in the 1930s.

@ClintBowyer @EuroNASCAR @BrandsSpeedFest I want to hear Hoots in French

Steve O’Donnell got a little treat this past weekend to travel overseas to watch the NASCAR EURO Series compete in a race. While there, O’Donnell posted neat photos and videos of his experience working in the race control booth.

NASCARCasm had the opportunity to have a lot of fun this past weekend. Team Penske Racing drivers Joey Logano and Brad Keselowski had some fun as they will be featured in the next Sharknado. During the Axalta 400, Keselowski and Brett Moffitt got into one another. NASCARCasm posted this tweet, showing Moffitt’s car being picked up by the Sharknado as Keselowski stood watching.

Great moment! All sticky during the post race interviews right about now. pic.twitter.com/qBqknyPqMF

Close friends celebrate a win a long time coming. Do we need to say anything else?

I feel like the luckiest guy in the world right now. Never give up

Martin Truex Jr. showed everyone why they should never give up on something in life. After losing his ride due to a sponsor leaving at Michael Waltrip Racing, struggles he and his girlfriend went through with cancer, Truex is a great driver that every young kid should look up to. Truex posted this on his Twitter following the victory, telling everyone how lucky he feels.

Ty and Austin Dillon got to meet one special person Monday night. The Dillon brothers had the unique opportunity to meet Taylor Swift following one of her concerts. Let’s just say, they appear to be having a lot of fun!

That will wrap-up this week’s edition of Tweet ‘N’ Greet! Be sure to check back here next week for another edition! If you’re on Twitter and not have already, be sure to give us a follow @Frontstretch!