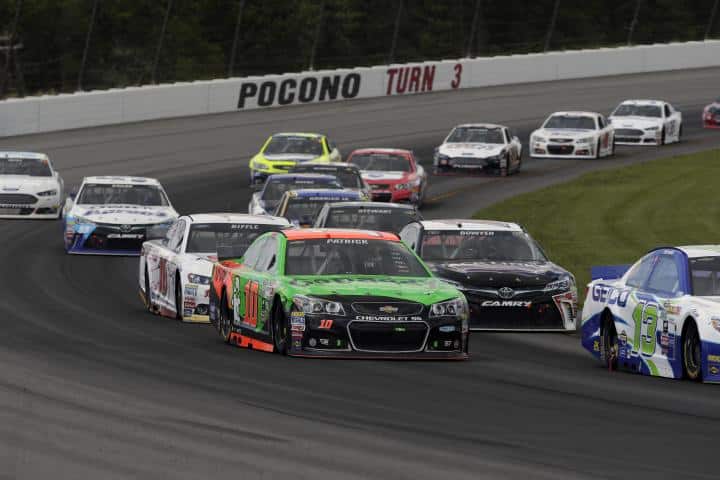 97, 131, 131, 95. Those are the numbers of laps led in each of the last four Sprint Cup points races by Martin Truex Jr. But the only number Truex needed and now has is the No. 1, as in the number of wins he has so far this season. The win by the No. 78 team was one of the more popular ones in recent memory. That’s partly because Truex and his team had flirted with victory in each of the previous three weeks, only to have something go a little awry in the final laps and leave them wondering how they didn’t win. But the fourth time was the charm for Truex and crew chief Cole Pearn who, much to his relief, figured the sometimes difficult end game in winning these races. It was also a feel good story because it is some good news for Truex and his girlfriend Sherry Pollex, who have been public about her battle with ovarian cancer. So, yes, it was good reason for much of NASCAR to celebrate this victory. And it was no fluke; Truex has been good all year (13 top-10 finishes in 14 races). Don’t expect him to fade away either after breaking through.

OK, so he didn’t win again, but you know Kevin Harvick, as always was right there in the thick of contention. Harvick was able to cut Truex’s lead in half during the final 15 laps Sunday but he couldn’t make a big enough gain to take first place. Harvick’s impressive season continued, though as he now has 10 top-five finishes, including two wins, and 13 top-10 finishes in 14 races this season. When other teams are trying to figure out how to win any race, they know Harvick will be a factor going forward.

OK, so say you were watching the race Sunday, you saw Jimmie Johnson suffer a cut tire and you just think his day is over. But Johnson recovered, stayed on the lead lap and then worked his way gradually toward the front, ending up in third place. No, he really didn’t have a chance to win this one but the fact is, the No. 48 team looked like a wounded warrior only to pull a top-five finish out of its hat. Hate them or love them, you’ve got to respect the team for what they’ve done.

It was sort of a weird day for Kurt Busch and the No. 41 Chevrolet. He ended up with a pretty respectable finish, coming home in fifth place. His car was pretty good all day. But isn’t it a bit odd when the polesitter doesn’t lead a lap in a race, which was the case with Busch in this one?

What has been impressive about Busch this season is he now sits 12th in points, getting that coveted victory that should put him in the Chase on his resume. Considering he missed the first three races that’s exceptional.

What was looking to be a good day for Danica Patrick went bad in the final laps at Pocono. Assuming the resulting finish cost her somewhere around 25 points, it may well have taken away any realistic chances she has of making the Chase. Patrick was running 11th when she rubbed tires in the middle of the pack and the contact ended up cutting her tire. The end result was a meeting with the wall in the next turn, meaning instead of at least a top-15 finish, she ended up 37th. Patrick had run decently most of the day, but if she would have finished, say 12th, she would have been 21 points behind Chase 16th-place Ryan Newman. Now, she is 46 markers behind Newman which, even with 12 more races left in the regular season, is a much tougher hill to climb.

It looked this week might be a good one for Austin Dillon. He started sixth and you would think a top-15, or even a top-10 finish, would not be out of the question for the No. 3 team. But Dillon started going backwards early in the race and was never a factor. He ended up in 19th and now sits tied for 23rd in points. You keep waiting for this team to turn the corner, but it’s more like hitting the wall than anything else.

Aric Almirola and the No. 43 team showed some promise with its first top 10 last week at Dover. But that was erased Sunday when it had to settle for a 43rd-place finish. Almirola had engine issues early on and was the only driver to complete fewer than 100 laps. It wasn’t a good day for his Richard Petty Motorsports teammate Sam Hornish Jr. either. Hornish got caught in an accident and completed just 120 of the 160 laps, finishing 41st. The good news for Almirola is that he is still in the Chase for the moment, five points ahead of Newman and 25 points ahead of 17th-place Clint Bowyer.

David Ragan is showing us that equipment can really make a difference. While Ragan wasn’t great when he was filling in for Kyle Busch in the No. 18 car, he was at least competitive. Now, since taking over for Brian Vickers in the No. 55, Ragan has rarely been seen in the top 10 and settled for a 23rd-place finish Sunday. Maybe he can help his Michael Waltrip Racing team make a breakthrough at some point this season, but I wouldn’t count on it.

Seems some teams were missing from this Chevy report….

It seems there’s a culture here at Frontstretch to call a season’s end over one race. As I eluded, you’re not the only author to do that, but your inclusion of Danica Patrick’s run and what it means, regardless of how inaccurate your thoughts are, shows a youthful exuberance for getting clicks, and thoughtless abandon for her millions of fans.