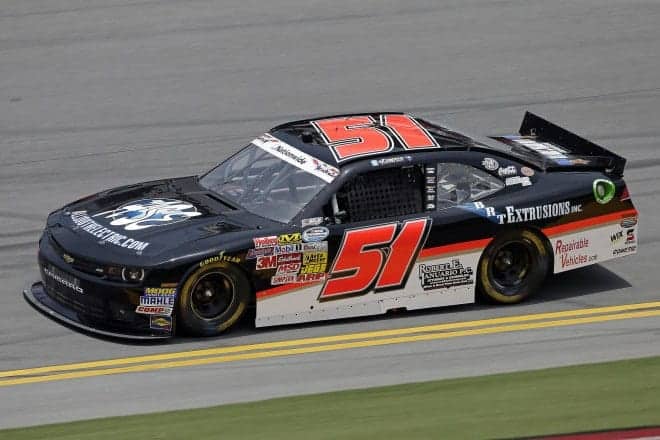 When you walk around the NASCAR Xfinity Series garage, you can’t miss it. It’s small and white, with clear vertical drapes instead of a set of doors soaked with Fortune 500 logos on it.

As you step foot into the hauler, its short track look brings back memories of what it is like at quarter-mile race tracks across the country on a Saturday evening. The atmosphere is a lot different now, however, for this one family-run team. It’s one of the few that stick to the grass roots of stock car racing in the sport’s second-tier division. But it’s the only choice they have if they want to succeed.

Jeremy Clements Racing, a small organization based in Spartanburg, S.C., has been running full-time in the Xfinity Series since 2010. The team’s owner is also the driver – Jeremy Clements. With several years of experience, Clements has led his team to become one of the few inside of the top 15 in the championship standings year-in and year-out without any Sprint Cup Series affiliations.

“I think it has been our best season yet,” Clements said. “We have had a lot of good runs and we have been the first non-Cup [affiliated] team a lot of times. I beat [Kevin] Harvick and the No. 20 [Erik Jones] at Charlotte. That’s hard to do and finish on the lead lap. We’re so out-moneyed and out-resourced that it isn’t even funny. If we can just keep it up and get us some top 10s, that would be great. I know we can do it; we’ve done it before.”

Edging out the teams with Cup Series drivers and crews is quite the achievement for this minuscule organization. With three team members that work on the cars, it has been a long journey. However, things are starting to pay off in Clements’s fifth full-time season while piloting the No. 51 car.

Limited funding prevented them from competing for top 15s on a weekly basis in the past, but that is not the case in 2015. Through 12 races, Clements sits a comfortable 11th in the standings, just behind rookie Daniel Suarez and ahead of David Starr and Dakoda Armstrong by a sizable margin.

“We are hitting on some setup stuff that we have been trying,” he said. “We finally got it to do what we need it to do. We tried stuff similar at Texas and California and it didn’t work at all. We had some people come in to buy us tires instead of running on scuffs every weekend.”

Earning his first top 10 of the year at Dover International Speedway, the 30-year-old has set his sights on making it into the top 10 in points. Fighting against teams with budgets substantially larger than his, he believes that it is possible. And why shouldn’t it be?

Whoo hooo!! Got us a top 10 at the monster mile!!!! Out ran some top big teams today! Huge accomplishment for us! Thx 4 all kind words!!!

Since Bristol in mid-April, Clements has finished each of the six races 17th or better. Think about it this way: he has outrun Daytona winner Ryan Reed in four of those races when Reed’s Roush Fenway Racing budget surpasses $5 million per season. In each of the past two races (Charlotte and Dover), he has also outran drivers such as reigning champion Chase Elliott and former Cup Series driver Elliott Sadler during the first half of both events.

But how is someone on such a small team doing the unthinkable?

Well, after years of running the Chevrolet SB2 engine, Clements’s team has finally swapped over to the R07 – an engine unveiled by Chevrolet in 2009 for what was then Nationwide Series competition. However, the change has not come easy for them, especially since it does not lease engines, unlike other small teams.

“We still don’t have the money and resources to build our own engines,” explained Clements. “It costs $50 or 60 thousand to build them. They get them built, but they haven’t been able to pour research and development into it to make them better. If they could, and they will at one point, they will be a lot better. We acquired parts from years past and built some, and that has been a big help. Their main business is dirt late model engines, and ours is kind of built on the side.”

Utilizing old parts from larger organizations has revived the No. 51 team. The Clements Racing Engines are build out of the Spartanburg shop, and also provide engines for JD Motorsports’ three-car unit. With an obvious deficiency of using old parts, the team has been able to make the most out of it, capitalizing on the handling of the car, which carries over to horsepower, especially on short tracks.

But this year, there was a major change in the team’s shop. Ricky Pearson, winner of two Grand National Series titles with his brother Larry Pearson in 1986 and 1987, began working with Clements in 2007. The pair developed a close relationship, which led to Pearson joining forces with the team on a full-time basis in 2011.

With his father, David Pearson, who is second on NASCAR’s all-time wins list with 105 victories, suffering a stroke late last year, Ricky opted to leave the pit box. The opening left Clements searching for a crew chief. But after learning from the Pearsons, who worked together as a family for numerous years, he opted to go with his father, Tony Clements, as the leader of the No. 51 car for the 2015 season.

“There are some areas that I wanted him to improve at and he has,” Clements said about working with his father. “He is making great calls. Another factor is that we have Brandon Benesch. He is the spotter for us, and he used to be the car chief for Danica Patrick in this [Xfinity] series, and he actually spots for Danica, too [in the Cup Series]. I told him this year that we don’t really have a crew chief, so just help us with the calls and he has been a great help. Both he and my dad have been great with their strategy and making the car better adjustment-wise.”

As Clements’s success continues to speak for itself, he is looking for opportunities to move to the next level. He has received multiple offers to race in the Sprint Cup Series, but for low-budget operations that run outside of the top 30 on a weekly basis. With $300,000, he said that he could race the No. 33 car in Cup, which is split between Joe Falk’s Circle Sport Racing and Richard Childress Racing whenever sponsorship comes around to run one of its XFINITY Series drivers in it.

“I’d love to be in Cup,” he said. “I feel like I deserve to be. I feel like I’m a good driver and I can do a great job for a team. I have never really had the opportunity to race for a big team. I’d like to keep doing what we are doing. Hopefully, we can build a top 10 team. Maybe we can get some Cup races with a good team and run Cup, too. I’m a racer and I love to race. I’m very fortunate to be here and don’t ever forget that each week. I’ll tell you what – it can be taken from you any moment.”

As this small team looks to continue its success, it is still on the hunt for sponsorship. The team works with small companies for the majority of the season, which enables them to connect to one another at the track and away from it.

When meeting with sponsors, Clements takes them out to dinner with his family – getting to know whose logos they are putting on the car. Unlike major teams, he says he provides a way to cater to sponsors, helping get them adjusted to the NASCAR lifestyle.

Continuing to make the most of every opportunity he has to strap in behind the wheel of his black and white car, he believes the chance will come soon to race for a larger team, or at least build this one to the point where they can contend for wins. The only other driver to finish in the top 17 in each of the last six races is Ty Dillon – that’s it. There have been some that are in the top 20 in each of those races, but not the top 17.

With costs on the rise in the Xfinity Series, Clements’s team has shown what it takes to survive. Capitalizing on every small opportunity has enabled this team to continue, and it has grown immensely since it began. Thus far into the season, he is averaging a finish of 16.8, and if all continues at this path, he will be inside the top 10 in the standings before the years comes to a close.

Thanks for writing a story about Jeremy Clements and his team 51 !! This is a great bunch of people who really do deserve some one to pay more attention too them ! They need some people to know about them who can maybe

give them some sponsor help or know some one who can ! Those of us who are Jeremy fans try to donate a little when we can to help with tires , but we just don’t have the money to help the big things that need to be done !! Hope all the people who read your article today will help spread the word !! These are good people ! They have a really good Driver in Jug and are improving all the time !!thanks for the write – up !!

I had noticed Clements running better this year though the booth didn’t mention it much. Appreciate the article. Go Jeremy!