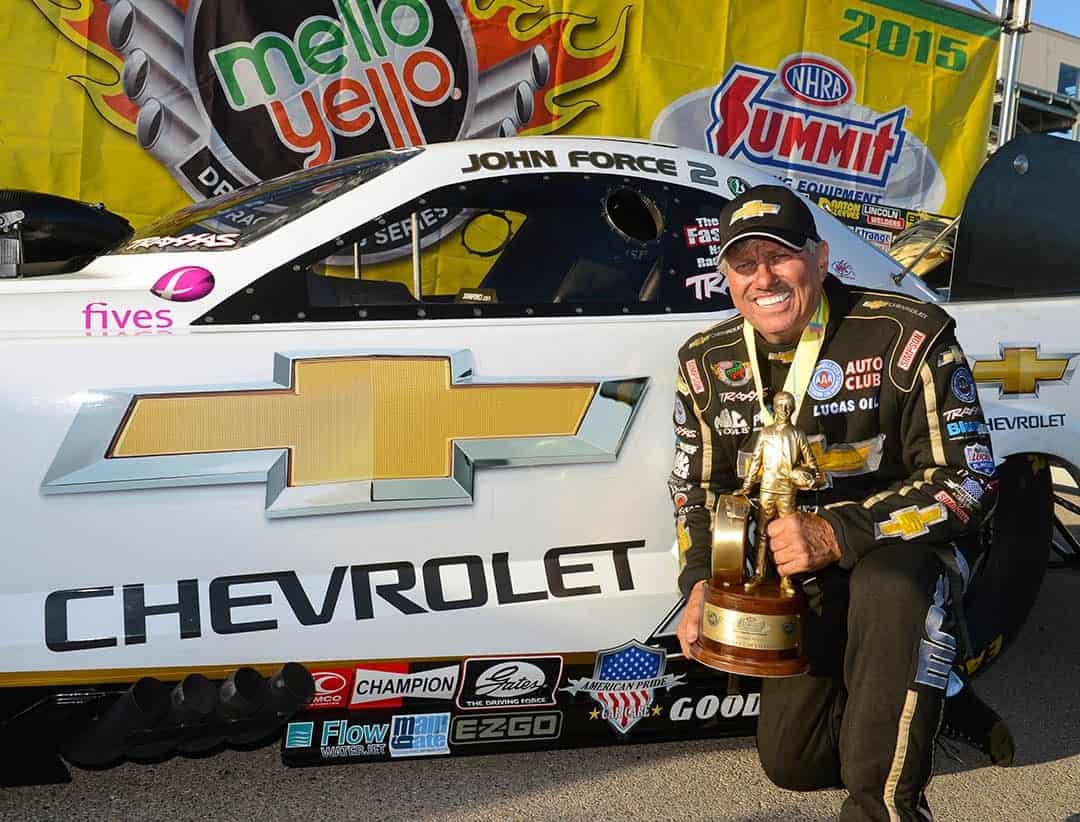 The NHRA has been running a “Baptism By Nitro” campaign all season, encouraging fans to bring along family and friends who have never been to a race. The thinking is that once they see, hear and feel NHRA action in person they will become fans too, and it’s not a bad plan for the NHRA. The sport absolutely plays better live than it does on television, and I have met more than one person who fell in love with it this way. I might be one of those people actually.

It’s an interesting question though, what makes a fan? Some motorsports fans are just car people to start with but some aren’t. Some wouldn’t know a spark plug from a brake pad if their life depended upon it. Does that have a bearing on what kind of motorsports fan they might be? Are the car people more likely to choose drag racing while the non-car people go with stock cars?

Ron Capps says he’d watch lawnmower racing if he were sitting at home and that’s what was on. His favorite thing to do when he’s not racing is watching OTHER racing, and he’s not the only one. Social media on heavy race days is full of people watching multiple channels and computer streams and Twitter feeds all at once. I’d like to think one of the things that makes Frontstretch a favorite to our readers is our coverage of a variety of different kinds of racing.

Other people can recite 50 years of NASCAR history but wonder what all the fuss is about that dancy guy named Hello… or something like that. Even they seem to know who John Force is though, even if they don’t really get what the big deal about driving in a straight line is.

The question though, is what makes a fan in the first place? What made YOU a fan? It would be nice if it were an easy question to answer. If it were, we’d never have to talk about TV ratings or filling seats or getting sponsors interested. We’d all just enjoy the shows every week. We’d probably still be talking about who has the best racing though.

LAST CHANCE TO ENTER! Win a VIP NHRA experience with Ron Capps and the NAPA Auto Parts team at the NHRA Thunder Valley Nationals in Bristol! Click here for more details and to enter.

Driver of the Week: Jerry Savoie

Some Things Most People Don’t Know About Jerry: We might need to rename this section to “Something pretty interesting about Jerry” instead, since this fact pops up in his sponsorship, but Jerry owns an alligator farm. His alligator farm was featured on an episode of The Discovery Channel’s Dirty Jobs when Mike Rowe checked out alligator farming. It makes Matt Hagan‘s cattle ranch look a little tame though.

Sometimes you see them, sometimes you don’t. The “them” in question would be the canopies on NHRA Top Fuel cars. Essentially they are a safety feature but right now they are not mandatory. Antron Brown, who does use one, talks a little bit about what they do, what it takes to put them on the cars, and why everyone doesn’t use them just yet in this weeks’ Tech Fact video.

For most of the racing world, racing trophies come in all shapes and sizes. Some are traditional, like the Martinsville grandfather clock or the Borg Warner, and some are obviously a nod to the race sponsor like a SpongeBob statue or a giant Cheez-It. Some are beautiful works of art and some are, well, not. Then there is the NHRA. Every racer, every week, in every class gets the same trophy. It’s always the Wally. The little brass man with the tire on the wooden base is a familiar sight at the drag strip. The name is a nod to NHRA founder Wallly Parks.

Boring, right? Who wants the same trophy all the time? Everyone, as it turns out. The Wally is the ultimate goal of an NHRA racer and it doesn’t matter how many one has, one always wants more. Some drivers toil for years before they earn that first one. Sometimes it’s the only one. Then there are others who have many, like Force, who has 142 of them, more than any other driver. What does a person do with 142 of the same trophy? Surely he’s lost track of a few of them over the years, right?

“The Wally trophies all mean a lot to me, every one that I’ve won over the years,” said Force. “I just hope I can win some more. I think it means more because it’s not ‘just’ a trophy that you’d go to a trophy store and buy. It’s something that’s identified with NHRA Drag Racing. Most of mine are at the shop, but I always carry one with me on the bus. When I look at them, I know I’ve accomplished something in the sport.”

The NHRA Mello Yello Drag Racing Series heads to the far north to New England this weekend for the Auto-Plus NHRA New England Nationals at New England Dragway in Epping, New Hampshire. The good news? This is not supposed to be a late night show but rather a dinner date, which is a relief to east coast fans.