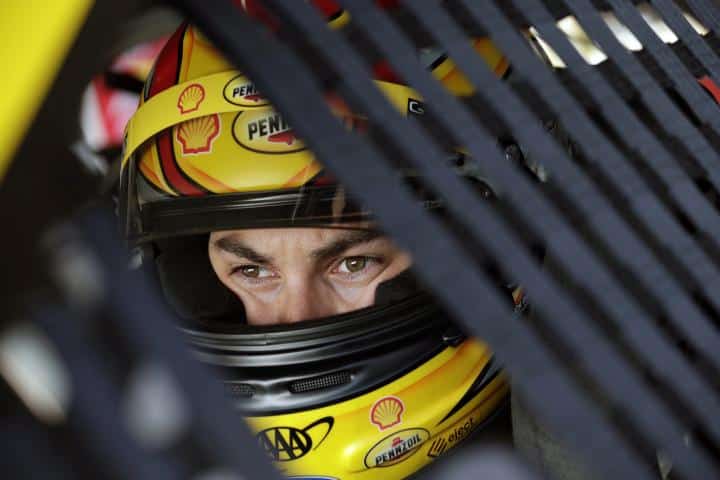 In a qualifying session that saw a lot of going, waiting and then going, it was Joey Logano, with a time of 37.183 seconds (193.637 mph), who qualified on the pole for today’s Great Clips 250 Xfinity Series race. However, he was a second away – literally – from qualifying second.

Chase Elliott ran a time of 37.150 seconds in the final round of qualifying, a time that would have given him the new track record at the 2-mile Michigan International Speedway and the pole for the race. But there was a problem: In the final five-minute session, he crossed the line to start his lap at 5:00:961 minutes. His time, as well as Kyle Busch‘s time, which would have placed the Monster Energy Toyota sixth on the starting grid, were both disallowed and both drivers will start 11th and 12th, respectively. Instead, Logano’s speed of 193.772 mph set in round one is the new track record.

Drivers played the waiting game in the final two rounds of qualifying in order to draft off of other cars around them and improve their time. In round two, four cars made single-car qualifying runs in the first half of the 10-minute session. The other 20 cars that advanced to the second round ran their fastest lap in the final minute of the session. The top 12 cut it even closer in the final round. Brendan Gaughan, the first driver to cross the start/finish line, crossed the line with less than 10 seconds remaining in the session.

Gaughan’s teammate Brian Scott qualified second with a time of 37.229 seconds, half a tenth off Logano’s final round time of 37.183 seconds. Darrell Wallace Jr., looking to rebound after a controversial finish involving teammate Chris Buescher in the Xfinity Series race at Dover, qualified third, followed by Kyle Larson in fourth and the defending June Michigan winner, Paul Menard, in fifth.

Gaughan’s time of 37.395 seconds was good enough for sixth fastest. Kevin Harvick trailed him on the track and on the scoreboard, qualifying seventh for today’s 250-mile race. Regan Smith qualified eighth at 192.277 mph. Ty Dillon, who was fastest in round two, was ninth fastest in the final round. Daniel Suarez was the final driver to make a lap in the session and will start 10th.

Being the first car in line proved to be a disadvantage for Buescher, who did not advance to the final round and qualified 20th. Denny Hamlin (13th), Aric Almirola (14th) and Elliott Sadler (16th) also failed to make it to the final round.

Qualifying was stopped once in round one when CJ Faison spun and crashed into the turn 4 wall. With 40 cars attempting to qualify for the race, all cars, including Faison, will start the race.