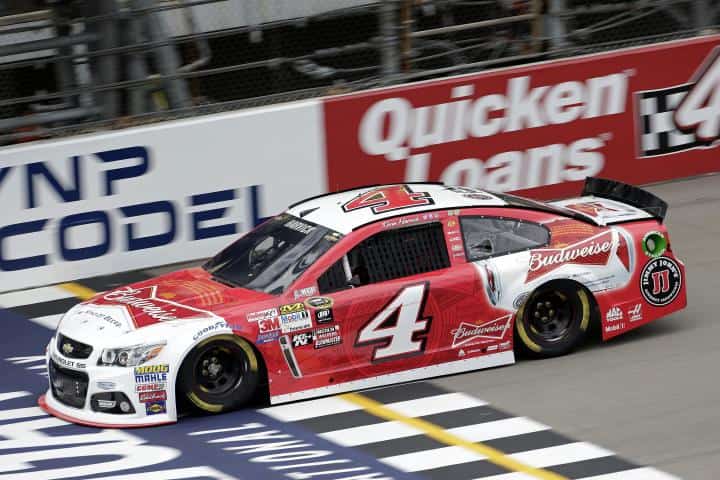 Something that the Sprint Cup garage has become accustomed to seeing is Kevin Harvick putting fast speeds in practice. He met expectations early on Saturday morning as he was fastest in practice at Michigan International Speedway.

The second practice session for the Quicken Loans 400 was originally supposed to be 55 minutes, but fog and mist delayed the session by 30 minutes. An abbreviated 30-minute session under heavy cloud cover did not stop the No. 4 Budweiser Chevrolet from posting a time of 35.806 seconds, a speed of 201.084 mph. Harvick, similar to last week in Pocono, was fastest in first practice and the first two rounds of qualifying on Friday. The driver that beat him in the final round and will start on the pole for Sunday’s 400-mile race, Kasey Kahne, was second fastest in practice and the only other driver to top 200 mph.

Kahne was not the only Hendrick Motorsports car to show strength in the opening Saturday session. Dale Earnhardt Jr. was just outside of the fast five in practice with a fast time of 36.107 seconds, which put him in sixth place. Jeff Gordon, looking to rebound from a disappointing race in Pocono, was eighth in practice at 199.313 mph. Jimmie Johnson completed the top ten with a time of 36.223 seconds (198.769 mph). Earnhardt Jr. and Johnson have won three of the last seven June races in Michigan, with Johnson coming into the weekend as the defending race winner. The last time the Sprint Cup Series was in Michigan last August, it was Gordon who went to victory lane. Two other drivers inside the top 10 were Denny Hamlin in seventh and Kurt Busch in ninth.

The third fastest Toyota and third-fastest Joe Gibbs Racing car in practice, Carl Edwards, was 11th in practice with a time of 36.239 seconds (198.681 mph). Tony Stewart was 12th fastest with a time of 36.258 seconds. Austin Dillon was 13th fastest, followed by Matt Kenseth and 2013 August Michigan winner Joey Logano.

Rookie Ryan Blaney, who qualified in the top 10, was 16th fastest in practice. Ryan Newman was 17th with a time of 36.398 seconds. Casey Mears, Brad Keselowski and Jamie McMurray completed the top 20.