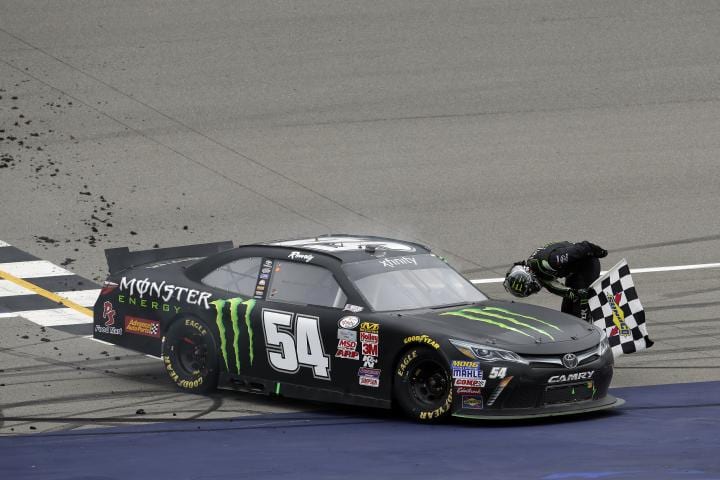 Some thought he wouldn’t race the rest of the year. Some though he would never be the same driver he was before. Others thought it was just too soon for him to come back.

Kyle Busch proved all of them wrong on Saturday afternoon at Michigan International Speedway.

After fracturing his right leg and left foot in the Xfinity Series season opener at Daytona International Speedway in February, Busch returned to the series for the first time just four months later, leading 27 laps en route to the victory in his first win — in any series — this season.

Busch has been back in the Sprint Cup Series since May 16, 2015 for the Sprint All-Star Race with mixed results, but Saturday was his first race back in the Xfinity Series, where he now has amassed a total of 71 career victories.

Busch was a benefactor of late-race contact between dominant driver Joey Logano and NSCS defending champion Kevin Harvick. The two made contact with just a handful of laps remaining and lost several positions, handing the lead to Xfinity Series regular Chase Elliott. Busch then reeled Elliott in, passed him with three laps remaining, and held the lead until the checkered flag. Elliott remained in second.

Harvick and Logano had to settle for sixth and seventh, respectively.

Chris Buescher was able to maintain the series points lead with a fourth-place finish and now holds a 25-point lead over second-place Ty Dillon. Elliott maintained third and is 35 points behind Buescher.

The race was slowed a total of eight times for 26 laps, including one red flag for a multi-car incident on lap 113. Logano led the most laps of any driver with a total of 54.

Next week, the Xfinity Series heads to Chicagoland Speedway for the Chicago 300. Coverage begins on FOX Sports 1 at 9:30 p.m. ET. Harvick won the last race at the track in September, while Elliott took the victory in the 2014 July race.

The “two” didn’t make contact, Harvick ran out of talent. Kyle needs to send him a big gift of some sort with a big thank you note wrapped in a pretty bow!

Wow, he has one win that he semi stumbled into in a year and a half and we are supposed to be impressed when Mr. Minors beats up on the second tier series drivers. What a jackass.