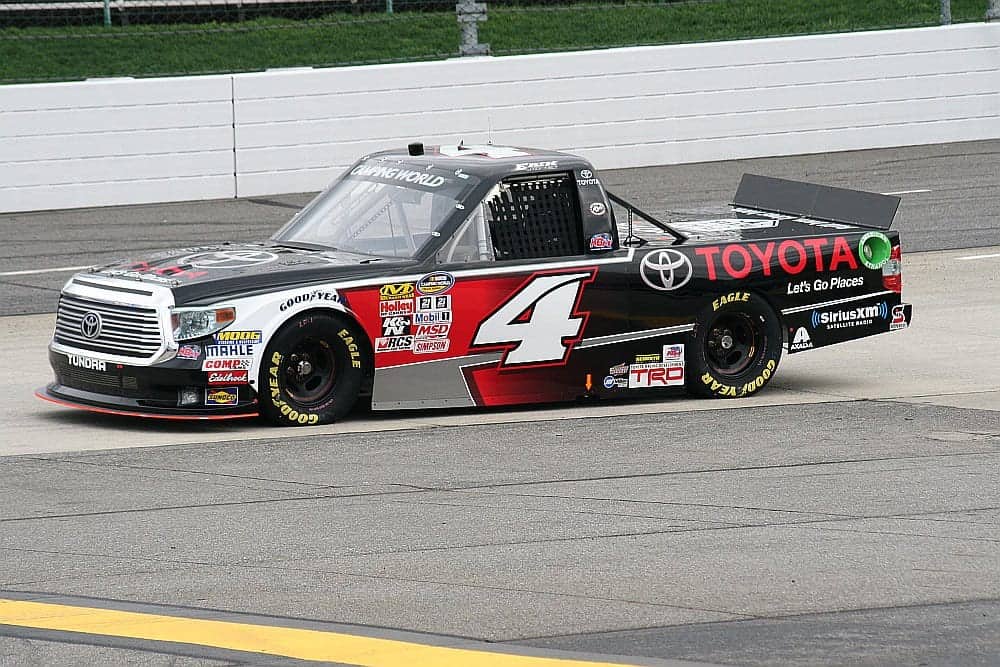 A short but heavy rain brought NASCAR Camping World Truck Series qualifying to an abrupt end at Gateway Motorsports Park – forcing the field to be set based on points.

With just a few laps on the board, Erik Jones jumped out front and was the fastest of the group. It was a continuation of the No. 4 Special Olympics World Games Toyota’s dominance from practice earlier in the day. At a speed of 136.766 mph during practice, Jones was faster than Custer’s record-setting speed during qualifying for the Drivin’ for Linemen 200 in 2014.

“I felt like we made improvements all day,” Jones said, after final practice. “We’ve got a good Tundra but we need a few more adjustments to be the best of the best. It’s going to be a tough race and really, really hard to pass.”

The outside pole position will be held by Cole Custer in the No. 00 Haas Automation Chevrolet. He was second-fastest in practice and believes he has a good ride for the race, but that wasn’t the case when he first went out on the track. Mired back in 14th for a while, Custer’s crew made several adjustments on the truck to help make it faster.

“I think we will be able to compete with Erik and everybody up there for the win,” Custer said.

Another concern is the new tire compound being used for the trucks at Gateway. According to Goodyear, the tire compound and combination is the same as was used by the Sprint Cup Series and Xfinity Series at Richmond earlier this year. The decision was made to use the set-up at Gateway to help improve grip by implementing the multi-zoned technology with two inches of inside tread that provides for better wear and heat resistance. The outer 10 inches is designed to improve grip, Goodyear stated in its pre-race notes.

Jones said there didn’t appear to be any wear issues with the tire combination, but he could notice a difference behind the wheel.

“They get hot and slick when you are behind other trucks and becomes pretty tough to pass after that,” Jones said. “That was kind of what I noticed when we ran this tire at Charlotte and a few other places. Once they get hot you can’t cool them back down.”