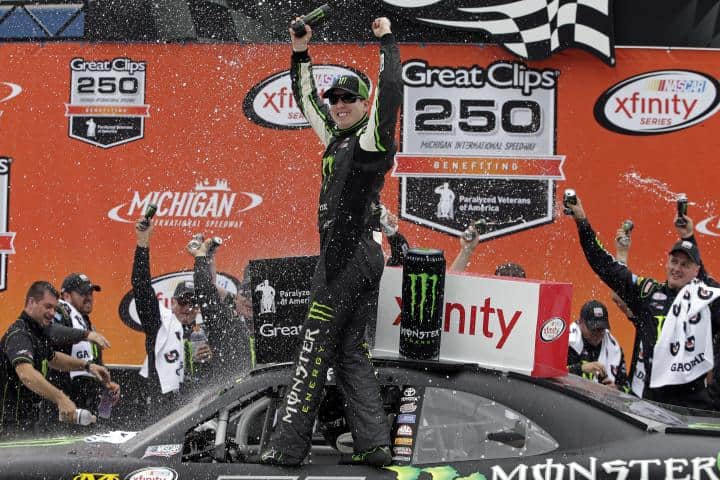 Well, that was fast. Back with a vengeance, Kyle Busch returned to the No. 54 Toyota for Joe Gibbs Racing on Saturday afternoon at Michigan International Speedway. The new father was victorious at the 2-mile oval, edging out reigning NASCAR Xfinity Series champion Chase Elliott with less than five laps to go in the Great Clips 250.

Following a crash that sidelined him for several months, Busch was back in a Sprint Cup Series car at Charlotte in late May, and has since shown he is nearly 100% healed. After running in the top five throughout the day, the 2009 Xfinity Series champion led the final four laps, producing his first triumph with crew chief Chris Gayle. Winning at Michigan gives him 71 for his career, and it is the 104th victory for Joe Gibbs Racing in the Xfinity Series.

Finishing second for the second time this season, Elliott is still searching for his first win of the year. He is now just 10 points behind Ty Dillon for second in the championship standings after 13 races.

Kyle Larson, who was running his fifth race of the year for HScott Motorsports with Chip Ganassi, finished third on the day. Recording his first top five since Homestead to conclude last season, the 22-year-old is looking to carry his momentum over to the Cup Series, where he sits 19th in points.

Championship leader Chris Buescher started 20th in the No. 60 car. However, he was able to move up through the field, and evidently led 23 laps during the 250-mile race. He has extended his lead to 25 points over Dillon after his triumph at Dover. His Roush Fenway Racing teammate Elliott Sadler finished fifth on Saturday afternoon, which marks his first top five since Phoenix in Nov. 2014.

After leading a race-high 54 laps, Joey Logano slipped to seventh on the final restart when he got loose with Kevin Harvick while the two were battling for the lead. Making his first start for Team Penske since Talladega, it was the first time this year that Logano has not finished either first or second.

During the event, there were eight cautions that spanned 26 laps. The race lasted one hour and 55 minutes after a short red flag was thrown late in the race for a multi-car incident. There were 13 lead changes between seven different drivers.

Buescher‘s top-five finish enables him to carry momentum heading into the stand-alone event at Chicagoland Speedway. The two-time winner this year is searching for his first Xfinity Series championship, and his Ford-powered racecar is starting to be able to compete with the Cup drivers on a weekly basis.

Aric Almirola finished in the top 10 for Biagi DenBeste Racing. The Cup Series driver for Richard Petty Motorsports was running in the top 10 throughout the day, but came on strong late in the going. Earning his third top 10 of the year while piloting the No. 98 car, Almirola is looking to bring similar results to his Cup ride, where he sits 12th in points.

Denny Hamlin ran out of gas during a green-flag pit cycle with 45 laps remaining in the race. At the time, he was running inside of the top five, but had to coast on the apron in his No. 20 car. Going two laps down, he raced his way back on the lead lap, finishing 10th for Joe Gibbs Racing.

Wallace was running very well early in the No. 6 car. However, he could not keep up on restarts, causing him to lose valuable track position. The Roush Fenway Racing driver ended the day in 15th after getting collected in a late-race accident with Paul Menard, Jeremy Clements, Reed and Cale Conley.

Entering Michigan, Clements had finished 17th or better in each of the last six races. That streak came to a halt when he slammed the wall in his family-owned No. 51 car. He ended the day 31st, which marks the first time this season he has finished outside of the top 25.

Suarez raced near the top 10 throughout the event, but struggled with the handling on his No. 18 car. The Mexico native had a tough time adjusting to the high speed track, which resulted in him spinning out on lap 103 in turn 3. He finished 20th, which keeps him narrowly inside the top 10 in the championship standings.

Making a return to the Xfinity Series, Alex Bowman ran rather well for Athenian Motorsports on Saturday. The Tommy Baldwin Racing driver signed a one-race deal while the team’s regular driver, John Wes Townley, is in Gateway for the Truck Series race. He finished 14th after competing just outside of the top 10 in the No. 25 car.

As Jeff Gordon‘s replacement begins to set up for his rookie season in the Cup Series, there is a lot of pressure on him to win another Xfinity Series title. Elliott now has six top fives on the year, and leads the division with 11 top 10s.

Meanwhile, Sadler’s first top five of the season is encouraging for his RFR crew. He has struggled to adjust to the Ford organization, and his No. 1 team is rather far back to legitimately compete for a championship. Michigan could be a turning point for him, especially since he has been very vocal about Roush starting to provide newer, faster equipment for the entire team.

Once again, a Cup Series driver won. However, unlike the past talk about a Cup driver winning a race this year, Busch’s victory is quite bitter sweet. It gives him a confidence boost for his Cup ride after being out for several weeks, and it could be what the doctor ordered to get into the Chase.

I hoped Chase would win. It’s better than a Cup driver winning.