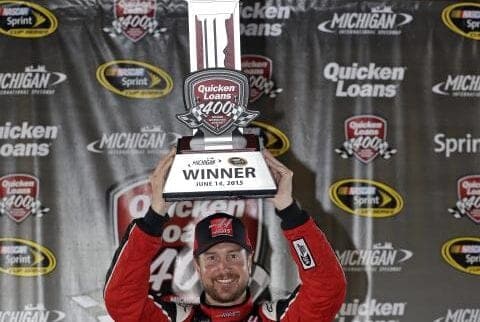 Sunday’s Quicken Loans 400 was a stop-and-go affair with four red flags and an ultimately rain-shortened finish on lap 138 by the frequent cycle of rain that dominated the afternoon at at Michigan International Speedway.

Kurt Busch, who retrieved the lead on lap 133 following a fuel gamble by Kyle Larson, led the final six laps to win for the second time in 2015 and third time at Michigan.

“It’s a team combination all the way around,” Busch said in a makeshift Victory Lane set up underneath the suites in the Michigan infield. “[Crew chief] Tony Gibson led these guys through a backup car and the pit crew was there giving their best. It’s an unbelievable feeling to know what we went through, we paced ourselves and found the lead toward the latter part of the race and then the rain came in.”

Since the driver’s return to Sprint Cup racing at Phoenix, the elder Busch has witnessed and appreciated the work of his Stewart-Haas Racing team, arguably now more than ever.

Gibson, for the first time in his 13-year career as a Sprint Cup crew chief, grabs a second win in a season atop the box of Busch. Gibson says the car needed only one adjustment before the car was “money” to the end.

“We wrecked our primary in practice and to come back with a back-up car and do all the work we did,” Gibson said. “We weren’t that good yesterday in practice so we made some changes overnight, kind of guessing it was going to get sunny and slick. We made one small adjustment that first pit stop and after that it was money.”

Dale Earnhardt Jr. started the race from the 14th spot and was also on the benefiting side of the rain-shortened event, finishing second in his No. 88 Chevrolet.

We didn't have the short run speed to beat em, so 2nd it is. Great car after 15 laps. We will work to be better next trip to @MISpeedway.

When the green flag waved at Michigan, there were two things certain to occur: Rain in the near future, as mean and dark clouds leered over the 2-mile circuit, and a fast car with Kevin Harvick.

Starting the race on the front row alongside Kasey Kahne, Harvick first took the lead on lap 43 and held it for a race-high 63 laps. The No. 4 was looking untouchable until a flat right-front tire on lap 122 brought the team back to pit lane shortly after their stop. The flat tire was due to an inner valve steam that was knocked off, an issue that plagued the team at each of the last two Sprint Cup races at Dover.

When the race was pronounced final on lap 138, Harvick could manage no better than 29th spot – just the second time through 15 races in 2015 outside the top 10.

The other two Stewart-Haas drivers of Tony Stewart and Danica Patrick struggled throughout the day. Stewart finished 28th and, despite being a lap down and outside the top 25 most of the day, Patrick led her first laps of the season and finished 16th.

As Busch continued to fight in the top 10 in the early stages, younger brother Kyle and crew were fighting with repairs in the garage as the No. 18 driver broke loose off turn 4 on lap 54 and over-corrected, causing massive damage to the right side. On the radio, Harvick said it was raining and the track was wet, and seemed to think Busch’s wreck may have been due to wet track conditions.

The damage was severe enough to end Busch’s day on the spot and dropping the 30-year-old to 43rd. With just 11 races remaining till the Chase, Busch will now have to climb out of a 173-point gap on 30th-place Justin Allgaier, plus win a race, in order to make this year’s postseason Chase for the Sprint Cup.

There were multiple stories that came from drivers who had impressive outings in the Irish Hills. However, you will have to look beyond the finishing order to notice most.

Ryan Blaney drove the legendary No. 21 Ford to a strong fifth-place qualifying effort which put the rookie in a great spot to contend for a great result. Running consistently in the top 15, Blaney got the bad end of the stick with pit strategy and the second-to-last caution, falling to 24th.

Unfortunate we didn't finish where we deserved. Got caught a lap down on pit road. Focus on positives and move on.

Ty Dillon made his sixth-career Cup start on Sunday and proved he had the will to last in the top 10. The 23-year-old broke the top five at one point and stayed in the top 10 for a majority of the afternoon and grabbed a career-best finish of 14th.

Trevor Bayne was the lone flower in the pot for Roush Fenway Racing as he benefited on the late yellows and rain to get back on the lead lap and finish ninth, his first top 10 of his first full-time Cup season and best result since Talladega in 2012. His teammates of Ricky Stenhouse Jr. and Greg Biffle had disastrous afternoons, finishing 25th and 36th, respectively.

In terms of the points battle for the Chase, a big gain was Clint Bowyer as the Michael Waltrip Racing driver came home 10th, cutting into the gap to 16th-place Ryan Newman down to just 12 points.

Brad Keselowski, Jamie McMurray and Paul Menard completed the rest of the top 10.

The Sprint Cup circuit will enjoy their second of three off-weeks before heading west to Sonoma Raceway for the first of two road courses in 2015.

Well that was a mess of a race.