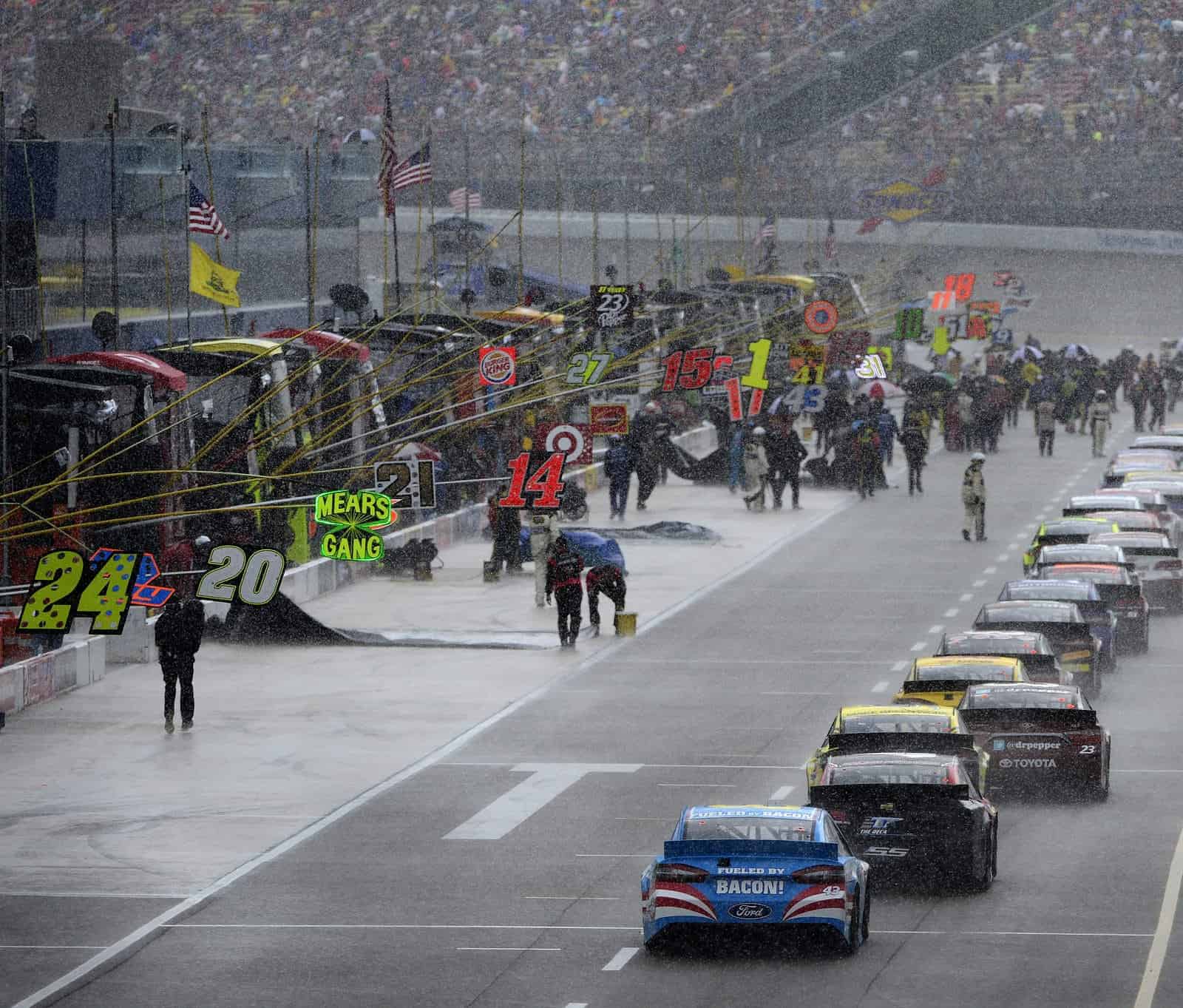 There’s the familiar adage that “When it rains, it pours.” Sometimes, though, that’s not always the case. Anyone who has watched racing for a while knows that it doesn’t take a lot of rain to slow or stop a NASCAR race. While it might delay the start or temporarily stop the action, eventually the cars can usually start rolling again.

This situation was the case for Sunday’s Sprint Cup Series race at Michigan International Speedway, which was red-flagged a total of four times for rain, a number that even the best statisticians and historians in the sport could not match in any prior race. That number sounds even more astounding when you consider that only 138 of the scheduled 200 laps were run, and 38 of those were under caution. In other words, fans in the grandstands and at home did a lot of waiting around only to see a very brief sprint to the finish and several strategy attempts by various crew chiefs to benefit from the unpredictable weather. It made the last portion of the race somewhat exciting, but getting excited about a rain-shortened race is hard to do.

And having a race end due to rain generally brings with it a lot of scorn from race fans, and understandably so. To have a race go green, yellow, red and back again so many times only to have it called fairly early in the evening is frustrating. Add that to the fact that so many laps were run under caution (only 100 laps were under green-flag conditions) and it’s easy to be left wanting for more.

I’ll admit I was one that was initially frustrated with the decision by NASCAR to continuously let the cars click off laps under yellow, especially in the beginning stages of the race. I figured the best decision would be to just red flag the race, wait out the weather, and give the fans as many green-flag laps as possible. The rain is going to be there whether the cars are on the track or not. Why not just stop the field and let the weather run its course?

The problem with that concept is that the race likely wouldn’t have made it past the halfway point before really heavy rain finally arrived. They just wouldn’t have run enough laps to make up the difference had every extra yellow-flag lap been eliminated. Then the race would have been moved to Monday and fans would have been really upset. “Why not do more to get more laps in?” many would have asked.

Additionally, NASCAR generated some criticism for calling the race at a time when there were still daylight left. The race was called right around 6 p.m. ET, though it usually doesn’t get dark in Michigan until after 9 p.m. Michigan doesn’t have lights, but with the Air Titan system present at the track, isn’t that more than enough time to get the track dry?

Again, though, it’s not that simple. First of all, it’s not like that final cell that eventually led to the completion of the race was your average rainstorm. There were severe weather advisories, watches, and warnings within the area, and calling that last system a “downpour” would have been underselling it. Visibility was lessened from one end of the track to the other and everything was soaked within a matter of minutes. NASCAR waited just long enough for the rain to stop and start again, still maintaining a nearly irrecoverable racing surface for the race to continue into normal daylight hours. Even with the Air Titan system at the track, it would have taken at least an hour to dry that track, if not longer, and that’s only after the rain finally stopped. At the earliest, that would have put the start of the race somewhere between 7 p.m. and 8 p.m. with 62 laps left which is getting dangerously close to sunset. That’s even with a best case scenario of no more rain and a smooth-sailing race with few (if any) cautions, let alone more red flags.

Even if it doesn’t get “nighttime” dark until after 9 p.m., that doesn’t mean that the setting sun leading up to that time wouldn’t decrease visibility substantially earlier than that. The sky doesn’t just instantly go from bright to dark, and the evening sky would have likely made it hard to see the longer the night went on. Again, that’s with no more rain, long cautions, or anything else. Is that really realistic?

Long story short, NASCAR really didn’t have any good options here. No one wants to sit around waiting for NASCAR to make up their mind waiting to make a call on the rain delay, but the last storm cell was going to be around for a while and you can’t blame them for not wanting to wait for the storm to come and go before making a decision. Even then, had they waited that long only to have to call the race for darkness after all that time, the irritation level would have gone through the roof for everyone.

Don’t get me wrong. I totally get the “Well at least they could have tried” argument. I really do. But there are a lot of people to think about in that instance. The teams, the crew members, the broadcast individuals and, yes, even the fans, had their own travels to attend to after the race. The risk vs. reward in waiting out the rain and darkness just wasn’t in their favor and pushing that boundary only to have the race ultimately cut short anyway wasn’t necessary.

No, I don’t have a crystal ball in which I can see the future as to what would have happened, but the timing for what the fans were asking for just didn’t work out. There were way too many “ifs” at play in terms of the weather, the remaining laps, and the remaining daylight for the “wait it out” call, to make sense and drag on another hours-long wait.

As much as it sucks, NASCAR made the best call for the circumstances they were working with, and sometimes the right call is still a crappy one. There just isn’t much they can do about the rain and they did their best to work around it in the time they had. I think they at least deserve to be commended for that, if nothing else.

Now, I don’t think it’s fair to ask that there be lights available at most, if not all, racetracks. Of course lights are expensive, but it would eliminate these struggles for daylight in weather-affected races, something that really seems silly in a day and age where tracks have electronic scoring pylons and upscale fan amenities. If we’re being honest, installing lights should be a foregone conclusion at this point, and it seems ridiculous that there are Sprint Cup Series racetracks that still have no alternative when a race runs long.

However, there was nothing NASCAR or MIS could do about that issue on this specific date and, for now, we should just swallow this bitter pill and hope the options for the sanctioning body are more promising the next time around.

Yes we know NASCAR does not control the weather, but damn..seems like they often cannot do anything right this year…is this one of those times? I dunno, Kurt is one lucky dude to be declared the winner for half a race. Interesting the brother basically lucked into a win by a Harvick (now normal magnet move to Logano) and Kurt had the rain Gods on his side. Did Grandma have some chanting going on this weekend? Again, the whole damn thing was a hot freaking mess. I think the schedule to have next week off it a much needed breather. What a crappy year so far. Glad fans and drivers are really voicing their displeasure, now if it actually amounts to anything, thats another story. But NASCAR better start waking up from their long slumber…It ain’t pretty what is goin’ on!

Much like an injured horse, I was glad NASCAR put a bullet in the head of that debacle called a race yesterday. For once it’s not their fault that the race sucked. This one is on the weather.

Don’t kid yourself. The network had as much if not more than the weather did in calling the end of that race. They probably knew via twitter feed they had lost 1/2 of their viewers to actual real-time action elsewhere, and was ready to move on into prime time programming.

Did I hear mention of a dead horse? Good cause I’ll take the opportunity to beat it. I assume everyone notices that when a race is threatened by rain, the propensity of NASCAR to throw soft cautions for our entertainment is heavily out weighed by their desire to get the race done on race day. Any normal race would have been stopped for no good reason when Gilliland smacked the wall and drove to the pits. I submit this as hard evidence of manipulation. Add to that another damning subtlety that I’ve noticed; when the debris caution flies I hear radio transmission from a team saying “caution for debris”. If the debris were a serious hazard don’t you think the radio chatter would be “caution for debris high in turn 4”? I wish more Sport Writers and Commentators would call this crap out. Just like when Rusty Wallace and Jamie Little called out Bowyer for spinning himself out. That crap had been going on for years but a couple of brave commentators at least slowed it and made the teams be more creative to conceal it. Take that Trigger.