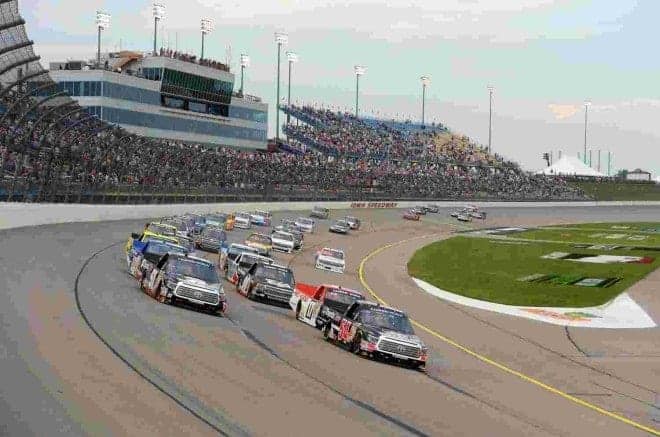 For the third straight week, the NASCAR Camping World Truck Series (NCWTS) field is preparing for an independent weekend.

NASCAR released the entry list for the June 19 American Ethanol 200 Presented by Enogen at Iowa Speedway earlier today (June 15). The list includes 32 drivers, meaning every driver will make the race.

The race in Newton, Iowa will be the third straight NCWTS race without a Sprint Cup Series driver competing, as NSCS drivers take advantage of their first off week since Easter Sunday in April.

In their place, series regulars and part-time drivers will get another chance to shine.

Sprint car ace Christopher Bell will make his NCWTS series debut, driving the No. 51 Toyota Certified Used Vehicles Toyota for Kyle Busch Motorsports. Bell, 20, is a developmental driver for KBM. The Norman, Oklahoma native has two victories in the new CARS Super Late Model Tour for the team in only three starts this season. Bell also competes in USAC and World of Outlaws.

Cole Custer will return to the No. 00 Haas Automation Chevrolet for JR Motorsports, a week after giving the team their second win in Gateway. Custer, 17, has two career NCWTS wins in only 12 starts.

Austin Theriault will return behind the wheel of the No. 29 Cooper Standard Ford for Brad Keselowski Racing. Brandon Jones will drive the No. 33 Chevrolet for GMS Racing.

The NASCAR Camping World Truck Series will return to action at Iowa Speedway on Friday, June 19, with a lone practice session at 11 a.m. ET, followed by Keystone Light Pole qualifying at 5:45 p.m. ET. Coverage of the American Ethanol 200 Presented by Enogen will began at 8:30 p.m. ET, on FOX Sports 1.

Aaron, Since nobody else is watching this mess anymore could you turn out the lights and make sure the door is locked on your way out.