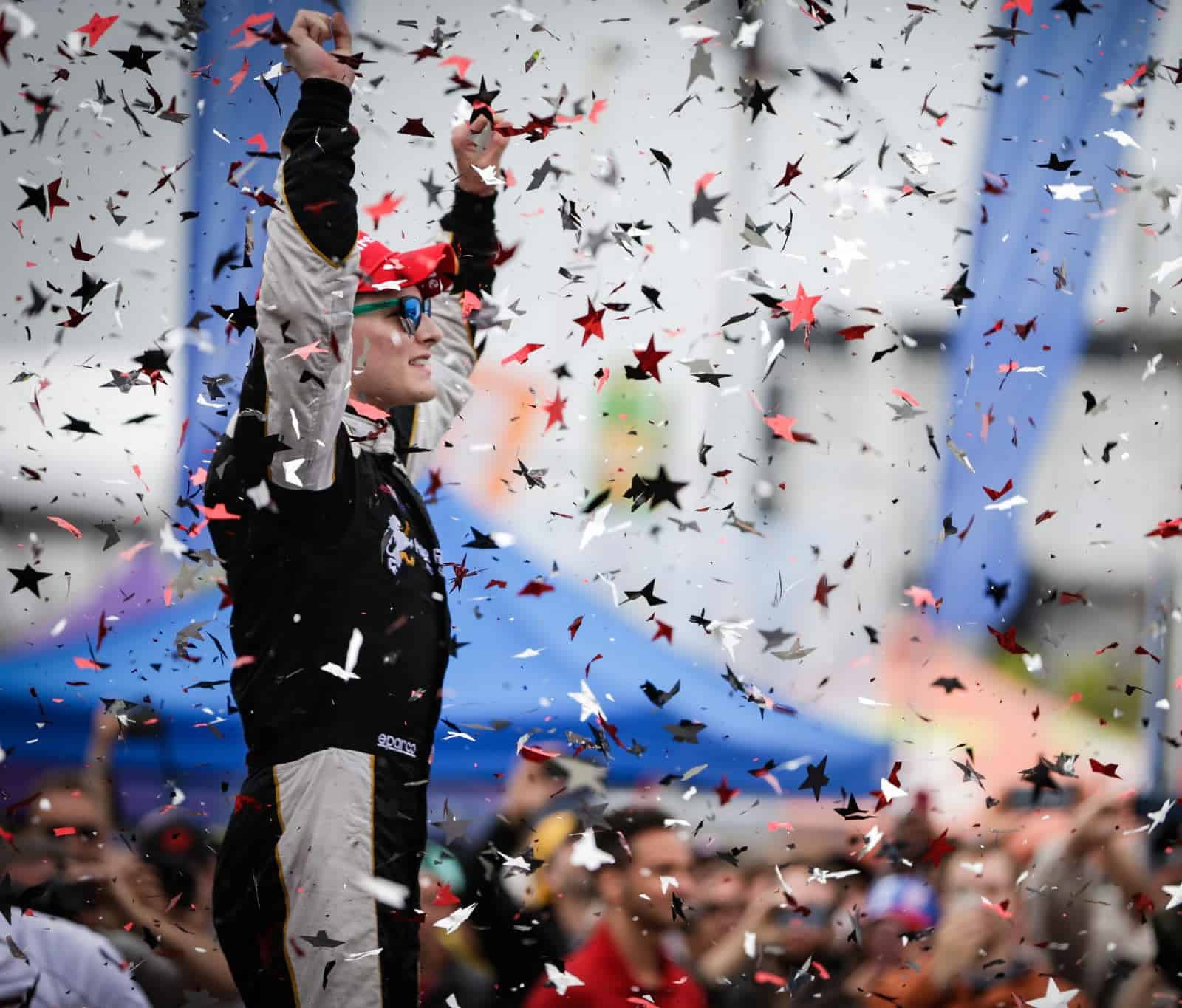 After a double-DNF in Texas, Carpenter-Fisher-Hartman Racing rose to the top of the Verizon IndyCar Series in Toronto.

Josef Newgarden, who had suffered 21st-place finishes at both of the previous two races, drove from 11th to the lead in the No. 67 Hartman Oil Chevrolet to win the Honda Indy Toronto.

Newgarden was followed across the start-finish line by his CFH Racing teammate Luca Filippi, giving the organization their first 1-2 finish. The two drivers had combined for only one top-five finish the on the year before Sunday’s race, with the lone previous result being Newgarden’s win at Barber Motorsports Park.

The 85-lap race began in wet conditions, after heavy rains pounded the 1.755-mile, 11-turn course. In an effort to minimize accidents, INDYCAR officials declared a wet start. The field rolled off single-file, with polesitter Will Power and Team Penske teammate Simon Pagenaud leading into the first turn.

Power and Pagenaud surged out to an early lead, but behind them things got dicey. Stefano Coletti and Tristan Vautier made contact in turn 3 on the opening lap, but both drivers continued on to keep the race green. Points leader Juan Pablo Montoya and Scott Dixon had a close call on lap 7, with Montoya overshooting the corner and losing five positions.

Despite many close calls, the race stayed green. With the track drying, Marco Andretti first stopped to pit for Firestone Red slick tires on lap 9. The rest of the field followed Andretti’s lead by pitting for slicks over the next laps.

On his out lap, Jakes lost control of his No. 7 MediaTech Honda and slid into the turn 5 tire barrier, bringing out the first full-course caution. The leaders – save for Helio Castroneves – were forced to pit under the yellow, allowing Newgarden and Filippi to rise through the field.

Castroneves shot out to the lead on the ensuing restart, but was forced to pit when a second full-course yellow fell for an incident between Coletti and Charlie Kimball on lap 41, giving the lead to Newgarden.

Newgarden would hold the lead over Filippi until making his final pit stop on lap 57.

As stops cycled through, Newgarden found himself in second behind Dale Coyne Racing’s Rudolpho Gonzalez. Gonzalez, who had never previously led a lap in IndyCar competition, was kept out later than the rest of the field by Coyne for experience.

Newgarden would struggle to work his way around Gonzales, allowing Filippi, Castroneves and Power to catch him and battle for the win. Filippi would get to Newgarden’s outside once, but was unable to complete the pass.

Despite the challengers filling up his mirror, Newgarden was able to hold on. When Gonzales finally pitted on lap 72, the Hendersonville, Tennessee native drove off from his competitors.

Newgarden took the victory, crossing the start/finish line 1.448 seconds ahead of teammate Filippi.

The second-place result for Filippi was his best finish in 16 Verizon IndyCar Series races.

There were seven lead changes among six drivers in the race, which began on wet tires.

Despite the wet conditions, only two cautions fell on the day, for Jakes’s accident on lap 29, and for debris from Coletti and Kimball’s incident on lap 41. Only Coletti (crash) and Carlos Muñoz (mechanical) failed to finish the event.

The Verizon IndyCar Series will on June 27, when the field heads to Auto Club Speedway in Fontana, California for the MavTV 500.

Rain spiced up the race again this weekend. Pagenaud seemed to be the fastest early but once again, when he gets behind he doesn’t seem to be able to pass his way back to the front. Power made it back to third but Pagenaud, on the same strategy, fell back out of contention.