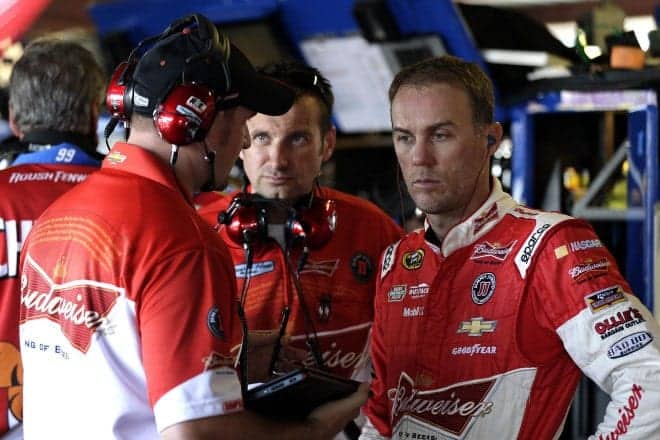 Kevin Harvick, NASCAR’s reigning champ, is enjoying an even better season on paper so far in 2015. He’s recorded 10 top-two finishes in the first 15 races; that’s keeping pace with Hall of Famer Bobby Allison (1972) for the modern-era record. With 1,225 laps led thus far, he’s on pace for 2,940, a number 37.5% higher than his championship-leading total last season. It would also be a Chase-era record, the most for a 36-race regular season and the highest number recorded since Dale Earnhardt led 3,357 laps back in 1987.

Clearly, Harvick and Rodney Childers are set on rewriting the record books. So why does it feel like this year, one where they’ve dominated the vast majority of Cup races feel like a series of missed opportunities? While the pair have two victories, they also have eight second-place finishes. That’s eight chances at a trophy (plus Michigan’s 29th-place “should have been,”) precious bonus points toward the Chase that have gone to another driver instead. Right now, teammate Kurt Busch has missed three races but he and Harvick would start the Chase tied in the standings. Should the season end today, the No. 4 team wouldn’t even be the top seed; that honor goes to Jimmie Johnson on the strength of four race wins and perhaps the label of favorite based on both past history and the racetracks where he’s had the most success (Dover, intermediates).

For their part, the Harvick-Childers duo has done its best to keep confidence and momentum rolling. So many teams and drivers would kill for the type of equipment and setups the pair are rolling out each week. But you can’t ignore the ones that have gotten away: the faulty valve stem at Michigan was the latest on a small list of mechanical malfunctions. The team’s driver-adjustable track bar has broken, costing Harvick a win at Dover; an engine change left them starting from the rear at Atlanta (Harvick fought back, leading the most laps there, but ultimately wound up in second). Bad pit strategy took away a win at Kansas, with Johnson pairing with crew chief Chad Knaus to snooker their rival on older tires. It’s a pattern we saw in year one, acceptable then for a new program, but not in year two.

Those small glitches have put a damper on what otherwise should be a march through history by Harvick. Considering parity among the sport’s top tier, the way in which two of Harvick’s teammates are underperforming at Stewart-Haas Racing plus the passing difficulties we’ve seen overall, the performance level is simply remarkable. But a season that should be the stuff of legends is instead wilting in front of us when you look at the victory total. In this era of NASCAR, weren’t we told wins were everything? Well let’s see how Harvick’s 2015 compares to some of the best seasons in modern NASCAR history…

One quick look at the stats tells you all you need to know. Harvick is blowing away his competition in almost all other categories, numbers made even more impressive by a current Cup field where 25 teams are capable of a top-five finish any given week (in the 1970s and mid-’80s, the number was close to half that). It’s the win total that looks puny by comparison, ramping up the pressure to perform. Could you imagine if the No. 4 car has some catastrophe during the first round of the Chase? A knockout blow that leaves them in position to finish no better than fifth in the standings? It’s the reality of modern NASCAR and its new elimination format system, yet it would leave a hollow taste in the mouth of anyone who has watched Harvick race this season. Heck, there are some tracks where the car is three-tenths better than their closest competition every lap. It’s a disparity simply unheard of these days, a reality that makes those second-place runs so much harder to swallow in private.

Let’s not forget that Harvick turns 40 this season, an age that often marks the clock ticking on a NASCAR athlete. Jeff Gordon? He’s retiring at age 44. Dale Earnhardt won his final title at 43. Harvick’s current teammate, Tony Stewart, is driving like he’s a shell of his former self at 44. The cold reality is even with Childers’ recent extension, there’s no telling how many more chances Harvick gets to make this type of impact. NASCAR will evolve; young drivers are eager to rise up. Dynasties, at this point in Harvick’s career won’t get a second chance to form.

That said, the road ahead for Harvick is clear: there’s still time to make his 2015 one of the great seasons in NASCAR history. The combo of equipment, driver, and crew chief continue to be the best out there any given week. Their position is so good, in fact it leaves Childers and crew but one assignment during the upcoming “off-week.”

They need to put NASCAR’s Closer back in position to close.

Tom, I think you let feelings override the facts. Bottom line, Childers is first in points right now so I can’t agree when you say “acceptable then for a new program, but not in year two”. Points totals are still the ultimate gauge of a team’s performance. Mistakes in the Bryan France era aren’t nearly as costly as they once were. Dominance in this era is constantly being negated by Brian’s cautionflagluckydogwavearounddoublefilegreenwhitecheckered philosophy. Pair that with a tight IROC like rules package and I’d guess 13 wins in a season is still possible, but not likely.

I hate to say this, but, as an unwanted throwback to the 2001-2010 Harvick has rooted vs. The 2011-2014 Closer Era. I think I am looking forward to a New Cup Sponsor and actually seeing great Non-Hendrick Seasons again and this is more of a Blue Cheese Moon Year, when Rusty had the Blue Moon Year in 1994.

In the end if it comes down to Johnson and Harvick my money’s on the 48. Why? Because unlike the 4 team the 48 team rarely misses opportunities. If Johnson and Knaus would have as many second place finishes as team 4 they would have turned them into wins. And Johnson still holds that Golden Horseshoe that Harvick would like to have.

I still go with points and Johnson is 70 points behind Childers/Harvick. That’s 70 opportunities that Johnson has missed this season and if he had as many second places as Harvick, he would be atop the standings instead of 5th place. I’d like to see Johnson win another title or two for what it’s worth these days just for the sake of history. It would put Johnson/Knaus as the best ever where they belong. 4 in a row, 7 or 8 total during the era of France’s constant rewriting of the rulebook to eliminate dominance and manufacture the illusion of competitiveness would be truly impressive.