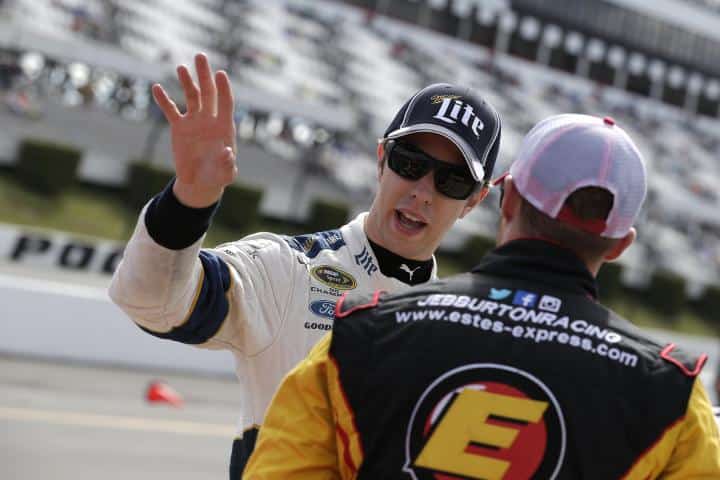 Frontstretch will scour Twitter and other social media platforms looking for some of the best posts from your favorite NASCAR personalities, media members and drivers from all across the industry. These were some of our favorite posts from this week and we hope you enjoy them too!

Kevin and DeLana Harvick are always posting cute videos of their son as he grows up big and strong. DeLana posted this video of Keelan, dancing to a song by Dirks Bentley. We have to say, Keelan is going to have a wide-range of talents available when he gets older!

One of the things NASCAR fans rarely get to see is the pit-road speed monitor. When O’Donnell is running the board at the track, he will occasionally capture a picture of the monitor when a violation occurs. In this case, O’Donnell captured this photo of what it looks like. Let’s just say – that is a lot of data captured by the numerous timing lines buried beneath pit road.

Looking forward to the off week and just hanging out at home with the family. 97*-99* everyday = #POOLTIME with the kids

Jamie McMurray already made his plans for the Sprint Cup Series off weekend this week. McMurray posted this tweet, saying he will spend his time at home in the family pool. This is what we wish we all could do too!

Steve Letarte got his first taste in the NASCAR broadcast booth this past weekend with a simulation run at Michigan. Letarte posted this photo, showing everyone how they do not wear shoes while in the broadcast booth.

With the drone-mounted umbrella, driver nor PR person is burdened with holding umbrella during a rain delay. #nascar pic.twitter.com/1KlcKiZoiN

Whenever it rains at the track, many public relations representatives will hold the umbrella for their drivers while doing an interview on television. NASCARCasm posted this tweet, saying they need drones to do the umbrella work for them. Maybe we will one day see this at a track near us in the future!

Man it's fun to be from Chicago. We love our sports! And we cheer for them all(think about it)! Tonight we revel in the Hawks victory! ?

Danica Patrick, a native from Illinois, is quite pleased with the Blackhawks victory in the Stanley Cup Playoffs. Patrick posted this tweet, showing everyone how happy she is of the result.

.@lwmiller88 is driving for the rest of the day. I can't wait any longer to try the local suds. pic.twitter.com/XGN3g6FMck

Dale Earnhardt Jr. put down the steering wheel and put his hands on this huge glass filled with beer. Earnhardt owns several bars, called Whiskey River, all across the United States. It is also great to see that the driver acknowledged he had a driver available that will get everyone home safe.

Brad Keselowski has found a new favorite show to watch with his girlfriend Paige. Keselowski, who can tell from this tweet that he’s not a fan of Lifetime shows and movies, will finally be able to break the ice!

Unfortunately, I don't believe that today's teleconference will be to announce Brian France's candidacy for the White House in 2016. #NASCAR

If you have been following a lot of news around the United States, you have probably heard the massive of candidates running for president in 2016. Brian Pokrefky, who is a journalist for numerous sites, posted this tweet about the NASCAR teleconference that is scheduled for today.