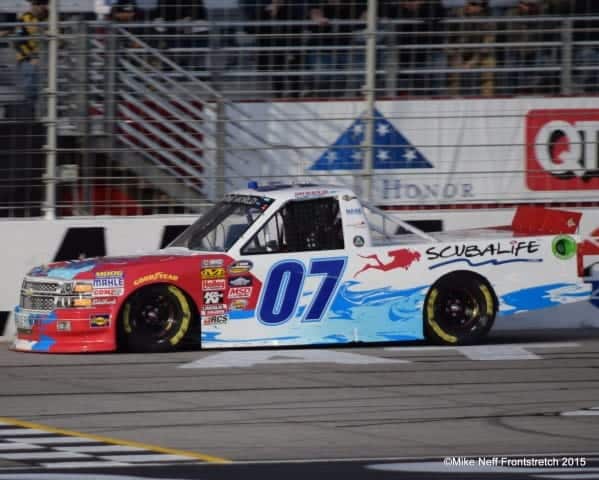 Plenty of NASCAR drivers are athletic outside of their comfort zone. Ray Black Jr., 24, is not your normal racer in the NASCAR Camping World Truck Series. Before he even thought about racing cars for a living, the Palm Coast, Fla. native was scuba diving with his father. Daring to enter the sea with many unknowns, he learned how to do things on his own.

Signing a part-time deal with SS Green Light Racing in 2014, Black ran seven races, finishing inside the top 20 twice (Chicagoland Speedway and Texas Motor Speedway). The strong results were enough to convince his sponsor to sign on for a full slate in 2015, and since then, he has led the No. 07 Chevrolet into the top half of the field. Until Texas, he was sitting in the top 10 in the championship standings. Now, Black sits 11th in points for the Bobby Dotter-run team.

Black spoke with Frontstretch at Dover about his young career, racing for Rookie of the Year honors, growing as a driver, his life as a scuba diver and more.

Joseph Wolkin, Frontstretch: How would you evaluate the team’s performance to start the season?

Ray Black Jr.: I think we have done a really good job at both ends of it as far as at the shop and at the track. There are a lot of things that both I and the team have to work on. They are doing a great job putting new trucks out for me. We are working on getting more sponsorship and things like that. So far, it has been a great season. We need some luck, though, to go along with these races. We have just been getting better each week, so it’s good.

Wolkin: What areas does the team need to improve on?

Black: It’s really just the small things that we might miss. We do in-house pit stops, so once we get a bigger budget and we are able to do pit stop practice, that will be huge for us. We are learning and growing, and it has been good so far.

Wolkin: Now that you have more experience after your first few starts last year, how have you improved as a driver entering this season?

Black: There’s been a lot of improvement I feel like. It’s still taking a lot of time. It’s my first time here (Dover), and I don’t even know what I am doing. I feel like I’m just going in circles at this point. Once I get into the race, I figure things out pretty fast. That’s because the team believes in me and they know it takes time for me to learn these tracks and get into a rhythm. They have my back and it’s cool to have them in my corner.

Wolkin: You are running for Rookie of the Year against guys like Justin Boston and Cameron Hayley, who are running for bigger teams. What does your program offer that some of these larger programs might not be able to?

Black: We have a lot of heart. I’m not saying the other teams don’t, but for a smaller team, doing well means a lot to us to be able to run in the top 10. We have a lot more on our plate, and for us to do well and run with those guys means a lot. Just to stay with those guys is a pretty good accomplishment when you have Erik Jones out there spanking everybody.

Wolkin: You are slightly older than some of the other rookie contenders. How does your age play a factor for you when you step behind the wheel?

Black: For me, I think it benefits me a lot because if I were 18, I wouldn’t have been good. I would have been too irrational, making dumb decisions and things like that. It is cool to be older and have that maturity level raised up. Age is a big thing in this sport. I don’t feel like I’m too old for anything, so I think I’m in a good spot right now.”

Wolkin: You have a deep passion for scuba diving. How did that get started?

Black: My dad has done it for his whole life. He got me started with it as soon as I could start at 11 or 12. It transpired into what I do now, and I get to do it for work and fun.

Wolkin: Did you ever think that your passion for that would coincide with your racing career?

Black: Not really. It is a totally different world that I fell into. It kind of fell into my lap. I liked it and I was good at it, so I pursued it. I never thought it would do that. It’s crazy.”

Wolkin: Is there anything that you have learned from scuba diving that might translate to racing?

Black: When you are diving, you are by yourself and when you are racing, you are the main guy everybody is counting on to get the job done. It is kind of the same reference as far as doing what you need to do in a timely manner. I feel like that is the same thing on the track. They are all looking up to me to do well on the track and giving them good feedback on what the truck is doing. They kind of have the same characteristics.

Wolkin: Are there any patterns that you have noticed with the truck over the past few months?

Black: It has been getting a lot better. We have been getting a lot better pieces. They have learned my style, and that is a big thing in this sport. They have kind of figured out what I like and don’t like. There are a lot of obstacles with me not being to most of these tracks, so that obviously plays a big role into it. They are trying to bring new things and new setups to these tracks. It is definitely a learning curve, but sometimes we get it right and sometimes we don’t. That’s what we are here for – to try to figure it out and do well.

Wolkin: How has your relationship with ScubaLife expanded since you made your Truck Series debut last year?

Black: It’s getting bigger. We are always trying to think of new ways to get ScubaLife out there and marketing it. I think we are building a good foundation in the Truck Series, and we hope to continue it. They are very supportive, and we do anything we can to help them out spread the word of what they are doing.

Wolkin: What does the future hold for you?

Black: I don’t know. We have had discussions about that in the past. We’ve kind of bounced back and forth – move up maybe, stay in trucks or both. Something tells you that you want to move up really fast because you are 24, but the other side of that is you don’t want to move up too fast and blow your opportunity. It’s all up in the air as of now. As far as money wise, I think no matter what we do, run trucks full-time next year. If we get the money to do the Xfinity Series, that would be awesome. It would be cool. The more races that I get to do, the better.

Wolkin: Are you expecting to do any Xfinity Series races this year?

Black: I think later on in the year we will embark on our first one. Probably Iowa or New Hampshire – something like that since it’s a 1-mile track, and just kind of get my feet wet. It will be pretty cool just to get in there to see what it is like. All of these guys move up fast. It’s the key in life, and that is what we are aiming for.

Wolkin: How do you expect the team to grow as the season moves forward?

Black: We are growing fast – the team and I. That’s exciting to see. Everything is starting to come together, and everyone is having a great time. I’m excited to see what’s coming.

Wolkin: Besides Daytona, where you finished fifth, what other races do you feel you have shown you are leaving your mark in the Truck Series?

Black: Atlanta was a good one for us. I think the mile-and-a-halves have been good for us in general. We are still looking for speed with the motor program that we have. It’s not the best, but for what we have and what we are doing and I think we are doing a great job. Martinsville was a great race. I have never been good at short tracks like that, but we came out of there with a top 15. Hopefully, we can get a little more money and we can get the motors that we need to run for top 10s.