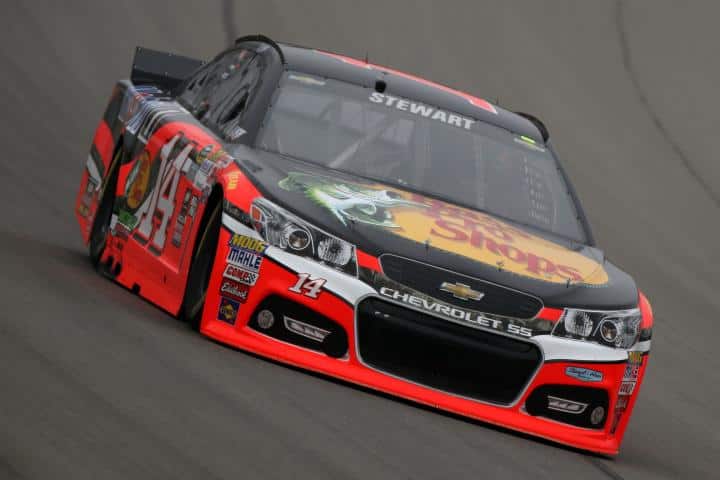 Welcome to the Frontstretch Five! Each week, Amy Henderson takes a look at the racing, the drivers and the storylines that drive NASCAR and produces a list of five people, places, things and ideas that define the current state of our sport. This week, with 11 races to go before the Chase, Amy looks at five drivers with the best chance to race their way in with a win.

Face it, probably the only reason Busch doesn’t yet have a win is because he missed 11 races this season. He’s good enough, and his Joe Gibbs Racing equipment is good enough. Yes, he is behind the curve on this season’s cars by a little bit, but the man can drive them and is only going to improve as he gets stronger. All three of his JGR teammates have a win this season, meaning the team can throw the kitchen sink at Busch for the next 11 weeks. What Busch can do is win races. What he cannot do is get in trouble which results in a backmarker finish, because he’s still outside the top 30 in points, and he needs to gain on eight different drivers every week in order to get there.

Where he’s most likely to get the win: Bristol or Richmond, where he’s got a combined nine wins to date. He’s also got two wins at Watkins Glen and runs well there.

After earning more points in 2014 than any other driver, Gordon is looking to close out his Hall of Fame NASCAR career on top of the world. His slow start to 2015 has been a bit of a head-scratcher, though it’s not as bad as some would believe. Gordon is 10th in points, and could slide into the Chase that way if we don’t see six more winners, but it’s a given that he’d rather win his way into the playoffs. He can, and should, do just that. We’re talking about a driver with four championships and more wins than all but two drivers in the sport, ever. It would be more of a surprise if he didn’t win a race this summer.

Where he’s most likely to get the win: Take your pick. Gordon has a combined 46 wins on the 11 tracks he’ll face before the Chase field is set, with Kentucky being the only one where he doesn’t. He’s got five or more wins each at Sonoma, Daytona, Indianapolis, Pocono, Bristol and Darlington, including seven at the Lady In Black alone.

Allmendinger proved himself a road-course ace even before his feel-good win at Watkins Glen last year, and his No. 47 team has run well at other tracks, though it hasn’t threatened to win. But without Marcos Ambrose as competition, he’s probably the favorite to win at the Glen and on the radar for Sonoma, and the series sees them both before the summer is up. Allmendinger won’t get into the Chase on points unless he hits an incredible hot streak, but he’s got a good shot nonetheless. Is he a championship caliber driver? No, but under these rules, you don’t have to be to make the Chase or even contend for the title.

Where he’s most likely to get the win: Watkins Glen, where he boasts a 7.3 average finish and a win and four top 10s in six races.

Kahne makes the list because he’s got fast cars. Ninth in points, he’s led just 41 laps so far this year, but Kahne has some of the worst luck on the planet. A win can spring up at any time when Lady Luck takes a break from beating up on him. Kahne and Hendrick Motorsports teammate Gordon are winless so far this year, but it’s not because neither is capable or they don’t have the equipment. While Kahne has never quite lived up to expectations at HMS, he has grabbed some wins, and teammate Jimmie Johnson has a series-leading four of them this year. There is reason to believe Kahne can win his way in, though he’s also in line for a points berth depending on how summer heats up.

Where he’s most likely to get the win: Pocono, where he’s got two career victories. Kahne also has wins at Sonoma, Loudon, Michigan, Bristol and Richmond, but he’s at his best on the fast intermediates.

Stewart is the hardest driver on this list to pinpoint. The way he’s been running this season, he’s a longshot at best for a win, likely his only ticket to the Chase, but at the same time he’s just too talented to write off as done, especially since he’s traditionally at his best as the days get hotter. Like Allmendinger, he’s not championship-caliber this year, but he’s good enough to make the show. Teammates Kevin Harvick and Kurt Busch have four wins between them and Harvick has the point lead to boot, so there’s no deficit in his equipment. It’s Stewart not firing on all cylinders this year, yet his past track record is still too good to ignore.

Where he’s most likely to get the win: Daytona, where he has four wins, all in the July race, and Indy, where he has two of them. He’s got five Watkins Glen trophies as well, but Allmendinger still has the edge there lately. Stewart has won three times at both Loudon and Richmond, so he’s got a shot there as well. Don’t count out Kentucky either, with a new rules package that should play into Stewart’s hand.

When push comes to shove, you can’t quite count any of these drivers out, either. McMurray has been consistently good this year and is currently the first winless driver who would get in on points. He’s also a threat to win, has kissed the bricks at Indianapolis in the past and is surprisingly strong at Sonoma. Menard hasn’t looked like a winner often, but he’s consistent enough not to quite count out, and he’s got a past win at Indy, too. Mears might be the longest shot on the list, but he’s such a strong restrictor-plate racer that you can never count him out at Daytona. Dillon has shown vast improvement at times this year and could sneak one past the competition. Bowyer is quietly outstanding at Sonoma.

Forget about it KyBu! What is the point of the TV gimmick, known as the Chase? I mean, why reinvent the game if TV stands posed to alienate fans by obliterating 1/3 to 1/2 of every race with ads, regardless of Nascar’s gimmicks? Now there’s yer problem! Only the NXS & CWT championships matter to me now. The Cup has been sold down the river! Go RFR!

Another chase article. Fan interest in the Chase is……..sorry, drifted off.