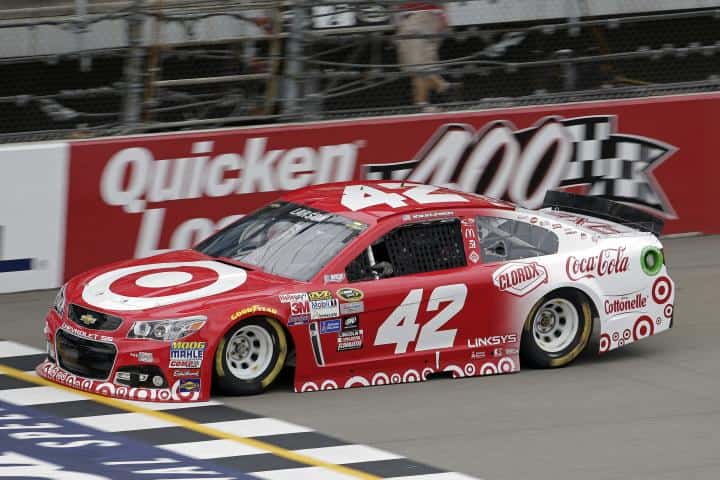 Rain was the star of the day on Sunday in the Irish Hills of Michigan. The on again, off again race that resulted in a rain-shortened finish and a total of four red flags worked its magic for Kurt Busch for his second 2015 victory. But for drivers like Kyle Larson, who gambled on fuel and had to pit just moments before the rain clouds opened up for the final time Sunday afternoon in Michigan, the day ended in disappointment.

It was a good day of racing for several Sprint Cup Series teams, including another solid finish by Pocono winner Martin Truex Jr., and three Fords in the top 10, including teammates Joey Logano and Brad Keselowski in fifth and sixth, respectively and Trevor Bayne with a ninth–place finish, his first top 10 since Talladega in 2012.

The rain also made for some pretty entertaining radio chatter from the drivers, crew chiefs and spotters, especially the back and forth between Keselowski and his spotter Joey Meier. Prior to one of the race stoppages due to the storms, Meier gave his driver a science lesson in why rain clouds are darker than clouds without rain. It’s worth a listen; check out the top in-car audio chatter from Michigan this past weekend here.

Now onto this week’s Mailbox questions from you, our readers…

Q: Hi Greg, how is NASCAR really going to change the Sprint Cup rules package halfway through the season at Kentucky? Isn’t that going to put all the teams (especially the smaller ones) at a huge disadvantage without testing? And how do you feel this new change is going to help things, racing-wise? – Ken D., Dakota, Ill.

A: Ken, thanks for writing us this week. This announcement that happened on Tuesday afternoon is huge. Not just for NASCAR and the future of our sport, but for every Sprint Cup Series team that will field an entry at Kentucky Speedway on July 11. There’s no question that this rule package change is going to take teams some getting used to. Never mind the time (or lack thereof) teams will spend in the wind tunnels in the upcoming days and weeks leading up to the race at Sparta, Ky., but the investment of money and resources by each team will be huge implementing these new changes to their Kentucky cars (and beyond).

Ultimately, NASCAR is hoping that the competition in terms of the racing we see on the track on Sundays will improve because of these changes, namely a much shorter spoiler height, a wider splitter and new Goodyear racing tires which will increase grip on the track. Improving the product on the track is something that NASCAR executives have said again and again is priority number one for this series, and by and large is something that I’m all in favor of.

There has been a lot of negativity surrounding the racing results we’ve seen weekly in the Sprint Cup Series this season. Seeing repeat dominance from the likes of Harvick, Busch, Jimmie Johnson, Logano and Truex each weekend has become tiring for some. Whether or not that is a notion you subscribe to, anything to help create a better product for fans is a great thing, and with the engine horsepower reduction and added downforce we’ve seen in these Cup cars for 2015, a change in the aero package just might be in order.

Like I said, the new rules package will be a lot of work for these teams, no matter the size of the shop. But what it can’t fix is the talent of the driver in the seat, and the resources of the team which is making these changes. The big boys of the sport (the Hendrick Motorsports, Team Penske, Joe Gibbs Racing, Richard Childress Racing, Roush Fenway and Stewart-Haas) will still have the lion’s share of resources, and talented drivers. The other mid-tier teams and then smaller, single-car operations will have even less, or none of those things. At the end of the day, the competition on the track will improve if NASCAR can create tighter racing, especially at the front of the pack for an extended period of laps. But it still all comes down to money and talent.

Q: Greg, what do you think about how Kyle Larson has run this year? As a fan of the No. 42 car I was pretty bummed out how the race ended on Sunday. I really think that team has enough talent to get a win and make the Chase. Wondering what you thought? – Ed S., El Segundo, Calif.

A: How do I think Larson has run this year? I think he’s underperformed honestly. However both the Chip Ganassi Chevys have had issues with consistency and finding speed all season long thus far, so it’s really not all on the sophomore driver who’s still searching for that elusive first career victory at the Cup level. It’s funny to think of Larson that way, because it sometimes seems like he’s been around for far longer and has done well that entire time, which isn’t totally true. He has been really good, with 22 top-10 finishes over his short career and victories in the Xfinity and Camping World Truck series. There’s no question (at all) that Larson is extremely talented behind the wheel of a stock car and is a rising star.

The gamble on fuel strategy that crew chief Chris Heroy took at the final laps before the fourth red flag that ultimately saw Busch take the checkered flag was a necessary risk that he and Larson really had to take to put their car in the position to win the race given the storm on the way. It just didn’t pan out.

Larson, as you know, finished 17th on Sunday after having to pit for fuel.

Larson has performed well this year, but those glimmers of hope for fans like you, Ed, have been few. His third-place finish at Dover a few weeks back was really big for that team. But pair that with the two DNFs Larson already has this year, including at a very winnable Talladega, and that puts the No. 42 in not such a great place going into the summer, currently 18th in points, sitting two back from the safety of the Chase for the Sprint Cup bubble.

Do I think Larson can win? Yes, he and that Ganassi team have what it takes to win at least one race out there this season. And I’d also say that Larson, in my opinion, will be in this sport for a long time to come and we’ll see him have great success. He’s just too talented in these cars not to win.

I admire & appreciate Nascar looking for improvements. I hope this produces the desired effect, but it seems like grasping at straws.
This down force reduction is said to be equivalent of 800 to 1000 pounds. Why implement this large, if not severe, reduction in down force without tire testing? Or were such changes looked into at “super secret test sessions” in the recent past?
Is it possible to gather a meaningful impression or a realistic data set about the new Kentucky aero changes if the tires (that have already been) made for this race were specified under different aero parameters?
And, is Nascar media rhetoric of “everyone is on board & communicating well” disingenuous? How can that be said if Goodyear made & will provide tires designed for an obsolete aero rules & has not been given an opportunity to optimize/revise tire specifications for the new aero parameters?
Imo KyLar in the same boat as Trevor Bayne. Neither has a grasp on how to race cup cars & both display questionable driving & decision making weekly & both would benefit from spending ’16 in NXS. I see Ryan Blaney winning before Larson, Dillion, Bayne or Stenhouse.

Perhaps the aero specialists needed something to do, and this change should help keep them busy. Might be hard to get time booked in a wind tunnel for a little while.