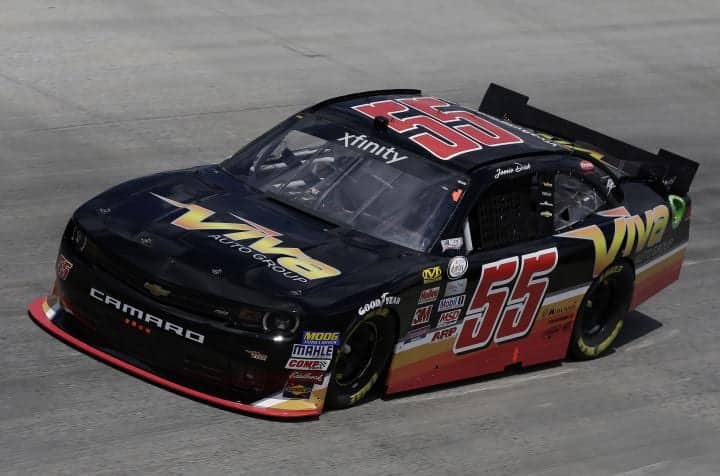 All it takes is one to start a trend. Just one, and all of a sudden you have a whole bunch following in your path. It is not something to be proud of, but that is just the state of racing in 2015.

Doors close. Employees are sent to the unemployment line, and few are able to find jobs with well-respected teams nearly halfway into the NASCAR season. Cars are sold and drivers are left wondering what the future holds. It is a scary time for many small organizations in the sport’s second-tier division.

It all began with Viva Motorsports, a single-car team owned by Jamie Dick. Diagnosed with Type 2 diabetes earlier this year, he had to take a step back for a few weeks. In the meantime, Jeffrey Earnhardt, one of Dale Earnhardt‘s grandchildren, took over driving duties behind the wheel of the No. 55 car. When Dick returned, the team had a rough few weeks, including hard crashes in three straight weeks.

The first wreck occurred in Iowa, where a piece of lead ballast hit his car, destroying it and striking his helmet. Fortunately, he was OK, but his car was not. Over the next two races, he had hard crashes that sidelined him before the race could reach the halfway point. That was when rumors began to spread that the No. 55 Chevrolet will no longer compete in the Xfinity Series. Earnhardt raced at Michigan, wrecked on lap 105 and that was the last time we will see a Viva Motorsports car on the race track.

The unsurprising move has left the series with one less team for the remainder of the season. Two drivers are unemployed, and their futures are certainly in question. Earnhardt will have options since he brought sponsorship from Fronius and FW1 Wash & Wax for a few races, and that partnership should continue if he finds a team willing to sign him. Dick won’t be as fortunate. His 60 Xfinity Series starts were backed by his family-operated Viva Auto Group, which is a car dealership located in Texas.

This is possibly the first of a select few teams that might be on the path of shutting down.

While looking at the back portion of the Xfinity Series field each week, there are multiple unsponsored cars. 13 races into the season, there is an average of 13.46 cars on the lead lap per event. Showing the large differential between the highly funded teams and some of the ones with less sponsorship, the division is suffering, and outside of the top 15, the competition is not strong at all.

Multiple times this season, we have witnessed just how bad the back of the pack is.

Dick’s car was hit by the debris that flew out from Ross Chastain‘s JD Motorsports (underfunded) car. The same happened to Carl Long, who was practicing at Dover when he was hit by a piece of tungsten from Peyton Sellers’s Obaika Racing car. Chastain’s team received financial penalties and probation for its crew chief, along with Sellers’ crew.

According to a post on Long’s Facebook page on Wednesday evening, he received multiple injuries from the incident.

“I have had some pain since Dover in my shoulders and ribs, found out my shoulder blade is fractured, and the ligaments connecting the collar bone and shoulder are misaligned,” Long said. “So that crash at Dover totaled the car, engine and put a hurting on me.”

Both issues were easily avoidable. However, when the small teams cannot keep up with the rest of the field, they go to volunteers for help. The people working on these cars are very talented. There is no doubt about it. But they are inexperienced, and not tightening parts into the car enough created two very scary incidents.

These teams are struggling, and having pieces fly out of racecars is nothing to joke over. It should be a giant red flag for NASCAR. Without verbally showing it, the small teams need help. It’s obvious. They are trying to make a living doing what they love, and they are teams that don’t start-and-park either. Imagine if that occurred during a race situation. What would the penalties be? What would NASCAR’s response be? How much does it hurt the team’s reputation? What about NASCAR’s reputation?

Fortunately, this is one of the few times that NASCAR can learn from the ARCA Series. Yes, ARCA.

This year, ARCA implemented the ARCA Ilmor 396 engine, enabling teams to re-use their motors for longer periods of time. Teams love it; it has leveled out the competition and is giving smaller teams a chance to compete with the larger ones for victories. Though it has its problems, like many things that are new, the power plant has provided a common ground for ARCA teams, one that NASCAR can and must learn from.

Partnering with an engine manufacturer that has no alliance with any of the three car makes involved in NASCAR, the sport can offer a more affordable engine package for the lower-tier teams. Making it an option instead of forcing teams to use it would be the perfect scenario. Instead of forcing small teams to go back to used parts to create engines, or even using ones from several years ago, these organizations can buy an engine at an affordable rate, enabling them to perform better on race day. This would be a bonus for potential owners, who struggle to find competitive engines unless they are leased from the major teams such as Hendrick Motorsports or Earnhardt Childress Engines.

“It’s $32,000 to lease from Childress, about $42,000 to lease from Hendrick,” said Jeremy Clements, whose team builds its engines using old parts from top teams. “We don’t have that, and there would be no way we could even race. Once you build an engine, it is a lot less, and most of these parts are used parts. We are able to build an engine a lot cheaper, and then we can keep it up and freshen it up every three races or so.”

These small teams will always be multiple steps behind the larger ones. That’s not a question. However, along with creating a similar engine package, NASCAR could also look into finding a way to build up-to-date chassis’ like the composite body, which also debuted this year in the K&N Pro Series and ARCA.

Evidently, NASCAR would have little trouble doing it too. The big teams with multi-million dollar sponsors will be unaffected since they can continue using their regular engines and bodies, and it enables these organizations with a handful of crew members to not have cars that break apart.

Ultimately, the sport’s goal is to produce the best package it can. The second-tier division is not meant to be cheap. But evening out the costs when there are short fields nearly every week is the ultimate goal for the Xfinity Series. If a driver like Clements could compete for top 15s on a weekly basis with a remade power plant, imagine what he could do with a fresh one that is similar to that of the top-tier teams.

Unless something changes, more small teams will continue to drop out of the sport. With costs at an all-time high, it is time to give the small teams a greater chance at competing. Without these small teams, the field would dramatically drop down to approximately 30 cars.

But with some change, there will be more cars of the entry list. People will be thriving about the Xfinity Series. Teams will find success. Drivers will have a way to get noticed without having $5 million in funding. Best of all, the division will be more competitive than ever before.

Joseph, I can’t believe you can state, truthfully, that the playing field is now leveled in ARCA! I want to LMAO! Have you taken a glance at the ARCA 2015 Rule Book and looked at the engine section for 2015? There are, currently, two engine-programs in ARCA, the ARCA/Ilmor/396/ChevyLSX vs the “open/legacy” engines from Dodge, Ford and Chevy. Now, lets us compare the engines. I will use a Ford, which cannot be an FR9, but has to be the 1990’s D3 version, and limiited to 358 CID vs. Ilmor/Chevy at 396 CID, Ilmor/Chevy runs 2015 fuel injection and computer controlled engine while open engines run a distributor ignition and normal ignition box with a chip for RPM control and and a 1990’s Holly on a tapered spacer. This is a “level” playing field? Come on.

Of course there are also penalties for bore spacing of the blocks from Ford, Chevy & Dodge. Oh, did I mention Toyota and their current V8 engine. It is not even legal, because of the very wide bore spacing designed by Toyota, when they developed a V8 for NASCAR. Triad Engines cannot power any ARCA car in 2015. None! Anything in ARCA with a Toyota emblem on it is powered by the famous………..ARCA/Ilmor/Chevy 396! LMAO over that one.

Joseph, how are you going to develope a NASCAR version of the Ilmor? It has to be based on some type of Ford, Chevy, Dodge or Toyota V8 engine, just like Ilmor uses a basic Chevy LSX. We all know the manufactures dump a lot of money into NASCAR and to have their Toyota out there running around with a Chevy under the hood. I am not sure if either NASCAR or the fans would buy into it?

Here is one ARCA fan who hates this with a passion. Mason Mitchell wins the 2014 ARCA championship with a lot of Ford-assistance from Nick Ramey, Roush-Yates engines and now we have ARCA/Ilmor. Checked the car-count, lately, at the ARCA races?

Good luck on this “spec” engine in NASCAR.

There are racing series around the world where if you look under the hood of say a Toyota (Ford is the same btw) you will see a V8 with valve covers with “Toyota” in big fancy lettering. Most fans smile and walk away – not realizing that they just saw a Chevy engine with custom valve covers saying “Toyota”.

BTW remember a couple of years ago when some of the budget teams were running SB2.2’s because they were cheap compared to the R3? Probably didnt make much difference other than to the bottom line.

In virtually every racing series you have the same problem. The folks at the back can’t afford to compete with the folks in front. Yet the power resides in those at the front. Not HP but political power with the series and rules makers. Why should they do sacrifice their advantage to help those in the back? Adding more competition is the last thing they want to do.
Its always been this way, and it wont change.

Golly, who wouldn’t want to spend a fortune to prop up the egos of a half dozen Cupholes. At least with boxers sparring partners get paid. In NASCAR’s lesser series the sparring partners get to pay to have the crap beat out of them. The true wonder is why anyone would spend the money to field a team to participate in what has become little more than Cup extended practice. Is anyone even watching this mess anymore?