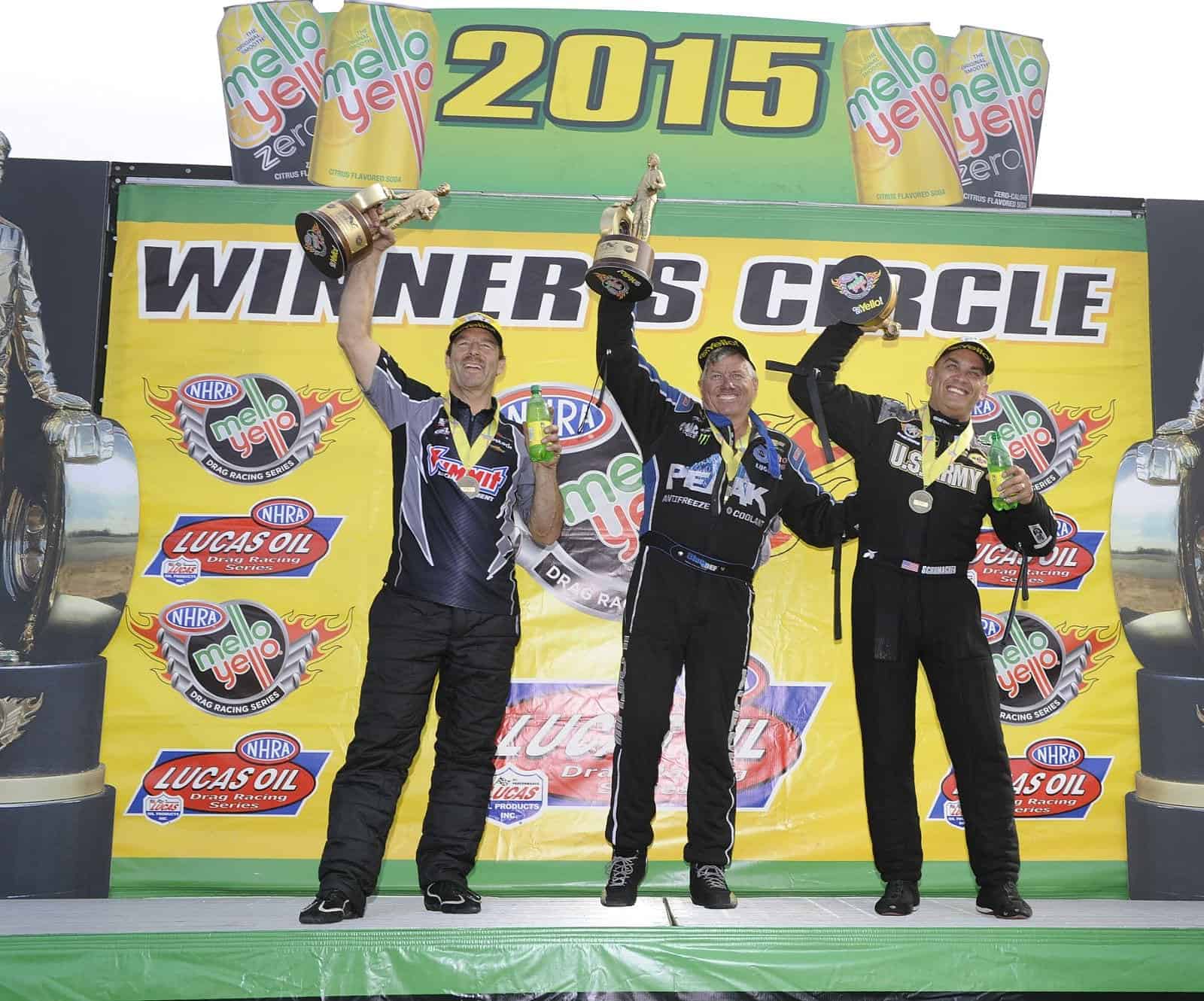 NHRA is a little unique among the major motorsports sanctions. Of the three Mello Yello Drag Racing Series winners last weekend in Epping, the youngest was Tony Schumacher at 45. Pro Stock winner Greg Anderson is 54 and John Force is 66.

It was not some sort of fluke that three drivers aged 45 and up won because all three are serious contenders for both wins and championships. Schumacher is the defending Top Fuel world champion. Force was last year’s Funny Car runner up and he’s happy to tell you he’s not ready to give anything up just yet. While Anderson missed part of last season after having heart surgery and ultimately missed the championship Countdown, he’s absolutely back in the winning form that’s led him to the title four times before, leading the Pro Stock points and scoring three wins so far this season.

Consider that in IndyCar, drivers racing much past 40 is unusual. In NASCAR, once drivers hit the magic 4-0 the talk always starts. When do you think he will retire? Certainly by 50 most have at least planned the retirement tour if they are still driving. Top rides for older drivers are few and far between despite the experience they bring to the table. It’s always been accepted that drivers past a certain age experience a drop in performance thanks to slower reactions and reflexes, but drag racing lives on those things so why does it seem less of a factor for the straight-liners?

“At 40 we just start,” said Force. “We’re not like NASCAR or IndyCar where you gotta drive around for two or three hours. Yes, you have to have the reflexes of a young man, but if you train yourself… I knew a lot of the champions that quit 20 years ago. A lot retire in drag racing at 40 or 45. 65 is a push, but I do it because I’m good at it, and surround myself with good people, and train for it. I keep my mind sharp.”

So perhaps it’s a question of stamina more than a question of reflexes after all. And perhaps in drag racing, when stamina is not vital, with all that experience garnered over years making passes down the track comes the sharpness of focus needed to really excel.

Driver of the Week: John Force

2007 – Sidelined for end of season with serious injuries from an accident in September in Dallas.

1994 – Became (and still is) the winningest Funny Car driver in Funny Car history.

Some Things Most People Don’t Know About John: It seems odd for someone who has been on the scene as long as Force for there to be anything people don’t already know, but Force has seen so much and done so much that he has an arsenal of stories a mile deep. Is there anyone who can tell it better than John Force himself? Let’s let him take this one.

Although Frontstretch primarily covers the professional NHRA categories, that’s by far not all there is to NHRA drag racing. In addition to the four Mello Yello Series categories and the Pro Mods, also a professional division, there are all the classes that make up the Lucas Oil Drag Racing Series, otherwise known as the sportsmen. They are what you might think of as the undercard at the Mello Yello Series events, but there are seven regional LODRS divisions and they each run their own schedule of regional events. The categories that make up the LODRS range from Stock and Super Stock racers that look like regular street cars to Top Alcohol Dragsters and Funny Cars that bear a strong resemblance to their Top Fuel counterparts.

The NHRA Mello Yello Drag Racing Series is on a busy swing into the hot summer months and continues on to Bristol Dragway this weekend for the Thunder Valley Nationals. You do not want to miss this one because it is one of five live shows on tap for this season.