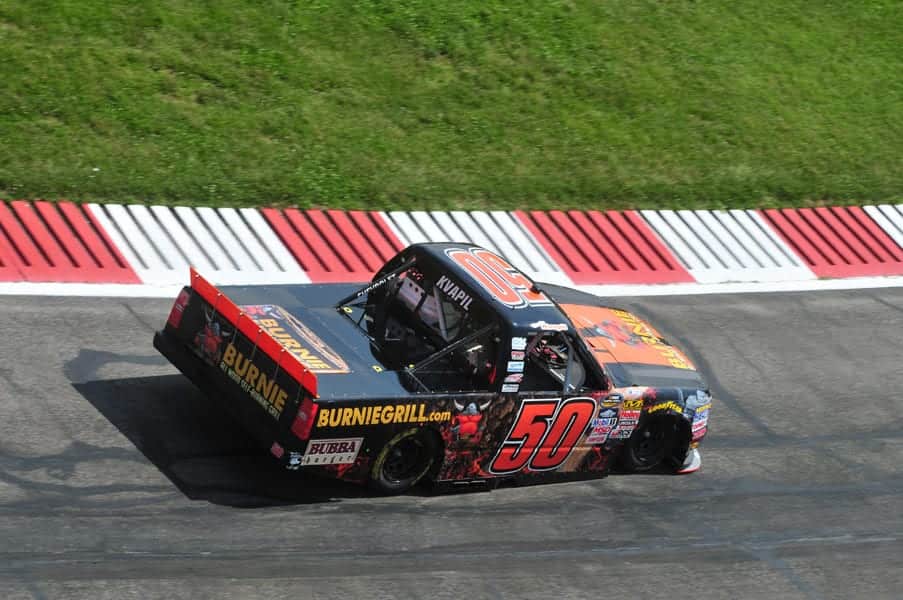 While the spotlight throughout the Camping World Truck Series continues to shine most prominently on drivers like Matt Crafton, Erik Jones, Tyler Reddick and many of the up-and-coming stars that are too young to race full-time, there are several other smaller teams throughout the garage making their races weekends work, regardless of the hardships faced. MAKE Motorsports is one of those teams.

The organization has been around since 2010, based out of Shelby, N.C., though it only had one truck through the 2014 season. This year, the team added a second truck, complicating the week-to-week logistics but allowing for a teammate to share information with and collect data from.

“We reached the point where we had enough sponsor support (to add a second truck). It made sense and was the next step for us,” co-owner Mark Beaver told the Shelby Star earlier this year. “Progress has been slow. This is a tough sport. But we’ve been lucky to have the team of guys we do. They work their tails off.”

“It was a lot of fun to be able to race against these guys. This showed what our team is capable of doing,” Kvapil said via a team release. “They are progressing. It wasn’t easy but we were able to get it done. The No. 50 Burniegrill.com Chevrolet was pretty good but a little tight. We now have something we can work on moving forward to Iowa.”

The hard-fought 14th wasn’t without its challenges, though, as the team had a brand new crew chief atop the pit box, and when I say brand new, I mean it was his first ever race as a NASCAR crew chief. Brian Lear, normally the truck chief for the No. 50 team, did his own version of double duty as he took on the role of crew chief too, along with the help of Amanda Beaver, who, outside of race weekends, serves primarily as the PR contact, and co-owner Mark, who focused on the tires behind the wall.

To compound the problems faced, the team struggled with early radio problems, leaving a pretty large disconnect between the driver and his team. While they were able to switch out radios for Kvapil under the first pit stop, Lear’s mic never worked, most likely due to the rain earlier in the day at the track. But with some assistance from Amanda in the pits – who often works on pit strategy, fuel mileage and overall race strategy – serving as the lines of communication from Lear to Kvapil, everyone banded together to overcome the issues thrown at them.

“Brian, Mark, and I were able to formulate plans for each stop,” Amanda said via email after the race. “With me being the only form of communication from the pit I had to make the final call and relay that to Travis as whether to pit, stay out, call him in to his pit stall, let him know when his stop is complete, etc.

If that wasn’t enough, fueling issues on the first two stops kept the tank from getting completely full and left Kvapil short of his fuel window. With those problems finally resolved and the help of a free pass, Kvapil was back on the lead lap and stayed there the remainder of the night, despite having a relatively inexperienced spotter, whose communications also cut out at certain parts of the track.

“When we had the fueling issues we were able to overcome them together,” Amanda said after the race. “Yes it was chaotic. Yes everyone had to do a lot of extra work. But in the end we were able to show what our team is capable of accomplishing when everyone just gets it done!”

Lear came out of his debut as crew chief sounding like he was pleased with the result, and why shouldn’t he?

“This was a very big race for us at MAKE Motorsports. We had to have a very good finish and a good run the whole weekend,” Lear said. “It was a big race because this was my debut as a NASCAR crew chief.

“We all pitched in as a team and did what we had to do to have a good run that night. Travis throughout the race just kept telling me what the truck was doing and what he thought adjustments needed to be done to the truck to make it better. It ended up being a really good night for us at MAKE Motorsports. So far this year, we’re doing all we can together as a team to make this company grow and be better.”

The underlying theme to pick up through everyone’s post-race comments is the amount of teamwork involved in the best finish for the organization, and the family atmosphere that MAKE represents is something that NASCAR needs so much more of.

“We have also as team pulled things together to make it work here at MAKE,” Amanda said about how the team works so well together. “Egos are left at the door because if not you won’t last long. It doesn’t matter if you just started or have years of experience everyone has something to bring to table.”

While one great finish does not make a championship contender, the 14th-place result is certainly a jumping off point for MAKE to grow from. The best part of it all is that the organization brings two rides to a series that’s otherwise struggling to keep a full field, free of start-and-park entries. And that alone is a huge reason for the organization to celebrate its success at Gateway.

It’s too bad the TV people choose to focus on one or two teams to the exclusion of all others.

Is that so bad since the stands and TV ratings seem to indicate that the people in the booth are the only ones still watching this farce?

I feel the Small Teams need to at least get a chance to be powerhouse,too.