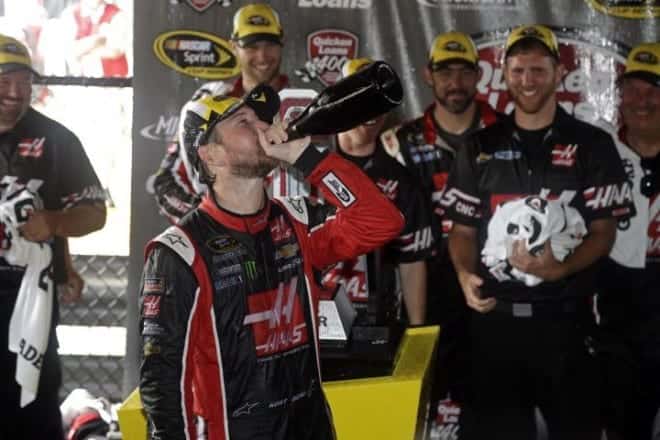 Kurt Busch took home his second win of 2015 on Sunday in Michigan with a convincing late-race run to the yellow flag that would prove to be the end of the race, as the deluge that fell from the sky was too much even for the Air Titan. He celebrated in a makeshift, soggy Victory Lane made soggier still by the obligatory champagne spray with relatively little fanfare. For Busch, the win meant a sure ticket to the Chase despite a rocky start to the season, which opened with the driver suspended for three races.

But even as he celebrated, there were whispers. No, not really about the nature of Busch’s earlier suspension; that’s mostly behind him now. About the nature of his win, because it was “only a rain win.” Somehow, to some, that’s not as good as a win in a race that goes the advertised distance.

And while surely it was disappointing to see the race end so early, just past halfway, it’s hard to call it a cheap victory.

Whether a race is rain-shortened, determined by fuel mileage or marred by a crash that takes out some of the favorites, let’s get one thing straight: the win is just as meaningful, just as good as any other. Whoever wins a race earned it, whether through raw speed, driving prowess or just plain strategy. It’s all part of the game. Over the course of miles of racing, some team, some driver, will make the one call that ultimately wins the race. 42 others will make calls that fall short.

Separate the race from the outcome for a moment. Sure, the rain itself is a disappointment. Everyone wants to see races run to the advertised end. Fans in the stand don’t pay for a ticket to sit around, wet and uncomfortable, in a poncho for hours. Folks at home don’t want to set aside an afternoon to watch a race only to watch damp drivers standing under their umbrellas talking to TV cameras when they should be on the racetrack, letting their cars do the talking. The drivers probably don’t like it much, either.

And the elephant in the room: yes, the outcome of the race might have been different if it the skies hadn’t opened, if everyone had enough fuel to make it to the end, if that bonehead in the lapped car hadn’t wrecked the leader. And it’s understandable, part of human nature to be disappointed that circumstances changed the game. It is, after all, racing. You want the best driver in the fastest car to win (or you hate him for winning because you believe your favorite is better and his car faster, one or the other) because in its simplest form, that’s what a race is.

But being disappointed because the race didn’t go exactly as it even perhaps should have gone and disparaging a driver and his team for winning under less-than-ideal circumstances are totally different things.

That means it’s perfectly acceptable when Aric Almirola wins in the rain, when Casey Mears emerges victorious on fuel mileage, when Matt Kenseth tops the field at Talladega after Tony Stewart throws and ill-timed block and wads up the field. There’s no saying they aren’t good enough to win because, well, they did win. They were good enough. Some days it’s about being in the right place at the right time, better to be lucky than good. As much as speed is part of the game, so too are strategy and circumstance.

It bears repeating: victory doesn’t come cheap in NASCAR. (Well, it might if it comes by way of dirty driving or a tricked-up racecar, but that’s a whole can of worms for another fishing trip.) There are no meaningless wins.

Separate the disappointment or surprise of an unexpected outcome from the outcome itself and it’s apparent that the circumstances don’t really tell the story. NASCAR records make note of rain-shortened races, but don’t diminish them for the winning driver. You won’t see an asterisk next to a driver who won a mileage race or because a big crash took out his rival or because the leader’s tire went down on the last lap. That’s because racing is about more than the fastest driver in the fastest car.

It’s about the crew chief who makes a gutsy call to take two tires when everyone else takes four, or four when the rest take on just two. It’s about finding an extra mile in the fuel cell and having the spinning car miss by inches. It’s about being in front when the rains come, taking advantage when the leader loses a tire or an engine. It’s about hours poring over notes and calculating how to work any situation to the best advantage.

Those things don’t come cheap. They cost a good night’s sleep. They cost frustration when strategy doesn’t work. They cost the pain of knowing a win slipped away. Sometimes trying to win even costs a livelihood or a life. For each tear of joy in Victory Lane, there are a hundred shed in private defeat.

But not one Cup win comes cheap.

Sorry, considering the amount of actual “race time” that actually occurred and how he really didn’t “dominate”, yeah I am calling it “a cheap win”…yes there isn’t any ***** in anybody win’s column, but come on. This one “victory” should slide into oblivion with some others. Yeah, you media folks talked it up, but we can move on now. Nobody will remember this race other than for the debacle it was.

I’ll just say that if you were running in the top 5 (maybe even the top 10) for the majority of the race that I wouldn’t call it a cheap win but if you weren’t and you happen to be handed a win when you basically sucked most of the race, then yeah, it’s a cheap win. Even fuel mileage wins are more legitimate than having the weather hand you a win. With that said, while I am not a fan of either Busch, he ran up front most of the race and had a competitive car so it may have been handed to him by circumstances but it’s not like he wasn’t a contender already.

One could make a case that ALL wins come cheap(er) now. A lucky dog, two wave arounds, and three GWC’s and suddenly a good but not deserving car wins a two lap race. It often leaves me feeling like a dope for watching the first 400 or so laps.