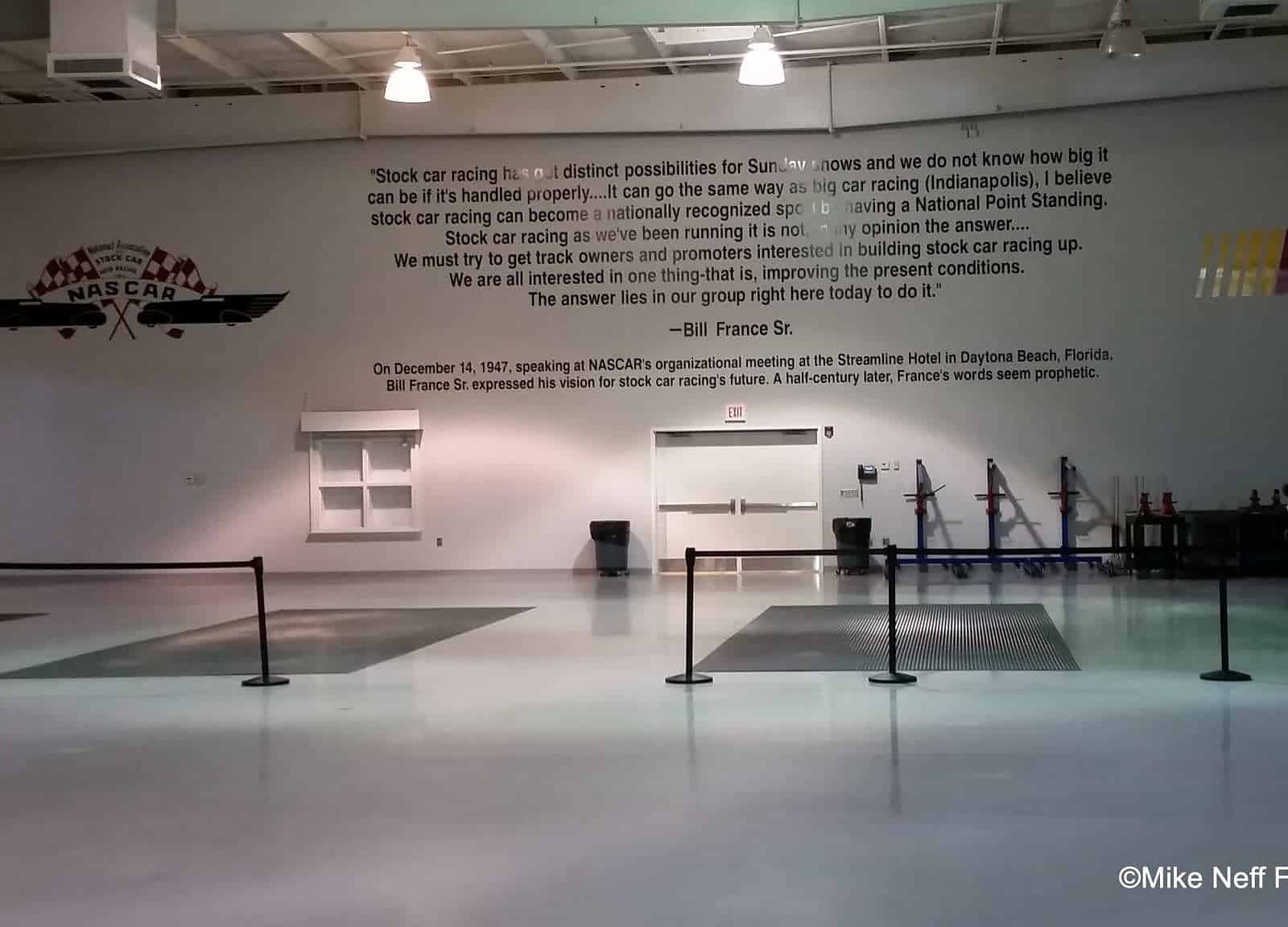 Friday morning before the Coca-Cola 600, Frontstretch was invited to participate in a media tour of the NASCAR R&D facility. The facility serves multiple purposes for the sport including safety innovation, which was the primary focus of the tour. It  also handles the post-race technical inspections, part testing, chassis certification, competition development and other special projects.

Thomas Gideon hosted the tour and provided overviews of all of the different areas that are utilized for safety development. Gideon is a seasoned engineer who spent 39 years at General Motors, primarily as a safety engineer in its racing program. He has been with NASCAR since 2009, heading up the safety research and development group. He now spearheads the continuous efforts of NASCAR to make the sport safer. Pushing cars to their limits will always be inherently dangerous, but that doesn’t mean you cannot strive to make it as safe as possible, after all.

The foyer of the center has a display case that holds 12 plaques commemorating patents awarded for items developed at the facility. The center has contributed to the development of head and neck restraints, SAFER barriers and the Air Titan, among many other innovations. One thing not lost on everyone who walks through the doors into the center is the words of Big Bill France that hang over the inspection bay, reminding everyone the purpose of the sanctioning body.

The tour began in the open inspection bay, where race winners, runnerups and random cars/trucks are brought for inspection. Depending on the given week and what was selected for inspection, the vehicles may be completely dismantled or only have certain parts removed. The purpose is to ensure that there is a level playing field for all involved in the sport. The at-track inspection is very thorough and covers a majority of the aspects of the cars and trucks that must fall within technical specifications. The work at the R&D center goes a little deeper and often delves into internal components.

One of the other big elements of the work at the R&D center is engine dynamometer testing. Periodically the sanctioning body will bring engines from each manufacturer in the sport to the center and run them on a dyno. There are two different dynos at the center, both of which are designed to test the horsepower created by the power plants. The testing process is extensive and the manufacturers are constantly pushing the envelope to gain more and more power from the limited motors that are in stock cars today. The dyno testing is done to ensure that while someone might have a power advantage, it doesn’t get to be an unfair advantage.

The other safety aspects of the facility are varied and thorough as well, for every aspect of the racecars. There are machines that push and pull on different materials and parts in order to ensure they’ll hold up under the intense forces exerted on a car during a crash. Windshields are tested with projectiles fired at high velocity to ensure they keep the driver as safe as possible. Helmets are also tested with items dropped at a high rates of speed, assisted by compressed air.

There is an engineering aspect to the center as well. The Air Titan is one of the most recent items produced by that arm. SAFER barriers were – and still are – an important item continuously developed by the engineers. The people in the engineering offices are primarily responsible for the patents that have been awarded to the facility.

NASCAR spent $10 million to build the facility, and the 61,000 square feet under the roof of the building have a direct impact on the future of the sport on a daily basis. From certifying chassis to verifying the claims of safety items before they are allowed to be placed in race cars, the people who work in the center constantly shape the sport and are directly responsible for the survival rates of drivers who go through incidents that just 20 years ago might have killed them.

Whether competing in the Whelen All-American, K&N, IMSA, Truck, Xfinity or Cup series, the vehicles and the safety equipment utilized has been touched in some way by the R&D center in Concord, N.C. The people employed there are some of the most innovative thinkers in auto racing. Many of them used to push the limits of the rules that were instituted by the sport years ago and now enforce the rules to ensure there is a level playing field from the cars winning to the cars finishing dead last.

It is a substantial expense for NASCAR but it is well worth it in the end.